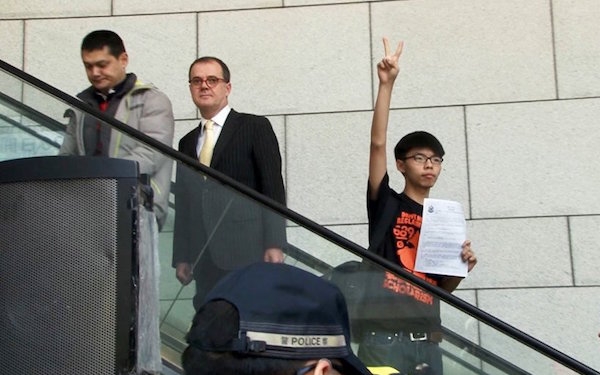 Maybe it’s just the wild and tumultuous political climate we’re in today, but it seems that now more than ever the underdog has a particular soft spot in viewers’ hearts around the globe. Disheartening images are all too often overloading our senses to the point of disruption, so when we see stories like Joshua: Teenager vs. Superpower, our spines straighten and our ears perk as we start to, not only imagine, but believe that hope is a tangible idea in this often dark world of ours.

Winning the Audience Award at this year’s Sundance Film Festival, Joshua is an underdog story that fits seamlessly into the narrative of today’s news story. It’s no secret that the Chinese government not only has a stronghold on its own people, but the world at large in many capacities. It’s hard to imagine anyone getting in its way when it really wants something, because, well, we’ve seen what happens when someone tries. That’s why when Joshua, an arguably regular teenage boy from Hong Kong, steps up to the plate to size the Communisty Party up, it stops everyone in their tracks.

Under British rule until 1997 when it was handed back to China with the caveat of retaining its own autonomous power, Hong Kong was a utopia for its citizens compared to their often-stifled Communist peers next door. So, when the Chinese government slowly began to implement its power in Hong Kong legislation over the next few decades, a growing sense of tension grew throughout the city. It was when the National Education program was announced, which would standardize all curriculum to meet certain patriotic standards, where our Joshua comes in to play; a boy with no experience in organizing protests or confronting politicians decides to stand against China’s encroaching hand by doing just that. And thus he takes Hong Kong by storm.

Over the course of Joshua, director Joe Piscatella places Joshua against the background of his rather normal upbringing. His parents are assertive, though not overwhelming in his school life, his friends are up to the usual gossip teenagers partake in, and Joshua just seems, well, like we all did back in those years.

Highlighting this kind of normalcy is key in demonstrating a huge aspect of Joshua’s protests; the fact that anyone can call to action and rally thousands of Hong Kongers, despite having no special credentials to do so, defining the ideal of what it is to be a citizen of this world. The fact that he confronts the largest and one of the most intimidating governments in the world, The Communist Party of China, is in itself remarkable. But what is more astonishing is not the outcome of these political battles—he does face both wins and losses—it’s the echo left by the people’s voice that rose to the occasion of civil duty.

An opportunity that Piscatella misses out on, however, is exploring Joshua’s personal life when its detached from this phenomenon he started. That’s not to say we need to dig into who he’s dating or what he’s had for dinner, but more so what he thinks about his relationships to his fellow protestors and how this rebrands his own personal identity. We actually hear from his peers in his student-run political organization Scholarism about his sometimes distant, cold personality, but it seems Joshua never gets to chime in his own thoughts about how being a prominent figure on a social platform affects your old ways of normalcy and turns it into something strange and big. As the main figure of not only this doc but of his movement, it doesn’t feel quite right to feel so detached from this rather singular character. He’s been on the cover of Time Magazine, but how does he feel about that?

That is ultimately the kind of feeling left after watching Joshua. We get to see an incredible young man rise to action and and win the hearts of not just his fellow countrymen, but the world. He gains recognition, as he should, but then gets branded on a couple of magazines, and at that point it almost seems we are left with him waving on a cover rather silently. His revolution is historic, his efforts unwavering, but with a little more time we could have learned what the boy behind the picket line really thinks about the boy fighting for his country.