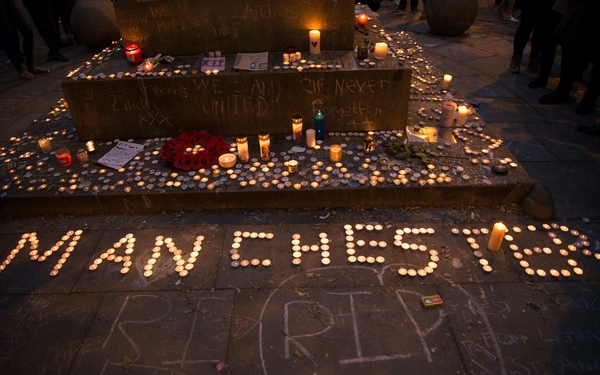 Candles, as a tribute for the victims of the Manchester Arena attack, on Monday, May 29, 2017 in Manchester, England. (Photo by Jonathan Nicholson/NurPhoto/Sipa USA/TNS)

Ariana Grande left Manchester quickly after the deadly bombing that followed her concert there a week ago, and now she’s returning in similar haste for a show this Sunday to benefit victims and their families.

The “One Love Manchester” show will feature Coldplay, Justin Bieber, Katy Perry, Miley Cyrus, Niall Horan and Pharrell Williams in addition to Grande, and will be held at the city’s Old Trafford cricket ground, publicists told the Associated Press on Tuesday.

Take That, which had to cancel a number of its Manchester Arena shows the week after the bombing, also will perform.

People who attended the ill-fated May 22 concert can request free tickets to see the show; regular tickets go on sale to the general public at 10 a.m. Manchester time Thursday.

Proceeds will go to an emergency fund set up by the city of Manchester and the British Red Cross.

In a statement issued Friday, Grande promised a speedy return to Manchester to spend time with fans and put on a benefit concert, but at the time didn’t give additional details.

Grande left Manchester and flew home to Florida almost immediately after the May 22 bombing, arriving at the Boca Raton airport Tuesday. On Wednesday, she suspended her tour through June 5, with seven shows affected.

Her next scheduled Dangerous Woman tour stop, after the benefit, is a June 7 gig in Paris.

Perry responded with thoughts and prayers for all the people at Grande’s concert, after the suicide attack that left 22 people dead and scores more injured. Perry said she was “broken hearted” for the families of the victims, for 23-year-old Grande and for “the state of this world.”

Bieber, who like Grande is managed by Scooter Braun, also chimed in last week, and British rockers Coldplay did the same.