Nick Jonas: ‘I always think I’m going to be fired the first day of a new job’ 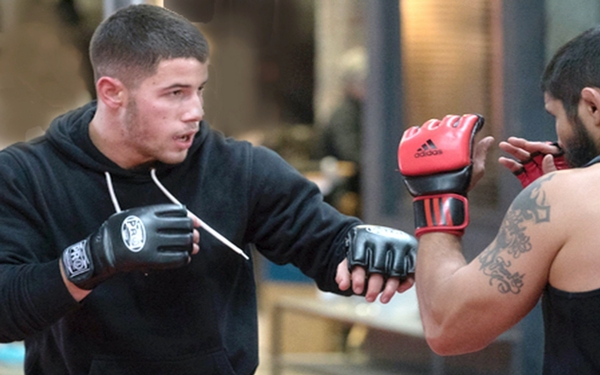 Nick Jonas costars as the conflicted MMA contender in Audience Network's "Kingdom," which returns for its final season on Wednesday. (Erik Heinila)

Though he’s been acting since he was 7, Nick Jonas says he still figures he’s going to crash and burn with every new role.

“I always think I’m going to be fired the first day of a new job,” he says, perched on the edge of a black vinyl couch in a meeting room here.

“Every time I start a new film or TV show or anything, my first reaction is, ‘Ah, I’m going to get fired from this.’ I’ve heard from other actors who feel the same way. But it’s part of the thing. It either destroys you or makes you great. You gotta lean toward letting it make you great, but not losing your mind in the process,” he says.

In fact, Jonas has been executing a balancing act between life and work since he was a little boy growing up in New Jersey. His first real prominence came not as an actor, but as a musician-songwriter with his two older brothers and their popular band, the Jonas Brothers.

He says there’s no discord between his love of acting and his passion for music. “I’m really fortunate to not have to choose so far in my career. Besides designating a certain amount of time for each project, there hasn’t come a situation where it was one or the other. The music, I’m somewhat flexible because I create my own schedule there. And on the film side, I can work my music around film and television. So there’s no conflict. On a creative level I think they really complement each other.”

While he’s costarred in shows like “Scream Queens,” “Hawaii Five-O,” and in the Disney Channel series with his brothers, “Jonas,” it’s his role as the conflicted martial arts contender in the AT&T Audience Network’s series, “Kingdom,” that really tests him.

“I was sent the script by my agent. I said, ‘I’d really LOVE to go and read for this.’ And he said, ‘Well, I’ll float your name, but I think coming from where we’re coming from … ’

At that time people associated him with the Disney Channel show and as a member of the band. “My brothers and I had reached a really high level of success, but we were at a really dull moment and had just broken up,” he recalls, crossing his legs at the knee and leaning back. “So it was not the best moment to hire Nick Jonas.

“But thankfully I put my head down and went to work. I worked with my acting coach and prepared for this audition. And I got called back and called back again, and eventually I ended up in a chemistry (test) with Frank Grillo.”

Grillo plays Jonas’ tough and demanding father who runs the gym where the MMA combatants prepare for battle. “From what I’ve heard now, they said that I was the best in the room and even though it was a difficult casting because they didn’t feel that I was necessarily the one that made the most sense, they knew it was the right call. I’m grateful they cast me,” he nods.

That was a tough time for the 24-year-old. His “band of brothers” had dissembled because of differences, and he felt adrift. “I was not so much scared,” he says, “I was really frustrated. At that point in my life, I was 21, and I was anxious to prove myself as an adult — anxious to be given a real shot. There had been other projects that I was desperate to be part of that fell apart because of my last name. That was a theme for about a year and a half. So I think I reached that wall where I was just tired of shut doors and thankfully this one stayed open.”

Jonas’ determination to become an entertainer began when he was a kid and was prompted by a playbill his parents had brought home from the musical “Les Miserables.” He was inspired to see children among the cast, and vowed he would be one of them someday.

“I kinda felt the goals were within me, always,” says Jonas who’s wearing a black suit and black T-shirt.

“I always had a real clear vision that I wanted to be in entertainment on some level. It started for me on Broadway which was the best place to grow as a young performer, and then transitioning naturally into recording music and touring. But it wasn’t something where I had to really sit down and write it and manifest it. For some people being a child actor is their worst regret, but for me it set me up into being an adult in this and to be a part of people’s lives from an early age and get them some familiarity,” he says.

“A lot of doors that were wide open. A lot of opportunities that were amazing — doing shows and working with great people, talented people — but when I was on Broadway I wanted to be in films. And there’s always more. Those were the obstacles. As time went on, it was always about the next thing and how to continue to grow. I think that’s still there, but I’ve learned to balance a little bit and to appreciate some of the victories.”

Jennifer Lopez, who got her start as one of the whirling “fly girls” on “In Living Color,” is returning to her first love as executive producer for the new show, “World of Dance,” airing this week on NBC.

The fierce competition engages dancers of all ages. And Lopez says, “I love dance at a core level, and I always consider myself a dancer kind of first, because I became a singer and an actress after I was a dancer,” she says.

“That was the first thing my mom put me in when I was 5 years old. That was my first form of artistic expression. And so, for me, it’s so part of who I am that to watch it now and to be able to see kids who are what? 9, 10, 11, 12 years old, and then to see people who have been doing it for so long and are a seasoned couple dancing together, it just reminded me of all of the reasons why I love dancing, why I wanted to do this in the first place … I guarantee you, within the first half hour of the show, you are going to laugh, you are going to cry, and you are going to dance.”

“Animal Kingdom” is back on TNT this week with Ellen Barkin as the manipulating and sensuous mother of all mothers to her four crime-inspired sons. Based on an Australian movie, the show is more than an examination of the dynamics in the group, says Barkin. “It’s not just a dysfunctional family. It to me is a family that’s using their skill sets to survive in a very dark and dangerous world, and so far they’re doing a pretty good job of it. They’re really succeeding, I think. And how that family works internally and in the external world is what fascinates me about it … I always like playing with the idea of twisted motherhood and the ways in which that can go.”

CARREY CAME OUT OF THE CLOSET

Jim Carrey is one of the producers for “I’m Dying Up Here,” Showtime’s examination of the comedy world of the ‘70s, when comics like him were climbing up through the ranks. “I, for a very long time, have wanted to do something about this era,” says Carrey. “I have the greatest respect and love and admiration for the people whose ministry it is to free the world from concern. And I think it’s really important to recognize it.

“And at that time, there was a beam that could catapult people to the stars, and that was ‘The Tonight Show.’ And we all came out and gathered around the heat of that and were hoping for the best. But I had so many incredible experiences. I’m lucky to be alive really, but I had so many unbelievable experiences and wonderful circumstances.”

Two of the comics in the show live in a closet. Carrey says he did that too. “I lived in a closet when I first came to L.A. I met somebody at the Improv who said they had a room, and it turned out to be a closet. So for the first year or so I was here, I lived in that closet. So that’s a really great thing for me. And I woke up the next morning the very first morning that I lived in the house to walk out in the kitchen and find a beautiful young girl making bacon with no pants on. And I went, ‘Wow.’”