Gal Gadot is a wonder in ‘Wonder Woman’ 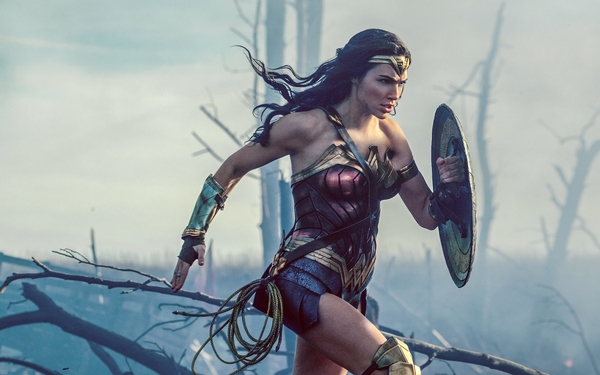 It’s taken 76 years for the comic book character Wonder Woman to lasso her way onto the big screen in her very own standalone film, and it’s not a moment too soon. “Wonder Woman” arrives in theaters under an intense amount of scrutiny. The first female-starring superhero film directed by a woman, Patty Jenkins, carries the burden of representing half the population, and her success could determine the fates of other female superhero films. Not only that, but after a string of superhero blockbusters that have been battered by critics, the DC Comics cinematic universe needs an acclaimed hit. So it’s a pleasure to report that “Wonder Woman” more than delivers on its promise. It is simply awesome.

The keys to its success lie in the two wonder women at the heart of the film, director Jenkins and star Gal Gadot. With her scene-stealing appearance in last year’s “Batman vs. Superman,” it was clear Gadot could ably fulfill the duties of the hero: smart, sassy, strong, and in need of no man’s aid. She remains just as headstrong and physically formidable, but in “Wonder Woman,” we get to know Diana better, and she’s one of the most charming and lovable superheroes to come around in a long, long time.

Jenkins and writer Allan Heinberg have sacked the dark and dour tone that began with the Christopher Nolan “Batman” trilogy, and has persisted through Zack Snyder’s Superman and Batman films. “Wonder Woman” engages with the heavy topics of war and the dark nature of mankind, with a story set during World War I, but the film is often lighthearted and funny, especially regarding Diana’s limited understanding of the modern world. Gadot plays off Chris Pine, who plays British intelligence spy Steve Trevor, beautifully. The two have a winning chemistry together, bringing a sense of ease and humor to their dramatic performances.

“Wonder Woman” isn’t perfect — there are a few wonky moments, especially some cartoonish early scenes of Diana growing up on the island of Themyscira, among the Amazon warrior women. The film doesn’t quite hit its groove until Gadot shows up. A final battle sequence falls victim to the dreaded CGI sludge, but Jenkins maintains a steady hand on the story and character, so that each emotional journey remains engaging throughout all the digital fire and brimstone.

The action sequences starring Gadot and the other Amazons are absolute stunners. Robin Wright turns in a memorably athletic performance as Antiope, and Jenkins shoots the powerful, breathtaking stunts with clarity and vigor, effectively using slow-motion and speed ramping techniques to create a breathtaking ballet of strength and grace. Witnessing such feminine power is mind-boggling and awe-inspiring, but wistful, too. It’s a shame that such instances are so rare to be exceptional.

“Wonder Woman” proves that Diana Prince, that wonder of a woman, is exactly the kind of superhero we need now, one we have been thirsting for. Unburdened by dark backstory and moral ambiguity, she’s optimistic, determined and driven to action by her stalwart belief that one should always fight for those who cannot fight for themselves. During times of fear, darkness and pain, the shining beacon that is Wonder Woman reminds us to fight for truth, love unabashedly and protect even those who might not deserve it. Thank goodness we have her.

Rated PG-13 for sequences of violence and action, and some suggestive content.