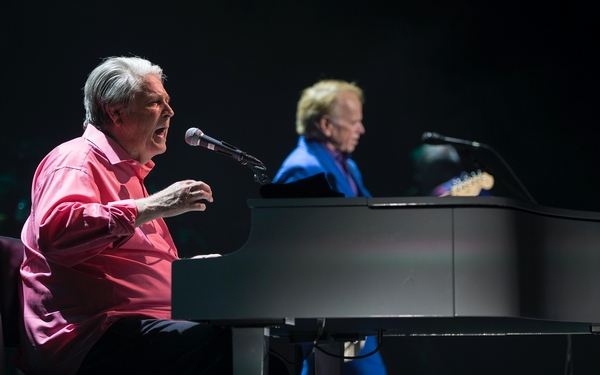 Beach Boys founding member and creative leader Brian Wilson spent the better part of 2016 on the road commemorating the 50th anniversary of the release of the group’s record “Pet Sounds,” one that consistently ranks at or near the top of fan and critic polls of greatest albums of all time.

So there’s little argument that if any album warrants the victory lap Wilson and his remarkable pop-rock orchestra are taking, “Pet Sounds” certainly qualifies.

Wilson and company pulled into the Pantages Theatre in Hollywood on Friday for the first of two nights on this sequel tour, scheduled to continue into mid-October; the grand finale of what’s billed as the final Pet Sounds Live tour Wilson will shepherd is scheduled for Oct. 14 in Costa Mesa.

The concert Friday was particularly meaningful, unfolding just a couple of hops, skips and jumps from the studios where Wilson, his bandmates and the crack studio pros later dubbed “the Wrecking Crew” assembled this pop masterpiece.

“Pet Sounds” opened the second half of a 21/2-hour show that was complemented with a sampling of Beach Boys hits and deep tracks, the latter helping keep the concert fresh both for the performers and fans who’ve presumably taken it in more than once since Wilson first presented the album in concert 15 years ago.

Coincidentally, this revisiting took place the same day as the release of a 50th-anniversary edition of an album it so crucially inspired in many ways, the Beatles’ “Sgt. Pepper’s Lonely Hearts Club Band.”

Fans love to debate which is the superior artistic achievement. But as in all things in the world of art, the either-or predicament is unnecessary. Both are deservedly lauded for different innovations they brought to pop music in the mid-’60s.

Much of the emotional power of “Pet Sounds” derives from lyricist Tony Asher’s processing of Wilson’s continuing artistic, personal and psychological maturation. Wilson was a mere 23 when he set about working on “Pet Sounds,” an album filled with songs about growing up, new responsibilities and the shifting dynamics of romantic and other personal relationships.

Does it dispel the disarming charm of the album’s opening track, “Wouldn’t It Be Nice,” to hear the line “We could be married/ Then we could be happy” sung by a 74-year-old man who has been married twice — in his current marriage for 22 years — and is father to seven children? Not a bit.

Likewise, it’s the quest of a young adult still sorting out his own identity from someone he’s wronged that is at the heart of “That’s Not Me.” The winsome youthfulness we heard in Wilson’s voice in 1966 is long gone, but the song’s gently sculpted melody, surprising chord progressions, signature Beach Boys harmonies and inspired choices from among the vast array of instruments Wilson brought into the mix remain stirring.

Wilson did manage to compromise the beauty of a couple of his “Pet Sounds” songs by experimenting with his own phrasing in a way that diminshed the fluidity he’d originally built into “Don’t Talk (Put Your Head on My Shoulder)” and “Caroline, No.”

That may be his way of keeping the songs fresh for himself, but unlike Bob Dylan’s radical revisioning of many of his pop classics, so much of the appeal of Wilson’s music is in the extraordinarily beautiful melodies he crafted, and when anyone starts tinkering with those, they can suffer.

So much of the joy of these live settings of Wilson’s music centers on the skill and dedication of the 10 members of his touring band, which this time around again has included fellow Beach Boys founding member Al Jardine and ‘70s-era Beach Boy, guitarist, singer and songwriter Blondie Chaplin.

It’s still a rarity to experience vocal harmonies that can run eight, nine or 10 voices deep, as they frequently did Friday. Beyond that, Wilson and his compatriots celebrate just how broad and rich the palette for pop music can be by supplementing the core of guitars, keyboards, bass and drums with clarinet, tenor and baritone saxophones, trumpet, trombone, French horn, standard and bass harmonicas on down to the tuned bicycle horn used on “You Still Believe in Me.”

Among the deep tracks are “Wake the World,” “Salt Lake City” and “Feel Flows,” the latter a Carl Wilson lead vocal that was delegated to Chaplin, who handled it ably. Keyboardist Darian Sahanaja was given Carl’s song “Darlin’” and honorably served the memory of the younger Wilson sibling’s effortless vocal style.

Brian Wilson’s own voice was assertive and confident throughout the show, and over time since his return to concert stages in 1999, he has succeeded in extending his range, tone and control — all of which had been severely damaged during his well-documented battles with mental illness, physical fitness and personal demons for much of his adult life.

He was in a chipper mood, appearing delighted to be back in front of a hometown crowd.

If some of the early going in the first half of the set devoted to Beach Boys hits such as “California Girls,” “Dance, Dance, Dance,” “I Get Around” and “Help Me, Rhonda” felt a bit mechanical, the band locked in as the set unfolded and sprang to life with a pair of Wilson’s earliest and most introspective compositions, “In My Room” and “Surfer Girl.”

After “Pet Sounds,” the evening wrapped with another generous handful of Beach Boys hits, including the still-genius single “Good Vibrations” and such festive fare as “Do You Wanna Dance?,” “Surfin’ U.S.A.” and “Fun, Fun, Fun.” (Count this critic among the minority who has never fathomed the appeal of the Beach Boys arrangement of “Barbara Ann” and would happily vote for its retirement from Wilson’s set list.)

Closing the show as he characteristically has, Wilson served up the only number he played all evening from his solo repertoire, “Love and Mercy.”

The 1988 song sounded as timely as ever after last week’s bombing at an Ariana Grande concert in England, when Wilson sang, “I was lying in my room/ And the news came on TV./ A lotta people out there hurtin’/ And it really scares me.”

Wilson’s oft-stated wish for his music is that it would bring more harmony and love into the world, and his song explicitly asking for “love and mercy” provided a suitably healing musical benediction.