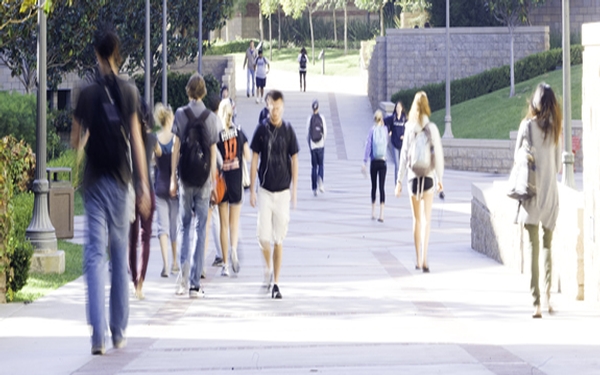 Students walking to and from classes at UC Santa Cruz

The University of California will no longer pay for its governing board members to throw themselves dinners and parties after a Chronicle report showed that the regents regularly billed the university for their festivities.

Although the events were charged to a private endowment, and thus not covered by public money or tuition, the practice will stop “to avoid any question over use of university or university-associated funds,” Board of Regents Chair Monica Lozano and UC President Janet Napolitano said in a statement Sunday.

Longtime Regent Richard Blum, a wealthy financier and former chairman of the board, said the policy change was his idea. After reading The Chronicle’s story Sunday, Blum said he called Napolitano and suggested it.

The change in policy came hours after The Chronicle reported that the UC governing board billed the university for nearly a quarter of a million dollars since 2012 for dinners every two to three months.

Some of the banquets were poorly timed: The $270-a-head Jan. 25 banquet was held the night before the regents voted to raise student tuition. And the similarly priced May 17 party happened a few hours after student protesters shut down the regents’ meeting, objecting to both the tuition increase and a $175 million secret fund uncovered by a state audit this year.

The dinners were thrown at luxury destinations, such as San Francisco’s InterContinental Hotel and Palace Hotel. Attendees included the regents, their spouses, UC executives and campus chancellors.

“Up to now, board dinners have been paid for with monies from the Searles Fund, a private endowment that the donor designated for university business costs not covered by state or tuition funds,” read the statement from Lozano and Napolitano. “However, to avoid any question over use of university or university-associated funds, regents will absorb their costs for board dinners from this point forward.”

Revelations of the dinners came as the UC weathered blowback from the scathing audit — including calls by legislators to strip the university system of its independence from state government and Gov. Jerry Brown’s withholding of $50 million in funding if the university system didn’t fix financial problems identified by the review.

Considering that the UC — with its 10 campuses, five hospitals and three national laboratories — has a budget around $30 billion, “it’s kind of silly” to be concerned with the price of dinners, Blum said. “But having said that, there’s the perception problem.”

What’s more, Blum said, paying $250 or more per person — even for fine dining — was “crazy.” By comparison, periodic dinners at the Ritz-Carlton he has hosted for the American Himalayan Foundation, of which he is chairman, cost only $90, he said.

Blum said he asked Napolitano to go through the numbers with him first thing Tuesday morning. He said he wasn’t sure whether the new plan would include the Wednesday night dinners the regents have when they gather every other month for the board meetings or whether it would only cover their celebratory dinners.

A university spokeswoman did not return requests for comment Monday.

Those who criticized the spending said they were pleased with the new policy but questioned why it took a newspaper report to make the change.

“It’s appropriate, if for no other reason than the symbolism,” said Lt. Gov. Gavin Newsom, a regent who did not attend the two most recent parties. “Spending tens of thousands of dollars on dinners is absurd. It rubs people, understandably, the wrong way.”

Some observers, including Jamie Court, president of the advocacy group Consumer Watchdog, and Assemblywoman Catharine Baker, R-San Ramon, said the regents should reimburse UC for their past expenditures.

Jessica Levinson, a law professor and government ethics expert at Loyola Law School, said invoicing the dinners to UC was “distasteful” and “tone deaf,” but at least university officials were swiftly responsive to public pressure.

“We’re talking about money that could be used to educate kids,” Levinson said. “If they wanted to have reasonable business dinners, maybe that’s a different story, but that doesn’t appear to be what happened.”

To see all of The Chronicle’s reporting about the controversial University of California audit: www.sfchronicle.com/uc_audit