Smithsonian Channel brings to life the story of the U.S. as never seen before in "America in Color" 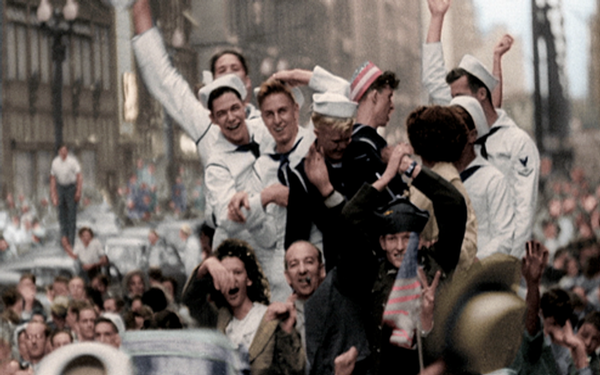 From Prohibition and the Jazz Age to the moon landing and the birth of rock and roll, many of the greatest, most significant events of the 20th century have only been experienced in the black and white footage available at the time. AMERICA IN COLOR, a new five-part series from Smithsonian Channel, presents many of these iconic moments in U.S. history as never before seen – using artistry and cutting-edge technology to transform black-and-white films and photographs from the 1920s to the 1960s. Decade by decade, the story of America, its people and its culture are given new life and shown in vibrant color for the first time.AMERICA IN COLOR premieres on Smithsonian Channel on Sunday, July 2 at 8 p.m. ET/PT.

The expansive series takes viewers on a visually stunning journey through American history – including fascinating footage of illegal drinking in speakeasies during the 1920s, rare home movies of President Franklin D. Roosevelt during the Great Depression, scenes of the surprise attack on Pearl Harbor, Elvis Presley’s television debut on the Ed Sullivan Show, and the Nixon-Kennedy debate. Using revolutionary methods in footage restoration and colorization, AMERICA IN COLOR accurately restores and colorizes archival black-and-white visuals from the early part of the 20th century up through the ‘60’s. Filmmakers meticulously researched original colors to confirm the correct tones from each era and used source materials from obscure archives and forgotten family vaults.

“History was not lived in black and white. It was lived in color,” said David Royle, Executive Vice President of Programming and Production, Smithsonian Channel.  “AMERICA IN COLOR is a groundbreaking series that transforms a past that seemed gray and distant into a cinematic experience. We believe it is the most ambitious colorizing of factual images ever undertaken on American television, and it enables us to see America in a new light – through which iconic moments in 20th-century history become more compelling and tangible than ever.”

The filmmakers spent almost 6,000 hours painstakingly scouring obscure archives, dusting off forgotten family vaults, and tracking down private collectors to find the 27 miles of film they needed – much of it not seen for nearly a century.  The black and white footage was then painstakingly colored by an expert team in France.

The series premiere, AMERICA IN COLOR: 1920s, tells the story of an America that undergoes its greatest period of change and unprecedented growth. Extremely rare footage of the 1920 Wall Street bombing, the worst terrorist attack in U.S. history up to that time, and the Greenwood massacre – one of the bloodiest racial massacres in American history – is shown for the first time. The filmmakers discovered footage of Henry Ford’s Model T, and the first successful solo cross-Atlantic airplane flight by Charles Lindbergh, which catapults him into the international spotlight. Home movie footage captures illegal drinking in speakeasies and bootlegging, the unintended consequences of Prohibition.  The decade also sees women securing the right to vote, the birth of the Flapper, the resurgence of the KKK, the growth of radio, Babe Ruth and boxer Jack Dempsey, and the rise of signature skyscrapers like the Chrysler Building and the Empire State Building.  In 1929, the Wall Street Crash devastates the economy, putting an end to a decade of revelry.

Subsequent episodes of AMERICA IN COLOR include:

The 1930s begin after the greatest economic shock in history. The Great Depression dominates the decade: banks fail, businesses go bust, and 12 million Americans look for jobs. In 1932, Franklin Roosevelt wins the Presidency by a landslide with the promise of a New Deal, and, after a failed assassination attempt, sets about rescuing the economy. Never-before broadcast footage of the interior of the Oval Office after the White House fire of 1930, home movies filmed by Lou Hoover, President Herbert Hoover’s wife, and images of FDR walking into a baseball game, are among some of the rare reels unearthed for this episode.  Recently uncovered footage of pilot Amelia Earhart, who disappears during an attempt to circumnavigate the globe, shows her preparing for takeoff. Viewers also get a rare chance to see behind-the-scenes film of the making of The Wizard of Oz, the first mainstream movie shot in color.

The 1940s – the decade that transforms America from an isolationist nation into the leader of the free world. Extremely rare footage captures Charles Lindbergh’s America First speeches as World War II rages in Europe. AMERICA IN COLOR depicts the Japanese attack on Pearl Harbor, filmed by Fox Movietone cameraman Al Brick, in color for the first time ever. As America enters the war, stars Carole Lombard, Bing Crosby, Clark Gable, and James Cagney are shown rallying to the cause. Home movie footage of Japanese Americans interned in remote camps is also revealed.  Post-war, citizens experience a new era of consumerism and witness the birth of suburbia.  Home movies (sourced from private collectors) show Las Vegas transforming into a top vacation destination, with legalized gambling and quickie weddings and divorces.

Racial unrest divides the nation, Russia has a nuclear bomb, and the Cold War throws a long shadow.  In dramatic televised hearings, Wisconsin Senator Joseph McCarthy accuses the government, universities, Hollywood and the Army of harboring communists.  In the South, extremely rare footage takes viewers to the trial of the brutal murder of 14-year-old black Chicagoan Emmett Till, whose murderers are acquitted by an all-white jury. One hundred days later, Rosa Parks refuses to give up her seat on a bus to a white man, for which she is arrested and fined. In Alabama, Governor Orval Faubus closes schools rather than enroll the Little Rock Nine, a group of African-American students.  Additional footage seen for the first time in color includes Elvis Presley’s debut on the Ed Sullivan Show, disc jockey Alan Freed in the movie Rock, Rock, Rock, and an early broadcast of dances made by a local television station.

Rare archival films, iconic news footage and home movies reveal the 1960s as a decade of revolution that brought forth modern America. Seventy million viewers watch Kennedy and Nixon in the first televised Presidential debate.  Seldom-seen stills of a fire-bombed bus in Alabama illustrate the violent resistance that met “Freedom Riders,” while recently restored footage shows Governor George Wallace vowing “segregation forever.”  The episode also features recently discovered footage of Martin Luther King, Jr. delivering a speech at Stanford University, and Walter Cronkite’s live TV announcement of the assassination of President Kennedy, presented in color for the first time. Home movies of the Woodstock Festival depict the counter-culture, which embraced peace, love and protests against the Vietnam War - – many of which have never been seen.

To learn more, go to www.smithsonianchannel.com.