If Sanders runs for president, can anyone stop him? 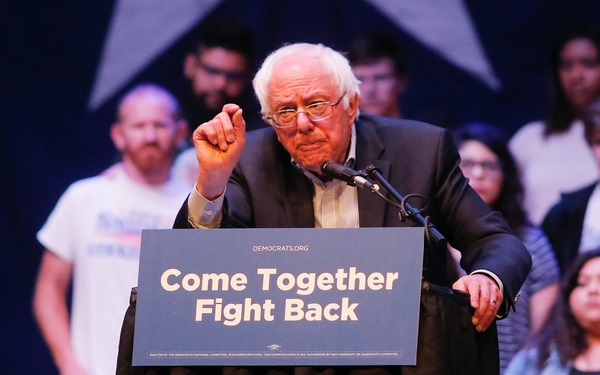 Senator Bernie Sanders speaks at the "Come Together and Fight Back" Democratic Party rally at Verizon Center on April 20, 2017 in Grand Prairie, Texas. (Rodger Mallison/Fort Worth Star-Telegram/TNS)

Bernie Sanders stands today as the country’s most popular politician. Once-skeptical Democrats are rushing head-long to embrace his proudly liberal agenda. Candidates are eager to tap into his network of donors and door-knockers.

To die-hard “Berniecrats,” that’s more than just an impressive resume — it’s proof that Sanders is the Democratic Party’s presidential front-runner in 2020.

Early assessments of the Democratic field usually dismiss Sanders, focusing instead on younger up-and-comers such as Sens. Kamala Harris of California or Cory Booker of New Jersey.

But a weekend gathering of several thousand liberal activists served as a reminder that if the independent senator from Vermont runs, he’ll be a formidable contender — one powered by the party’s ascendant progressive class, which thinks a demoralized Democratic Party has nowhere else to turn after choosing and losing with the more centrist Hillary Clinton.

“He’s so clearly ahead,” she said, predicting he would “sail” to the nomination if he got into the race. “He has the most comprehensive program. He’s been doing this his whole life. What people want is what Bernie is saying.”

National Nurses United helped organize the People’s Summit in Chicago, a conference of 4,000 progressive leaders that at times felt as much like a celebration of Sanders himself and his work to push the Democratic Party leftward.

There was also an ever-present sense that Sanders’ drive to the White House was not over. One popular shirt at the conference featured a picture of Sanders’s face with the words “Hindsight is 2020” below. During Friday’s program, a member of National Nurses United ticked off a list of progressive goals that included electing Sanders for president, a statement that drew uproarious applause.

When Sanders himself delivered a speech Saturday, members of the audience shouted at him to consider another run.

Sanders didn’t share his plans on stage. In the past, he has said that he has not made up his mind about 2020.

But like his supporters, members of his old campaign say Sanders deserves more respect from the oddsmakers — Democratic and Republican alike — than he is getting.

“Why isn’t he considered the front-runner?” asked Mark Longabaugh, a senior adviser to Sanders’ 2016 presidential campaign. “The political establishment, in the media and the Democratic Party, remain as out of touch with the electorate as they were in 2015 and 2016.”

Longabaugh checked off a list of reasons Sanders would be formidable, including a small-dollar fundraising base that raised hundreds of millions of dollars in 2016 and political organization that still exists in all 50 states.

“He also starts with a compelling and focused message,” the adviser said. “No other potential candidate starts with those assets.”

Sanders’ greatest impediment to another campaign — and why people usually don’t mention him as a top-tier contender — is his age: He would be 79 by the time he assumed the presidency. Even many of his supporters at this conference volunteered during interviews that they didn’t know if he would run again because of his age.

But they also point out that Trump is 70. And even if Sanders hasn’t said if he’ll run for president, he’s remained conspicuously active inside the Democratic Party, campaigning last month for Democratic House candidate Rob Quist in Montana.

Jane Sanders, the senator’s wife, said in an interview that it’s too early to decide about 2020.

But she added that her husband didn’t “disappear” after the last election.

Polls suggest Sanders, who won 45 percent of the vote in last year’s primary, would be a strong 2020 candidate. A Harvard-Harris poll from April found that 57 percent of registered voters viewed him favorably, while 32 percent viewed him unfavorably. Nobody else in the survey, including Sen. Elizabeth Warren of Massachusetts, tested higher.

A Harvard-Harris poll from March also showed him receiving the most support of any Democratic candidate in a hypothetical primary, though he drew only 14 percent support. Forty-five percent of respondents said they wanted someone new.

The party is likely going to have plenty of new candidates to choose from in 2020: In addition to Harris and Booker, Sen. Elizabeth Warren of Massachusetts, Sens. Kirsten Gillibrand of New York and Sen. Amy Klobuchar of Minnesota are frequently mentioned along with Los Angeles Mayor Eric Garcetti.

None of them are real contenders in the eyes of people at the liberal gathering in Chicago this weekend. In interviews, Sanders’ supporters say they continue to think he was cheated out the nomination because of meddling from the Democratic National Committee.

They’re also convinced that if Sanders had won the nomination, he would have defeated Trump.

“When they sent Bernie to the sidelines, that’s when all the air went out of the grass-roots movement,” said Quist, the Montana candidate who attended the summit. “It was pivotal.”

The Sanders supporters all said they would back him in another presidential campaign.

“The man appears, and I just start crying,” said Hillary Keyes, a 57-year-old resident of Boca Raton, Fla. “He connects with me on a level I’ve never experienced, in my heart and gut. It just resonates.”