After 50 years, an encore of the Monterey Pop Festival 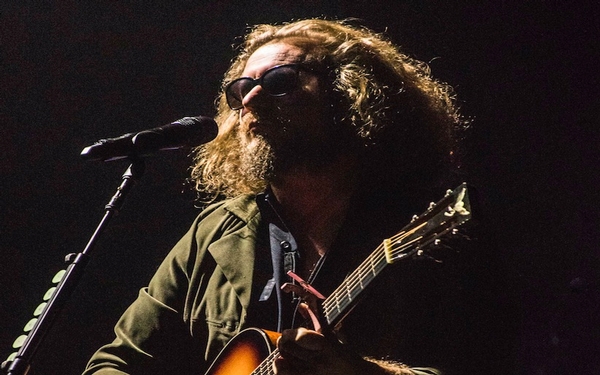 Jim James of the group My Morning Jacket performs on Oct 27, 2016 at The Thomas Wolfe Auditorium in Asheville, N.C. (David Simchock/Zuma Press/TNS)

In 1967 the Monterey Pop Festival served as a launchpad for such luminaries as Jimi Hendrix, the Who, Janis Joplin and the Grateful Dead. It also helped bring soul singer Otis Redding in front of a new audience and introduced master Indian classical musician Ravi Shankar to American ears.

Monterey Pop did all of this three decades before the Coachella Valley Music & Arts Festival was born, and even a couple of years in front of Woodstock’s historic “three days of peace and music” in upstate New York back in 1969.

Monterey Pop, a modest event in Northern California, paved the way for all of them and helped define the modern festival.

“To this day, that lineup for Monterey in ‘67, you can’t touch it,” said Paul Tollett, head of concert promoter Goldenvoice, the creator of Coachella, its country cousin Stagecoach and last fall’s rock superstar blowout, Desert Trip.

Recently, Tollett and veteran record executive, producer and promoter Lou Adler, a key figure behind the original Monterey festival, sat side-by-side on a couch in the living room of a Malibu house, which Adler uses as an office.

“You have to have a filter (for selecting which acts to book), and the filter for Monterey was one of the tightest in music festival history,” Tollett said. “Pretty much everything on that show was great.”

Goldenvoice and San Francisco-based Another Planet Entertainment have teamed with Adler to stage next weekend’s three-day Monterey Pop 50th anniversary festival at the same site that hosted the original in 1967, during the so-called Summer of Love.

In honoring the anniversary, Adler said, “We’re not trying to replicate Monterey Pop, which you can’t do. It’s more of a celebration.”

Among the headliners are former Grateful Dead member Phil Lesh and his Terrapin Family Band, pop-jazz chanteuse Norah Jones (Shankar’s daughter), Eric Burdon & the Animals, which also played 50 years ago, and soul music musician, songwriter and producer Booker T. Jones, who is bringing his Stax Revue in recognition of his role at the 1967 version backing Redding.

“I think the closest to Monterey is how eclectic the (current) lineup is,” Adler said. “Now festivals often have four or five stages. When we did Monterey the first time, we had one stage, like we do now. All 32 acts appear on that stage.”

Adler, along with Mamas & the Papas’ member John Phillips and rock music fan and entrepreneur Alan Pariser, help dream up the modern festival template five decades ago. Pariser, having gone to the Monterey Jazz Festival, wanted to do the same for pop.

“He came to us because he wanted to hire the Mamas & the Papas to close the show,” said Adler, who was the group’s manager.

“When we realized it was at the same site where the jazz festival was held, we thought, ‘This is a way to validate rock ‘n’ roll.’ By about 3 a.m. the next morning, John had said we should do it, it should be three days, we should get groups from all over the world, and we should do it as a charitable event to give something back, because we’d all been starting to make a lot of money at that point.”

At the 1967 festival, the lineup spanned the sweet folk-rock of Simon & Garfunkel and the Mamas & the Papas, the scorching R&B of Redding, the fiery blues-rock of Joplin and her San Francisco-based band Big Brother & the Holding Company, the blue-eyed soul of Johnny Rivers and the exotic ragas of Shankar.

That’s one reason the event’s creators dubbed it a “pop” rather than “rock” festival.

“We wanted it to include all types of music,” said Adler, who at 83 is still the picture of Southern California hip in a gray porkpie hat, royal-blue blazer over a white tropical T-shirt, white ankle-length pants, dark shades and blue-and-white running shoes that could have been designed by Jackson Pollock. “We never thought about calling it a ‘rock’ festival.”

Music mogul Clive Davis was still an executive on the rise at Columbia Records when he decided to check out the Monterey festival.

“There was no question that … there was a change in contemporary music,” Davis says in author Harvey Kubernik’s new book “1967: A Complete Rock Music History of the Summer of Love.”

Davis added that it was a “definite hardening, edgier, rockier amplification that was taking place that truly was signaling a major revolution in rock music.”

One aspect of the original Monterey festival often overlooked is its status as the first major rock-centric benefit concert.

All the performers — except Shankar, who had been booked before the event became a benefit — donated their services; proceeds from ticket sales went to a nonprofit foundation that still exists, and which also will get some of the proceeds from this year’s show.

The foundation supports the Painted Turtle arts camp near Lake Hughes that serves youths with various disabilities and life-threatening illnesses, and it is one of the main activities to which Adler and his wife, actress Page Hannah, devote themselves these days.

Monterey Pop became one of the defining pop culture moments of that summer 50 years ago, unfolding as it did with input from a number of pop dignitaries.

It was McCartney and Oldham who urged organizers to book Hendrix and the Who. McCartney and John Lennon also offered up a rare visual art collaboration to help promote the festival: Their hand-drawn poster for the festival program, signed by all four Beatles, sold in 2015 to a collector for $175,000.

The gathering in Monterey ultimately served as a bridge between San Francisco/Berkeley groups that emerged out of the region’s blossoming hippie culture — the Dead, Jefferson Airplane, Country Joe & the Fish, the Steve Miller Band, Quicksilver Messenger Service and Moby Grape — and the fertile L.A./Hollywood music scene that produced the Byrds, Buffalo Springfield, the Mamas & the Papas, Canned Heat and Johnny Rivers.

But Monterey Pop remains best remembered for breakout performances by Hendrix, Joplin, the Who and Redding — in large part because Adler and his partners were savvy enough to hire filmmaker D.A. Pennebaker and his crew to document it.

Not coincidentally, a new 4K restoration will screen in L.A. on June 19 and 20 at the Cinefamily theater. It’s also set to be shown Wednesday in New York and in selected theaters around the country starting Friday.

In the film, Mamas & Papas’ singer Cass Elliot, the Monkees’ Micky Dolenz and other famous faces can be seen in the crowd cheering alongside rank-and-file concert-goers.

Tollett noted the absence at Monterey in 1967 of barriers that now typically keep fans a safe distance away from festival concert stages. That divide between artists and fans — both physical and psychological — largely didn’t exist at Monterey.

Monterey also brought with it some modern creature comforts.

“A lot of the problems that we ran into on the road, we tried to address at Monterey,” he said. “Even the food: when you were on the road in those days at 1 o’clock on in the morning the only thing you could eat was a White Castle burger. So we had 24-hour food service. We built a cafe below the stage.

“Bringing that up another level, we had steak and lobster and almost anything they wanted, 24 hours a day,” he said.

“I think a lot of what happened to artist relations in the music would after that came out of those conversations,” Adler said. “Artists would tell us what to do, they’d talk about what they wanted to do. A lot of stuff changed after Monterey.”

“So many things were breaking at that time,” Tollett said. “Obviously it was a different world back then.”

“There’ll never be another lineup like that again,” Tollett said.

Quipped Adler, “You couldn’t afford it!” prompting Tollett to add, “Well, there’s that too.”