New PBS series aims to tell ‘The Story of China’ 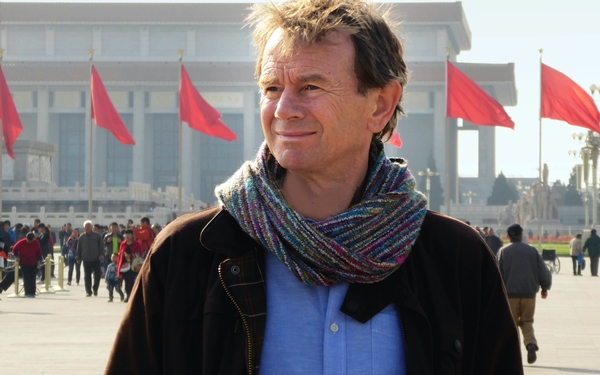 Michael Wood walks through Tiananmen Square in his six-hour series, "The Story of China," premiereing on PBS June 20. (PBS)

Historian and filmmaker Michael Wood, who’s produced several series on PBS, has no idea where he acquired his interest in history.

“I was a kid in the 1950s and the Second World War seemed like a long time ago but it was very, very close. As I look back on it now, I realize my mum was caught in the blitz in Manchester. My dad was in a naval hospital on D-Day … my Uncle Bill was at Dunkirk and the march to Berlin and D-Day. My Uncle Sid’s ship was torpedoed and sunk in the Mediterranean. And when you’re a little kid you hear stories of your parents and grandparents talking – because history’s storytelling in the end – so I maybe trace it back to family first. Then great teachers.”

The British Wood, whose series have illuminated the Dark Ages, retraced the steps of Alexander the Great and reconnoitered the Trojan War, is approaching his biggest challenge yet. On June 20 his six-hour series, “The Story of China,” will try to decipher the world’s oldest continuous state on PBS. (Check local listings.)

China, he says, is a dynamic and modern nation that still clings to its ancient past. “They want the party still to be in charge,” he says. “They want growth still to continue because that will keep the people happy. But they also are making a huge emphasis on the greatness and distinctiveness of Chinese culture.

“The latest best-selling version of Confucius, that moral text from the 5th century BC, has got a wraparound from President Xi Jinping saying, ‘Read this book.’ I mean, Chairman Mao’s Red Guards dug his grave up and condemned him. So, you know, these are interesting times.”

It took three years to film the series. And while at first the filmmakers were accompanied by a representative of the Chinese authorities, once their objective was understood they were left to their own devices, says Wood.

“The only place they supervise is Tiananmen Square, and that’s the only place where they ask you what you’re going to say, for obvious reasons. But they trusted us in the end … I had filmed in China several times with PBS. We did the ‘Legacy’ series back 25 years ago, and it’s easy to think China isn’t changing, but it’s changing all the time,” he says.

“And the ease with which it was possible to make these films and the access that you got was really great … We had no government supervisor with us on the last few shoots, and we’d asked for quite a few what might have been awkward things, but they were fairly kind of cool about that.”

Rebecca Dobbs, producer on the show, says China is a complicated mix of modern communication and ancient myths. “There’s an awful lot of kids filming on a phone what’s happening,” she says.

“There’s a big difference between what’s happening in Shanghai and Beijing, and you go out to Guaping or somewhere (less populated), and you’ve gone from the future to the past in a six-hour train journey,” she says. “It is quite extraordinary that you’re there in a country which is right on that cusp and is soooo big, but it can accommodate both of those things in one country.”

The whole point of the project, says Wood, is to understand the real China, not the one that many assume exists. “When you look at China today, it’s really important to understand things such as the way the Chinese see their civilization, as heirs to a great civilization,” he says.

“They’ve gone through these traumas of the 20th century with the Second World War, in which the biggest casualties in the Pacific were Chinese. And they were our allies. They suffered the Japanese invasion. It (the war) began earlier for them. They went through the revolution. They went through famine. They went through all these things. Now they’ve emerged as a superpower and an economic power. They are rediscovering the greatness of their civilization. And it’s a civilization that has immense resources.”

Lik Hang Tsui, a contributor to the series and an authority on the history of the Song Dynasty, agrees that China’s past is as invasive as its present. “I think understanding China’s past, especially not just its recent past, but the whole span of it, helps us understand how the Chinese always draw history for its contemporary political, economic, diplomatic scene. When it builds its version of modernity, it tries to retain the Chinese identity in it. So it really is a living tradition.”

Dobbs responded, “‘Well, we’re doing history.’ And I had in my rucksack a map of the Old City, and I pulled it out and showed him, and immediately the mood changed. It was like, ‘Oh, fantastic! You’re doing history! Right! Well, around here is a temple. Around here is something else you might want to see.’ It was fantastic.”

Wood thinks that China remains inscrutable to most of us. “We think we know China, don’t we? But as the Chinese always say to us, ‘Oh, you Westerners have a certain image of China. It’s mad growth and development and high rise and the one-party state and authoritarian. That’s your vision of China.’ But actually, it’s so incredibly diverse.

“You go to the lake in Beijing and notice all these young Chinese Joni Mitchells and Neil Youngs doing their protest songs and then you slip around the corner to the Starbucks and then go and see a Hollywood movie. There everything is possible.”

GET YOUR KICKS ON THE TRAVEL CHANNEL

For some odd reason people love to be scared to death. And the Travel Channel is filming some of the extreme positions in which people place themselves just to get a high. Called “Xtreme Screams,” the show will take viewers from Thailand to Texas, from the 721-foot-high leap off Verzasca Dam in Switzerland to the 100-mph thrill ride in Manitou Springs, Colo. But you’ll have to wait until October to enjoy those vicarious thrills when the eight half-hour installments premiere.

McCORMACK LOCKED AND ‘LOADED’ FOR PREMIERE

Mary McCormack (“In Plain Sight”) is back among them in AMC’s new series, “Loaded,” set to premiere July 14. The series involves four techies who sell their gaming company and become overnight ka-billionaires. How they cope with that new-found largesse is the theme of the show, which is based on a U.K. version.

McCormack says she owes buckets to her parents for not discouraging her idea to become an actress. “I borrowed every dime of my college education. My parents didn’t have it, and when I said I wanted to be an actor they said, ‘Of course, do whatever makes you happy.’ Now as an adult who pays her own mortgage and has her own children, I think, ‘My God, for them to say that. I bet they went into their room, shut the door, and passed out.’ It was courageous and nice and kind of them to say it.”

‘BROADCHURCH’ BACK WITH NEW MYSTERY

The third and final season of BBC America’s “Broadchurch” arrives on June 28. Once again Chris Chibnall has devised a new crime that involves the entire community and keeps viewers ricocheting from one suspect to the other.

It stars the brilliant Olivia Colman as half of the police team investigating the crime and David Tennant as her volatile partner. Filmed along the Dorset coast in England’s southwest, the protruding sheer-faced cliffs become a character in themselves and played a pivotal role in the show’s first season. The identity of the killer in the first season was such a secret that even the cast didn’t know who did it. They put sticky notes on the board with their pick for the guilty party. Few of them guessed correctly. The same applies to the mystery of Season 3.