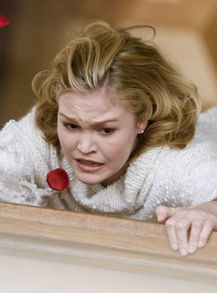 Julia Stiles may not be the first actress that comes to mind when you think of casting the mother for a creepy remake of the 1976 hit classic The Omen . Even Stiles herself was more than surprised to learn that she was the only actress director John Moore ever thought of hiring. Or maybe she was just scared.

“Actually, I was terrified,” the actress recalls. “The idea of The Omen really frightened me. But I knew there was something in John's vision for the film and character that I could really sink my teeth into.”

That character, Katherine Thorn (mother of Damien), proved to be a challenge for Moore. Of all the characters in the film, Katherine needed the most updating. “We couldn't translate the Katherine character from the original because she was not really that layered,” says producer Glenn Williamson.

Moore explains, “Social, personal and political perspectives on motherhood have changed a lot in the past 30 years. In our story, Katherine struggles with the fact that she's a young woman, a stay-at-home mother, living in a foreign country where she doesn't have many friends. Her personal conflict is agitated as Damien's true nature is revealed.”

The film focuses on the arrival of the anti-Christ into the world. A boy is born to a mother who dies during childbirth while, at the same time, Stiles' character gives birth to a stillborn. Katherine's husband, Robert Thorn (Liev Schreiber), is convinced by a hospital priest to take the motherless child and raise it as his own.

The priest and Robert agree to tell Katherine, who has suffered two previous miscarriages, that the orphaned baby is her own, and they both conclude that she will never need to know that her natural child did not survive.

Robert and Katherine embrace the child they name Damien. As he gets older, though, disturbing events begin to swirl around him. The troubling incidents can only mean that something is terribly wrong with Damien.

Stiles studied the transformation she saw her character going through, “Katherine begins to feel a kind of detachment from Damien, which she and Robert cannot understand,” she says.

“Over time, she realizes there's some validity to her fear of her son. Adding to her escalating troubles is the feeling that nobody's listening to her,” explains Stiles. “She turns her anxiety inwards. It eats away at her until she eventually breaks down.”

The film also stars Mia Farrow as Mrs. Baylock, Damien's new nanny who seems to have an unnatural devotion to the child. Farrow being cast as the evil nanny comes as no surprise to most. Her infamous role as the innocent mother of a satanic child in Rosemary's Baby has strongly validated her presence in horror films. The coincidence is that she was working on a play with Stiles when she got the call from Moore asking her to be part of The Omen .

“It was funny,” Farrow says, “I was rehearsing a play with Julia Stiles in which I play her devoted mother. Julia and I completed our runs in the play on a Sunday night, and a week later, I'm, as Mrs. Baylock, making things very difficult for her on the set of The Omen .”

Although the latest technology was employed in the re-creation of the classic, some shots required the camera to be so close to Stiles that she actually had to perform her own stunts.

In the scene that finds Katherine hanging onto the second story banister, Stiles took on the deep plunge herself. “The rig was created so the camera was mounted just over Julia, with the apparatus repelling as she's falling,” explains Williamson. “It's almost like a demon chasing her down.”

Stiles' pivotal scene is almost angelic as it showcases her golden hair and porcelain skin draped in white while contrasting blood red rose petals flutter all around her.

“I was inspired by the imagery of Gabriel and the fallen angel,” Moore explains. “[Costume designer] George Little and I gave Katherine a shawl, which as she falls, makes it look like she has wings.”

Stiles' first reaction to hearing she would be performing the stunt was simply, “OK, bring it on.”

Her hubris was soon quashed by the reality of the risks involved. “I woke up in a panic in the middle of the shooting, thinking, ‘Oh, my God, they scheduled the stunt for my last day of shooting; what are they trying to pull?'” laughs Stiles. “Then I panicked.”

Her understandable fears were put to rest after being shown how the stunt rigging worked and receiving the news that the scene was to be shot at an earlier date.

Towards the end of shooting the stunt (three long days of being in a harness), Stiles once again began to worry. “They had me hanging above the floor for quite a while. There was a safety lock on the rig, and two stunt guys were holding me up for three days,” says Stiles. “I could feel the tension of the rope, and them straining a little bit. I looked down and thought, ‘What if the stunt people get really tired? Or they have a muscle spasm?' In the end, everything turned out fine of course.”

Stiles' impressive career history has earned her countless critical accolades and reserved her parts in some seriously successful and highly acclaimed films.

The young thespian first graced audiences with her presence as defiant Kat in Ten Things I Hate About You and continued on to star alongside acting big-wigs such as William H. Macy ( Edmond ), Forest Whitaker ( Little Trip to Heaven ), Matt Damon ( The Bourne Supremacy ), Julia Roberts (Mona Lisa Smile ) and Sarah Jessica Parker ( State & Main ), just to name a few.

Beginning her career on the New York stage, Stiles goes back from time to time to tackle productions, including a recent appearance in Eve Ensler's “The Vagina Monologues.”

The young actress is full of promise and we can't wait to see her deliver on even bigger projects in the future; preferably something where we won't have to cover our eyes in fear.

The Omen releases in theaters June 6.