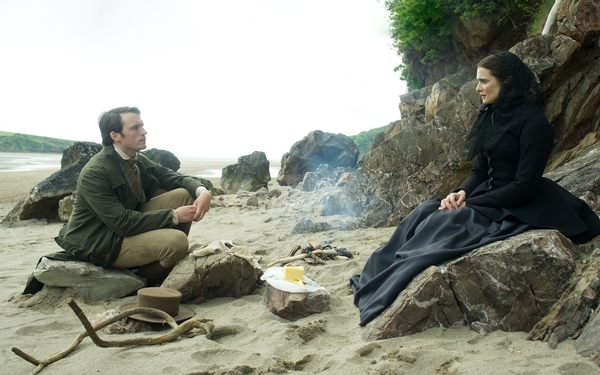 With her wide-ranging flair for serious drama, absurd comedy, nail-biting crime stories, legal thrillers and romantic roles of all categories, Rachel Weisz may be the most unclassifiable marquee actress in cinema today. She appears in more types of movies than is mathematically possible.

That chameleon finesse continues in her latest role. In the Gothic romance “My Cousin Rachel,” which opened Friday, she plays an enigmatic 19th-century beauty who may have murdered her wealthy husband. From scene to scene, she transforms from wrongly accused innocent to seductress to ruthless menace and back again.

Enticing and utterly unpredictable, this “witch” keeps the film’s cast of characters and viewers guessing right until the unnerving climax. The film is based on a novel by Daphne du Maurier, whose macabre works also inspired the films “Don’t Look Now,” “Rebecca” and “The Birds.”

In a recent phone conversation, Weisz said she was drawn to the role in part because “if there is a problem in the depiction of women, it’s that the stories rob them of any complexity.”

She added, “You and I know that in life women are very complicated people. Somehow in film it can get a little reductive. It’s great to have a lead role where there are layers.”

She likes that viewers are kept guessing about the character’s true nature.

“It keeps the story very emotional because people watching it are absolutely sure they’re right whether she’s a bad person or a good person.”

The same applies to the film’s period setting, which allows the story to create layers of old-school mystery that wouldn’t suit a contemporary chiller. Weisz has played women across thousands of years of history without choosing a particular era where she feels most at home.

“I don’t mind whether it’s set in the past, present or future. It’s just the story that interests me. It’s wonderful to be in a period film because you have different textures and horses and sidesaddle and corsets and costumes. And I like these quite modern, edgy, taboo subjects, a woman who might be a murderess and who’s sexually free when she wants to be free. That’s more interesting set in 1860 than 1960.”

Her Hollywood debut as Brendan Fraser’s damsel in distress in 1999’s horror blockbuster “The Mummy” gave the film a delightful dose of camp humor. No sooner is the beautiful but clumsy librarian introduced than she accidentally knocks over every single bookcase in the Museum of Antiquities domino-style.

The hit movie made her a star, a status she quickly made use of. Deciding on “how the character meets the story and how the story meets the director,” she has partnered with some of the most exciting and exotic filmmakers on the international stage, from Wong Kar-wai (2007’s “My Blueberry Nights”) to Peter Jackson (“The Lovely Bones” in 2009).

Brazilian director Fernando Meirelles’ adaptation of the politically charged John le Carré novel “The Constant Gardener” won her an Oscar in 2006. In Greek writer/director Yorgos Lanthimos’ “The Lobster,” which was released in the United States last year, she shared a strange comic dystopian romance with Colin Farrell, who needed to win her heart to prevent his transformation into the titular crustacean.

“Film is such a director’s medium. You do your performance and then there’s the footage and the director has to put it together. That’s an incredibly hard thing to do, to put a movie together, set a tone and tell a story. So I try to just work with directors who are really talented, who take risks and are bold. Because why not? It’s hard to make an original film. People underestimate it.”

It doesn’t always work as planned. After shooting a week for Terrence Malick’s “To the Wonder,” the famously fickle filmmaker left her work on the cutting-room floor.

“The experience was very, very interesting. I got to work with Terrence Malick. You didn’t get to see it, but I know what it was like. He often shoots more than he’ll use, and I went in knowing there was a good possibility it would happen,” she said. “I didn’t enjoy it (getting dropped from the final cut). It wasn’t pleasant. But it wasn’t unexpected.”

Such creative experiences are essentially what Weisz works for. “I’m not for sale,” she said. What she seeks is “the fulfillment of meeting a challenge.”

She added, “It’s very scary to be performing. It’s like, ‘Am I going to come up with the goods, will I be able to do it?’ Every time it feels like a crapshoot, and that’s interesting. It’s kind of like the carrot keeps moving in front of you. I never felt I’ve figured it out, that I really know how to do this. It’s a moving feast and constantly challenging and therefore constantly rewarding.”