Troy Duffy: Speaks Out About the Reawakening of The Boondock Saints 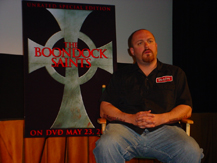 On the phone, Troy Duffy has a calm, laid-back demeanor. He often ends sentences with a man, sounding like the Dude from The Big Lebowski. That might be somewhat surprising, considering he is the writer/director of the violent cult hit The Boondock Saints (1999), which now gets the unrated, double-disc DVD treatment. Only when the conversation steers towards Overnight (2003), the documentary about the making of Boondock that portrays Duffy in an unflattering light, does he get somewhat edgy. Still, he remains optimistic about the future of Boondock and his career. The story is Hollywood folklore now. Duffy had a deal to make the film for Miramax, all but guaranteeing a sizable theatrical release, but that fell apart. Franchise Pictures came on board to produce the film and Boondock eventually received a DVD release. Seven years later, it is a cult classic within mainly the college-aged, young adult male crowd. Duffy says he‚d like Hollywood to wake up to a phenomenon like this one. „They [the fans] weren‚t solicited by some ad campaign,‰ he remarks. „It‚s their movie. They discovered it. ? They‚re not doing this re-release because it‚s shitty,‰ The film is about two brothers (Sean Patrick Flanery and Norman Reedus) who decide to take the matter of Boston‚s criminal underworld into their own hands, all while being tracked by an invested FBI agent (Willem Dafoe). The unrated edition of the film is more violent than the original. According to Duffy, some scenes feature more slow motion and blood. „The new version is actually the old version,‰ he says. „The first cut was rated NC-17.‰ As a result, Duffy had to go before the MPAA board and argue his case to get an R-rating, which ultimately failed. „I said there have been much more violent scenes in other films. It‚s kind of a joke. I mean, Scarface has the chainsaw scene. I don‚t think Boondock even approached that kind of violence.‰ Duffy makes a good point here as the extra blood in the unrated Boondock can‚t hold a candle to the aforementioned Al Pacino gorefest. Duffy has been busy with getting the sequel, All Saints Day, off the ground. He says he has written the script, met with studio executives and is hoping to set something up with Fox. He says he might even reunite his old band, the Boondock Saints, to do a couple songs for the soundtrack. The sequel would have nearly twice the $5.4 million budget of the original, he says. However, Duffy is currently facing a legal battle, which he couldn‚t comment on too much. „The rights are tied up in courts,‰ he says. „It‚s now in the hands of very capable lawyers. We‚re in a real fight here. It‚s almost like having a kid in jail. You know he doesn‚t belong there, but you have to go through the arbitrary, bureaucratic process.‰ At this point, Duffy sounds like a more seasoned veteran of the business. „It‚s almost like I got an Ivy League education in one shot,‰ he says, mentioning several lessons he‚s learned through the Boondock process. For example, „if you make a good film, it‚s going to find fans. Trust the fans.‰ Before and during filming, „you have to pick your battles, but don‚t compromise in terms of casting.‰ Overnight notoriously showcases these battles, among others, over casting. Shortly after he got the production deal with Miramax, Duffy hired two friends, Tony Montana and Mark Brian Smith, to film the process. The result shows Duffy making disparaging comments about actors while heavily praising his own work. When the subject comes up, he gets defensive and says he doesn‚t want to talk about it. But it‚s eventually clear that he still has a lot to say about the film. Duffy says he hasn‚t seen Overnight yet and doesn‚t plan on it. „It‚s through the minds of two people with an agenda,‰ he says. „If you‚ve ever had a friend that stabbed you in the back for money, you know how I feel. I started filming when I was 25. Now I‚m 35. Look, I understand that I‚ve made mistakes, I‚ve said bad things, I‚ve misbehaved.‰ As a final stamp on the conversation, Duffy says he doesn‚t think Overnight had any effect on his film. "Boondock was a huge cult hit before," he says, "and a huge cult hit after." The Boondock Saints Special Edition DVD is currently available.
Article posted on 5/30/2006
This article has been viewed 3301 times.