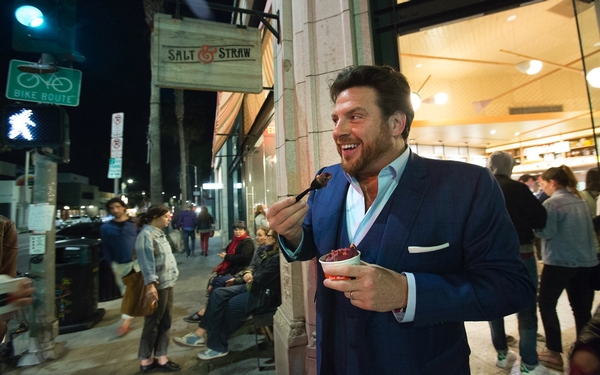 Chef Scott Conant twirls his pasta like a boss. His right hand angled, the fork at 20 degrees — the movement is fluid and effortless, like he’s tumbling a quarter along his knuckles.

The chef of the new Italian restaurant the Ponte in Beverly Grove is sitting at a table at Cento, the pasta-focused lunchtime pop-up inside of Mignon in downtown L.A. that’s run by Avner Lavi, a former pasta cook at Bestia and Sotto. Conant is dressed in a tailored, three-piece, navy suit, with his signature auburn mane brushed straight up and back. (If he decides to leave the culinary world, he could have a second career as a spokesman for a shampoo company. The hair hasn’t elicited its own Twitter profile yet, but Conant says there was a hashtag.)

“Hey, I woke up like this,” he says. “Just remember I have the intellectual property on my hair.”

Conant digs into a beet pasta, one of Lavi’s specialties, made with a dry pasta and a sauce of roasted beets, poppy seed and brown butter. Twirl, bite, wipe, repeat. He is through a quarter of the bowl before he comes up for air, his napkin a crime scene of smeared fuchsia and poppy seeds. This is the first hour of a three-restaurant, eight-hour, 18-bowl pasta crawl for Conant, who is known best for his pasta al pomodoro, a humble bowl of spaghetti, tomato and basil.

That pasta al pomodoro is a dish that has followed him, in one way or another, to every restaurant he has opened, including the now-closed Scarpetta in Beverly Hills, the Ponte, Fusco (his new New York City restaurant named after his grandmother) and Mora Italian, his restaurant in Phoenix.

“I actually rarely eat pasta,” Conant says as he twirls more strands of spaghetti onto his fork. “I love it so much that I have to restrict myself. Otherwise I’m like an animal.”

Conant is enamored of Lavi’s beet pasta and another dish, spaghetti with uni. He keeps using that stereotypical Italian hand gesture — his fingertips together, his arm in an upright wave, to express his delight at the pastas.

Conant grew up in Waterbury, Conn., surrounded by Italian Immigrants from Pontelandolfo, which happens to be the inspiration for the name the Ponte.

“I think when you allow the product to shine and get out of its way, that’s how you create greatness.”

“I think the food scene in L.A. really speaks for itself,” says Conant as he looks around the room. At 5 p.m. Lavi will pack up and the space will turn back into a French wine bar.

“I remember seven years ago when I first started coming to L.A.,” says Conant, “I would go to these little random shopping centers and eat really good food, but now it’s happening more and more. Chefs had really good sous chefs or cooks, and now they’ve gone out and are opening their own places and being creative — like this place.”

When Conant walks through the doors at Osteria Mozza, Nancy Silverton, Mario Batali and Joe Bastianich’s Italian restaurant on the corner of Melrose and Highland avenues, people turn in their chairs to look. Because although Conant may not be as recognizable as Batali, he’s spent considerable time on television as a frequent judge on the Food Network shows “Chopped” and busting the chops of his friend Bobby Flay on a show called “Beat Bobby Flay.”

At a table in the corner of a back room, Conant asks the server to recommend some pastas, commencing a feast that will include salumi, prosciutto-wrapped grissini with truffle butter, not a few items from Silverton’s mozzarella bar — and pasta. The bucatini all’ Amatriciana arrives in a deep red swirl; the ricotta gnudi are surrounded by garlic scapes and English peas; the ricotta and egg raviolo comes as a single pillow of ricotta and egg swimming in browned butter; and each strand of tagliatelle is perfectly coated with a rich oxtail ragu.

Conant waits for everyone at the table to bring out their iPhones before delicately cutting into the raviolo. The yolk spills out in an orange pool.

“What are you guys going to eat?” he jokes.

With all those restaurants and all that television, you could categorize Conant as a celebrity chef, but he’s quick to disagree.

“I think the day you hear me refer to myself as a celebrity chef … forget about it.” He says that last bit as a single word, like he’s walked straight out of that scene from “Donnie Brasco.” “I don’t think of myself as famous. Listen, I’ve always prided myself on being a good cook.” He twirls a bit of bucatini onto his fork and takes a bite. “Oh, my God, that’s good.”

Rather, Conant refers to himself as an “old school” guy, a guy who grew up in Connecticut, and started in the kitchen as a dishwasher when he was in high school, working 60 hours a week for $5 an hour.

A couple of hours later, Conant takes in the crowd at Felix, chef Evan Funke’s new pasta palace on Abbot Kinney Boulevard in Venice. He takes a seat across from Funke’s pasta laboratory, a brightly lighted box in the center of the dining room, where Funke stands for hours surrounded by flour, kneading and cutting his fresh pastas.

Conant agrees to let Funke feed him, then settles in for a procession of 12 bowls of pasta — every one on the menu. First, Conant swoons over the pappardelle, delicate sheets of pasta in a ragu Bolognese “vecchia scuola” with 48-month Parmigiano-Reggiano.

“The texture is silken and smooth and not too dense,” he says as he lifts a ribbon of pasta. “So good, that pappardelle. Forget about it.”

The tonnarelli cacio e pepe arrives and Conant leans in to smell the plate. “You smell that pasta? You smell that flour? There’s something so comforting and warm about that.”

The trofie, tight little screws of pasta coated in a bright green pesto Genovese with pecornio di malga elicit exclamations of profanity from Conant, who even on his 15th bowl of the day, can’t help but go in for another bite. “I’m not ready to tap out,” he says. “This is good … “

Conant handles the remaining rigatoni all’Amatriciana; orecchiette with sausage; and gnocchetti in an oxtail ragu napoletana like a champ, trying more than a little of each before proclaiming Funke a “pasta master.”

The next morning Conant will leave to go back to Arizona for a few days, where he has recently moved his wife and two children, and where he has another one of his restaurants, Mora. Then he’ll head to New York City to check on Fusco.

“When I was a young cook, none of this was in the cards,” says Conant of his growing restaurant empire. “I said, maybe at the end of my career I can have a piece of a restaurant on the Upper East Side and toil away in the kitchen every night. I can’t imagine a worse existence than being shackled to one restaurant. It’s not my personality.

Special Features
Southern California has given the world so much. And fast food too
1,255 views