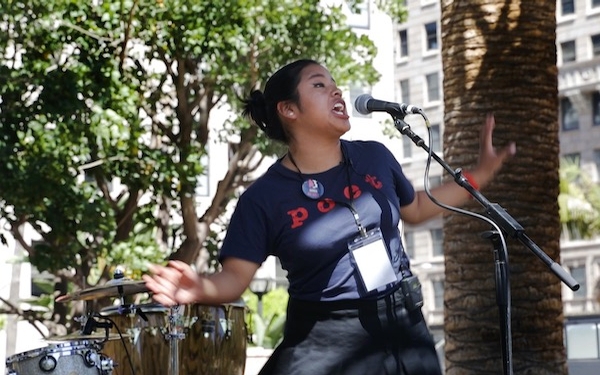 High school senior Vanessa Tahay recites a poem of hers during a public recital at Pershing Square in Los Angeles on May 23, 2017. (Gina Ferazzi/Los Angeles Times/TNS)

At 4 feet 11, Vanessa Tahay is what you might call a chaparrita.

Her skin is dark, her accent is thick, and if you ask her, she will tell you these are the things she’s proudest of.

Tahay is a poet, and at 18 she’s considered among the best in the city. The high school senior has performed and competed not just in Los Angeles but in San Francisco and Washington, D.C.

When she is onstage, audiences often go silent. They also laugh, holler, cringe and cry.

She shuts her eyes and the words flow, raw with emotion — in English, Spanish, Spanglish and K’iche’.

She will tell you about the white classmate who asked her to speak in English and how she told him: “No … hell no.”

“It took courage for my tongue to speak, and it will speak whatever and however it wants to.”

She will tell you about her mother, who wakes at 5 a.m. for work and sways her wide hips to the sound of cumbia. About her tias who invite you to coffee, sit you down at their table and ask a million questions about your novio. About her grandmother, who likes to visit Los Angeles but will never leave Guatemala, because in this country, in the morning nothing smells like wet dirt.

Back in Nimasac, Tahay was known as “Chata” because of her little nose. She had a fat, lazy cat named Garfield and she was always late to school, though it was just feet from her cinder-block house.

Her village was at the base of a huge mountain range, among the grandest in Central America. Everyone spoke K’iche’ and wore the traditional Mayan huipiles and cortes.

Tahay preferred jeans, which made it easier to climb her grandmother’s avocado and peach trees. She used to beg Dona Chabela to let her go with the other children to parties in the village, but her grandmother always refused.

“I don’t want you getting into trouble,” she’d say.

It took years to persuade Tahay to join her parents in Los Angeles. Leaving behind her world terrified her. So did the tales told of the journey north.

But there comes a time when every child yearns for a mother’s love.

So at age 11, she made her way to L.A., crossing rivers, deserts and mountains.

She told the story in “A Dream in Five Days.”

“Sitting on the desert

Dying for a drop of water

It’s not fun thinking about your family

About everyone you left behind

No beauty so close to bones

In less than one week

Maybe someone will stare at my skeleton the same way”

Tahay showed up to her new school in light blue pants, a green shirt, red shoes — her definition of cool.

But what she was, her classmates told her, was chunti.

She never spoke, so they called her “mouse.”

She was dark, so they called her “negrita.” They teased her for being short and for being different.

“How do I defend myself?” Tahay thought. “I don’t know how.”

“Keep going,” her mother would tell her. “At some point, you will learn.”

She spent hours after school and on weekends watching the same DVDs: “Ingles Sin Barreras,” or “English without Barriers.”

Tahay’s older brother, Elmer, persuaded her to go to the after-school poetry club.

She agreed to go because she heard the boy she liked would be there.

In the last six years, English teacher Laurie Kurnick has turned Cleveland Charter High School’s poetry program into one of the most respected in the city. Her team draws from the likes of D.H. Lawrence, Pat Mora and Kendrick Lamar to create poems about their own lives. They are intimate portraits — some funny, some painful — about puberty, absent fathers, love, police abuse, racism.

The first time Tahay heard such words, chills went up her spine.

“I wish I could write like that,” she thought. “I want to say something.”

She wrote her first poem about her first year in America.

She called it “Invisible.”

The day her turn came to recite in front of the team, she broke down crying. She cried for 15 minutes.

But she kept at it despite her less-than-perfect grammar, spelling and diction.

So when you hear me say “Es-Traaa-Beh-Ree”

It’s not because I can’t speak

She wouldn’t tell her friends about her poetry because she worried they’d call her corny.

But with time, her poems changed her.

“They gave me pride,” Tahay said. “They told me I’m worth something.”

Soon, she was brave enough to perform in her high school’s auditorium and nearby schools. Students cheered her on and approached her after she spoke. They thanked her for having the courage to say the things they wish they could say.

“She had this innocence,” Kurnick said. “This willingness to be genuine and show you things you don’t ever see.”

In her junior year, Tahay’s poems caught the attention of Matthew Cuban Hernandez, a top coach for Get Lit.

Get Lit is a local group that partners with Kurnick and teachers from nearly a hundred schools to promote spoken word poetry. Coaches help poets with their writing and showmanship, then bring them together once a year to compete in a high-energy contest called the Classic Slam.

Cuban Hernandez saw in Tahay maturity and passion not common in a 16-year-old.

“The potential that is there is endless,” he said.

Our mother did not teach us to stay down

The desert taught us to keep fighting

In front of us there are obstacles we must break

Do not be ashamed of who we are”

He suggested that Tahay try out for the Get Lit Players, a performance team made up of the program’s top poets. Months later, after she grew stronger onstage, he recommended her for Brave New Voices, the most elite team of all.

Tahay quit the track team, her job and her social life to dedicate herself to poetry. She was accepted as one of the six best youth poets in the city.

On a recent afternoon, she and her teammates from Cleveland High School loaded up on tangerines and pretzels during a two-hour rehearsal. The Classic Slam was three days away and the poets had to perfect the delivery of every verse, breath and gesture.

The team had taken second place the last two years. This time, Tahay was a senior and she was determined to bring home the trophy.

“No,” Tahay said. “Never say that. Never be satisfied.”

The morning of the competition, several thousand teens poured into the Los Angeles Theatre Center to face off with their best poems. They would be judged on their energy, creativity, accuracy and passion.

Inside theater No. 3, where a disc jockey blasted hip hop, the room roared as Cuban Hernandez warmed them up with push-ups and a dance-off. Tahay, in her favorite baseball cap and Oxford shoes, was the first to hit the floor.

“Why do we write?” a Get Lit coach called out to the crowd.

“For freedom!” one student yelled.

When Tahay’s turn came, she rose from her seat, walked to her place behind the microphone, lowered it and closed her eyes.

This would be her final time competing in the Classic and her team would go on to win it all.

“You can do it!” someone yelled.