Shopping: If you want a date, you guys need to ditch these fashion fails 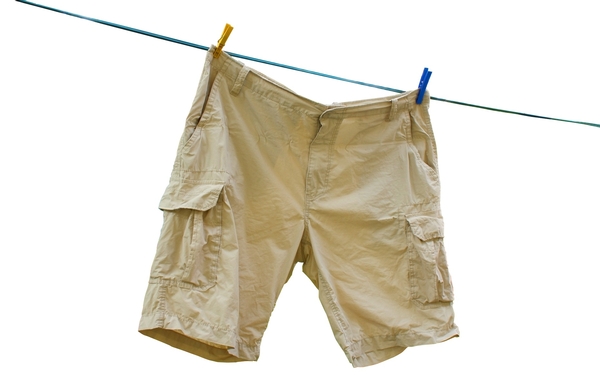 They’re dumpy and dorky, silly and bulky, and way too long, usually falling so far past the knees that grown men end up looking as if they have short little elf legs. The bigger problem, of course, is that the shorts are completely inauthentic in that nobody, except maybe MacGyver or Indiana Jones, needs that many pockets and the men who insist on these shorts are, alas, neither.

Yes, to the dismay of people of fashion, men have continued to wear cargo shorts, apparently unconcerned about their appearance and also unconcerned about being authentic — though in the age of not-so-real reality stars, alternative facts and fake news, perhaps we shouldn’t be surprised.

According to a recent study by the dating app Hater — it matches people who hate the same things — guys who love cargo shorts are the least likely men on the site to get a date. (These men also like long shorts and staying inside on nice days. And for what it’s worth, the most popular men on the site like Pabst Blue Ribbon and V-neck sweaters.)

Which, in the interest of public service, brings me to other warm weather dating deal breakers.

Guys, if you don’t want to spend the summer alone, you’ll need to stop wearing these things.

Flip flops and sandals. Your feet are gross — sorry, guys, but it’s true — and no one wants to see your hairy toes and ragged toenails. So this is a situation of aesthetics. Also, flip flops are not shoes and should not be worn outside of your backyard or cottage retreat or beach because they are just too casual for anywhere else. This is also a situation of appropriateness. And if you think women don’t notice, think again. We always notice your shoes — or lack thereof. It’s just one of our things. Men who pay attention to their footwear tend to pay attention to details, and that is a good thing. Men who wear flip flops come across as sloppy and out-of-touch about their own shortcomings.

Muscle shirts or tank tops. I’ve said it before, I’ll say it again: Armpit hair is icky. Few people — if any — want to be confronted by it every time you raise your arm to reach for something. And no one wants to be smothered by it during an embrace. It’s not only unsightly, it creates a weird sort of forced intimacy. Especially these days when everyone hugs everyone else — even casual acquaintances — hello and good-bye instead of shaking hands. It’s just too much of … you. Same goes for back hair. And too much is worse than not enough.

Backward sunglasses, backward baseball caps. Do you have eyes in the back of your head? No. So there is no need to wear these items backward. Doing so makes you look ridiculous and somewhat delusional. Being delusional is not an attractive quality in a potential date.

Athletic shorts as casual wear. Yes, they’re comfortable, but so are boxer briefs and you don’t wear those in lieu of pants, do you? The point is there is a time and a place for most things, and the time and place for those long and voluminous athletic shorts — which, by the way, always look as if they are weighted down by sweat even when they are not — is Saturday morning at the gym. Knowing the right setting and right time for clothing says a lot about a guy. It says he respects not just himself, but those around him and wants to make an effort when he’s in public.

Dull, dingy (formerly) white T-shirts. Use bleach. Use OxiClean. White T-shirts are a classic. Think Springsteen, James Dean. A man who appreciates and respects a classic is a good man.

So, guys, if you end up spending the summer alone, don’t say I didn’t warn you.

Georgea Kovanis writes for the Detroit Free Press. Contact her at gkovanis@freepress.com.