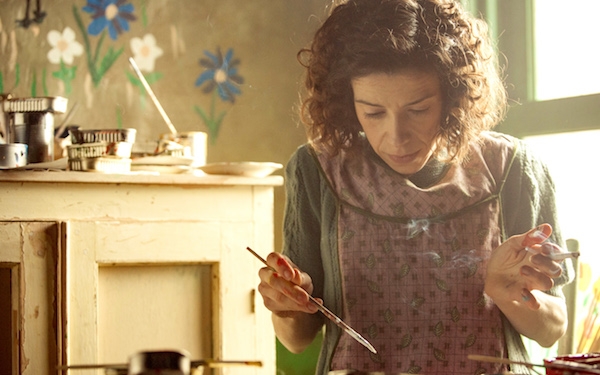 If you look through the frosted window of a tiny house in the odds of nowhere, chances are you expect a reflection of the outside landscape; a place of darkness, of cold, or of isolation, perhaps. Surely you wouldn’t happen upon swaths of color, walls covered in art, and a couple, odd yes, but a couple in love nonetheless. What I mean to say is, yes, you are right in expecting little, but that’s only because you haven’t met Maudie yet.

“Always with a life story, it’s about where you start,” declares director Aisling Walsh of her latest and rather ambitious project Maudie. It’s ambitious due to the simple fact that it is a true story of a woman who brought color to an otherwise gray corner of the world, and did so despite being handed a rather dim deck early on.

For Walsh and writer Sherry White, they start with Maud losing everything. Played by Oscar-nominated Sally Hawkins (Blue Jasmine, Happy Go Lucky), Maud found herself rather alone most of her life. With arthritis-riddled hands, a twisted back, and a limp in her step, it was clear that Maud was physically different than the rest of her peers. But it is in the moment when her family disinherits her, leaving her eccentricities to be cared for by unwilling far off members, that ends up changing Maud’s life forever. For it leads her to Everett (Ethan Hawke, Boyhood).

A stern, socially awkward, and overtly ill-tempered loner, Everett is as much in isolation as Maud is, though intentionally so. It’s when he puts up an ad for a live-in housekeeper that he has to let someone else in. Let it be known, he definitely doesn’t expect someone like Maud to show up for an interview, nor does he make it easy for her when he hires her, but slowly, Maud and Everett become each other’s only company in the often-desolate landscape of their Nova Scotia home.

For Walsh, the idea of Everett and Maud together as these uniquely physical characters brought up images of haunting clarity.  “I had a vision when I first read the script: a scarecrow and an injured bird. That’s what they reminded me of. You see them walking next to each other in that landscape and that’s what they become,” she says.

They become more. As they occupy Everett’s tiny 12 x 12 cottage on an empty shore outside of town, Maud begins to show her true colors—through paint that is. It starts when Everett shows contempt for her outspokenness, contempt that she’s grown use to all of her life, where painting gives her relief. She starts by painting trees on the inside walls of the house, which as an audience we hope that Everett doesn’t overreact about. It turns out, with a simple grunt and a shuffle of feet, he doesn’t mind it too much. Nor does the general public who, over decades, begin to catch wind of her modest and meek work.

As Walsh explains, “It was her personality and her positivity about the world [that drew people to her work.] She would never have survived if she let the negative side of things in. She comes across as being positive and in love with the world and that’s what you get from her pictures. No sense of isolation, but a sense of understanding of the landscape she lives in…There are no dark areas in her work. She never saw that darkness in her life, and that’s what is extraordinary about her, and that’s really the gift she gave [Everett].”

Throughout the years her body of work, especially their house, reflected a joy deep within Maud that outsiders found irresistible. She even became distinguished within her genre of folk art itself, the world of Art Naïve, where formal training is cast aside and left for inner guts to take the lead in simple storytelling. That’s why their quaint cottage, which becomes covered in her doodles and illustrations was so important for Walsh and her crew to get just right.

“The biggest decision we made was to actually recreate the house and not put it into a studio, which we was a conversation of course we had because of the weather. But the designer said he could build one strong enough to stand wind and rain and all that. I spoke to Ethan and Sally about it and said ‘We’re going out there. There isn’t anywhere to hide,’ but then again, that’s the nature of this film. In this 12x12 room there isn’t anywhere to hide either,” Walsh adds frankly.

In that sense, Maudie takes the trials of marriage head on and in a rather robust way. There may be no better test of love than to throw two people into a room for 35 years in blustery weather to see how they fair. And that is precisely what Walsh wanted to explore using sensibilities from her own home, especially in her production design and cinematography. By using claustrophobic spaces within agoraphobic ones, Walsh creates a sense of timelessness, or at least a place where two people who couldn’t care less about the time ticking on by.

“You know, you’re in this house, but then you walk out the door into this endless amazing landscape and that maybe from deep within me stems from Ireland, where there’s nothing more powerful than standing in a field looking at the Atlantic Ocean,” Walsh explains. “Then you can say I know how small I am in this world. I wanted to isolate them within this already isolating space. And then I wanted to bring in the nature through her painting as it develops, by showing how that house evolves over 35 years. For me her greatest work of art was that house.”

Those many years in that house indeed allowed Maud, Everett, and everyone who encountered her art to welcome even the smallest rays of light into this often dark world. Walsh’s Maudie drives that home, urging us to be the ones to peek through the unexpected window, for we will be welcomed in from the cold. This too could be our home.

Maudie is in theatres now.  Attend a Q&A in Los Angeles with Director Aisling Walsh on Friday, June 16th at The Landmark after the 7:20 PM show and on Saturday, June 17th aft the Arclight Hollywood after the 7:30 PM show.  Purchase tickets here!