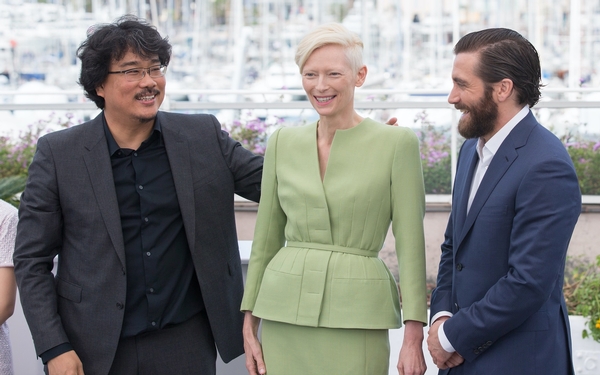 Bong Joon-ho isn’t eating too much meat these days.

The South Korean writer-director known for intense, genre-bending thrillers like “The Host,” “Memories of Murder” and “Snowpiercer” is grabbing a quick dinner just a few floors down from Koreatown’s CGV Cinemas, where audiences are lining up for an advance screening of his latest picture, “Okja.” The smell of beef sizzling on tabletop grills is inescapable, but tonight Bong is sticking to cold naengmyun noodles and kimchi dumplings (“Not beef!” he notes, hoisting one aloft with his chopsticks) as part of a steady reduction in meat consumption that he largely attributes to his new film.

One of the highest-profile features produced by Netflix, which will begin streaming it Wednesday for audiences worldwide, “Okja” follows a 13-year-old Korean girl, Mija (Ahn Seo-hyun), in her quest to save a genetically modified “super pig” named Okja from being chewed up by the forces of 21st century global capitalism. By turns thrillingly inventive and politically gutsy, the movie also has an emotional core that harks back to classic children’s movies, at times suggesting an action-adventure mash-up of “Free Willy,” “Charlotte’s Web” and “Soylent Green.”

It also plays like a companion piece to Bong’s 2006 film, “The Host,” another creature feature wrapped in a satirical warning about man’s destructive effect on his environment. The implied horror of “Okja’s” slaughterhouse climax could put you off bacon for a lifetime, though Bong notes that converting viewers to veganism was hardly the main objective.

“The film does address the environment and animal rights, but it’s more about capitalism and the system that we live in because of it,” he says. “The animals are experiencing a holocaust, basically, but to the companies, it’s just mass production.”

The company in this case is the fictional Mirando Corp., run by rapacious twin sisters Lucy and Nancy Mirando (both played by Tilda Swinton) and fronted by an aggressive Steve Irwin-style TV personality (Jake Gyllenhaal). Okja is one of 26 genetically enhanced piglets that Mirando sends out to be raised on farms all over the world, then recalls to its New York headquarters years later for inspection, breeding and eventual execution — but not if Mija, Okja’s caretaker and best friend, has anything to say about it.

Sporting thin eyeglasses and unruly hair atop a tall, bulky frame, the 47-year-old Bong looks every inch the giddy, overgrown film nerd, an impression borne out by the way he peppers the conversation with the names of favorite directors (along with numerous Korean expletives that our interpreter is too polite to translate).

The dizzying range of his cinephile enthusiasms — they include Alfred Hitchcock, Joseph Losey, Claude Chabrol, Shohei Imamura, Kim Ki-young and Jonathan Demme — should come as little surprise to anyone familiar with his work, which has become more and more international in scope over the last several years.

“Back in 2003, it was hard to imagine a Korean director making English-language films with Hollywood stars,” says Kim Moo-ryoung, a producer on “Memories of Murder.” But she adds that the strong international response to the film, particularly its Korea-specific political elements, expanded Bong’s sense of cinema’s potential as well as his own.

It’s a progression that began with his 2014 graphic-novel adaptation, “Snowpiercer,” a breathless post-apocalyptic thriller set aboard a train carrying the last remnant of humanity. That film starred Chris Evans along with Swinton, Ed Harris, Octavia Spencer, Jamie Bell, Romanian actor Vlad Ivanov and Song Kang-ho, the top Korean star who also anchored “The Host” and “Murder.”

If “Snowpiercer” and “Okja” feel like products of (and metaphors for) an increasingly global film industry, Bong maintains that his casting and location decisions of late remain as story-driven as they were in his Korean productions.

“I am just led by where the story goes,” he says. “In the case of ‘Snowpiercer,’ it’s every language, but (it all takes place on) one train, one linear world, so it allowed me to make a multinational movie quite naturally. ‘Okja’ is totally different in that there are two worlds that don’t collide. I wanted a feeling of bewilderment: How can a person from one universe come into contact with a person from another?”

For Swinton, a longtime admirer of Bong’s films, starring in “Snowpiercer” and “Okja” (she also served as a co-producer on the latter) allowed her to witness the director’s trademark precision on a more ambitious canvas.

“He is completely dedicated to a moment-by-moment exploration of how peculiar and specific existence is,” she says. “One doesn’t have to work within a $5-million budget or less to be that precise, that individual, that complicated. It’s thrilling to see him take that specificity and put it into a film of this size.”

Dooho Choi, a producer on “Snowpiercer” and “Okja,” notes the near-Kubrickian intensity of the director’s approach to storyboarding and shot construction. Far from making the work feel stilted or detached, Bong remains alive to the in-the-moment possibilities of the actors in those meticulously constructed frames.

“It’s almost like setting up dominoes, and then the fun part is watching them all fall,” Choi says. “I think the best moments for him are when the actors do something completely crazy, beyond what he could have come up with.”

“It’s not a controlled environment but a prescribed environment,” Swinton agrees. “And within those parameters you are not only free, but you are invited to amuse him.”

Some might say that Bong has gone Hollywood, a misleading charge given how few U.S. studio filmmakers bring as distinctive an auteur signature to their work. Fewer still routinely attempt such a heady fusion of action and ideas, character-driven emotion and state-of-the-art visual effects.

There’s also the fact that much of Hollywood remains highly suspicious of Netflix, which produced the film with Plan B Entertainment. In the end, Netflix was the only outfit willing to put up the film’s $50-million production budget and grant Bong full creative control.

The director is quick to praise Netflix for giving him the freedom to make the film without compromise. The company’s sole criterion was that “Okja” be shot digitally rather than on film, which spurred Bong and cinematographer Darius Khondji to use the Arri Alexa 65, the digital equivalent of a 70-millimeter camera.

But Bong also acknowledges that “Okja,” with its painstakingly designed and computer-generated pig protagonist, was made to be seen on the big screen.

“The best way to watch a film is in the theater,” he says. “But for directors who make weird films like mine, the digital studio platforms are a great creative opportunity. I do believe that the two (modes) can coexist.”

“Okja” will receive an awards-qualifying limited release in Los Angeles and New York theaters, also starting Wednesday. In L.A., the film will be shown at iPic Westwood and Laemmle’s Monica Film Center in Santa Monica as well as a special 35-mm engagement at the New Beverly Cinema on July 7-8.

Netflix is not planning to report theatrical grosses for “Okja.”

The distributor issue caused friction at the recent Cannes Film Festival, where cinema purists decried the inclusion of “Okja” and another Netflix title, Noah Baumbach’s “The Meyerowitz Stories (New and Selected),” in the main competition. The controversy continues in Bong’s native South Korea, where the country’s largest exhibitors — CGV, Lotte Cinema and Megabox — are refusing to screen the film because of its simultaneous Netflix release.

There is perhaps a measure of irony in the notion of “Okja,” an attack on a fictional conglomerate that exploits resources around the world, running afoul of various film exhibitors abroad. But for producers and Plan B partners Jeremy Kleiner and Dede Gardner, the problem begins less with the disruptive effect of Netflix than with the creative timidity of the U.S. studio system.

“Why is a vision of this level of singularity so difficult for studios that are in the theatrical distribution business? That’s the question,” Kleiner says. “Do we believe in, support and stand behind original visions of all shapes, sizes and forms of storytelling, or do we not?”

Bong’s seventh feature, which features the working title of “Parasite,” will be something of a return to basics: an all-Korean production starring Song and featuring a dysfunctional family of four. If history is any indication, the film will tap into what Swinton describes as the thematic concern that runs through all Bong’s films.

“It’s this existential question of feeling like a freak,” she says. “There are very few of us who have never felt like that, and that is the deal. That’s the existential deal.”

For Gardner, Bong’s ability to transcend cultural boundaries speaks to a vision as compassionate as it is ferocious.

“I think of Bong as a true humanist,” she says. “And when that happens, borders evaporate.”

When it premiered last month at the Cannes Film Festival, Bong Joon-ho’s “Okja” was one of two Netflix titles, the other being Noah Baumbach’s “The Meyerowitz Stories (New and Selected),” slotted in the prestigious main competition.

It was a long-overdue honor for Bong, given that two of his earlier films, “The Host” (2006) and “Mother” (2009), drew raves at Cannes despite having premiered in noncompetitive slots.

But the inclusion of Netflix, which mandates its original films debut on its service simultaneous with any theatrical release, in competition caused an uproar among French exhibitors, which enforce a strict three-year window between a film’s theatrical release and its streaming availability, and among festival observers who claim that streaming services pose an existential threat to cinema.

Cannes officials responded by declaring that, starting in 2018, only films with French theatrical distribution would be allowed to compete — a rule that will likely leave Netflix titles out of the running for the Palme d’Or and other festival prizes.

Because of its more traditional, theatrical-based distribution model, Amazon Studios, Netflix’s chief rival in the digital cinema sphere, will likely be unaffected by the rule change. Amazon was in competition at Cannes recently with Todd Haynes’ “Wonderstruck” and Lynne Ramsay’s “You Were Never Really Here,” which won two awards.

“Okja” may have been allowed to remain in competition, but in some ways the damage was done. The Cannes-versus-Netflix narrative dominated festival headlines for days, even spurring a polite but very public disagreement at a news conference between Pedro Almodovar, the president of the competition jury, and Will Smith, a fellow juror. (Smith, who defended Netflix as “an absolute benefit,” is starring in the company’s upcoming fantasy thriller “Bright.”)

An early technical glitch at “Okja’s” first screening drew jeers, and in the end, despite largely favorable reviews, the film left town without a prize.

When I met with Bong in Cannes several days after the “Okja” premiere, he flashed a tired but characteristically genial smile. One could sense his exhaustion at having to defend his distributor rather than to address the story and themes in his movie.