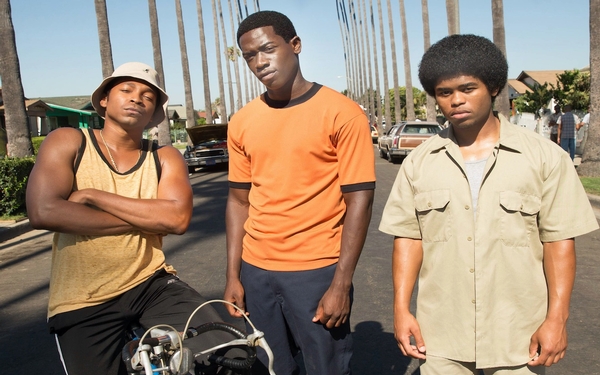 Three worlds collide in FX’s new series, “Snowfall,” and there to pick up the pieces are filmmaker John Singleton and co-creator Dave Andron.

The series, which premieres July 5, follows the wave of crack cocaine that inundated the kitchens of South Central L.A. and the board rooms of Hollywood in the early ‘80s.

“We are operating in three very distinct worlds in this show,” says Andron. “We’re in South Central. We’re in the CIA world. And we’re also in East Los Angeles as well. And it was really important to us … to be really thorough about all of it.”

The show starts in South Central Los Angeles. “This came from John,” says Andron. “We couldn’t ask for a better resource, really, than that for the authenticity of that world and being thorough.”

“I could speak to that because I think my life changed when I was in the eighth grade. I crossed the 405 Freeway for the first time into Tarzana, Encino, and enrolled myself into public school at Portola Junior High School in the Valley,” he says.

“(I went) from going to school in South Central, where I had to fight every day and defend myself, and get my lunch money taken …

“L.A., for me, is full of villages. It’s like all these disparate villages all around the whole city. And when you do that, and you go from one world to another, and you can’t help but open your eyes and see a difference. Everything is different: the way the people were interacting was different; the way you’re interacting with people was different. And it forms a character.”

The main character in “Snowfall,” is a young, black go-getter determined to make a better life for himself and seduced by the pecuniary power of selling crack. His focus and drive are similar to Singleton’s who decided when he was only 9 years old he wanted to be a filmmaker.

“I went to school with the express notion of graduating from film school and coming out like a first-round draft pick in the NFL, but in the film business. I was going to get out of school and I was going to make a movie. And I did,” he says.

One of the sources for “Snowfall” is Gary Webb’s articles and book, “Dark Alliance: the CIA, the Contras, and the Crack Cocaine Explosion,” which claim that the CIA was complicit in facilitating the drug trade.

“I think that what probably, frankly, happened was that people looked the other way,” says Andron. “I don’t think there was any conspiracy to bring crack to the inner city or destroy a people. I think they (the authorities) looked the other way. And look, at the time, cocaine was a rich white man’s drug. Nobody saw what crack would do to these people.”

The third component of the series is the Hispanic community of East L.A. and how the pestilence of crack cocaine infected its inhabitants. Emily Rios plays the ambitious daughter of a Mexican gangster who has already cornered the marijuana market in the region.

“She sees the financial gain in the cocaine world, and that’s what she wants to get into,” says Rios, who’s best known as Andrea Cantillo in “Breaking Bad.”

“And it’s against her family’s wishes to go ahead and do that, but she thinks she’s doing it for her family, in the gain of the better interests. What drew me to it was I’m not from L.A. necessarily, but the San Gabriel Valley. And so just growing up in it, I see the difference of all the different worlds,” she says.

Playing the young entrepreneurial lead is British actor Damson Idris, who says that crime and violence and greed are not unique to the United States.

“With regards to what’s going on in the news every day and seeing a different person’s been killed, I think it happens everywhere. When I was growing up and I was around 16 in London, many of my friends passed away. And that’s the same for a kid that grew up in Los Angeles, same for a kid who grew up in Thailand. I think we just need to come together as a people and not segregate each other’s issues and just focus on making it good everywhere.”

JAY LENO’S BACK FOR MORE

“Jay Leno’s Garage,” is pulling into its parking spot at CNBC for another season on Wednesday. Many people know that the comedian is mad about vehicles from the past. But he’s also entranced by the cars of the future. In fact, he recently bought a Tesla to add to his collection of 135 classic cars. “I think (Teslas) are fantastic. I have a 1909 Baker electric car that goes 80 miles on a charge, and I’ve got a new Tesla that goes 300 miles on a charge, and they’re both basically the same technology, except one is obviously a huge improvement over the other,” he says.

Tony Danza is high stepping back to television in a new cop show being produced by Netflix. Called “The Good Cop,” the 10-part series features Danza as a free-wheeling, disgraced former NYPD officer who bunks with his son, a by-the-book, cautious policeman. The dramady is executive produced by Andy Breckman, who created the winsome “Monk.”

Danza says when he first started acting he was constantly advised to procure a job with security. “Somebody said, ‘You should get a job with benefits.’ And my father said, ‘He doesn’t need benefits.’ My father had a lot of faith in me. If you think a little bit highly of yourself, you are willing to put yourself on the line again. You’ve got to be willing to lose to win – you’ll never win unless you’re willing to lose.”

Danica Patrick, the auto racing doyenne, will star in her very own reality show on Epix this fall. The series will examine Patrick, not only as a fierce competitor, but as a woman agonizing over lifestyle decisions, and as a crafty business woman … Curtis “50 Cent” Jackson and a former L.A. county undercover sheriff have formed a holy alliance and will produce a cop show for Crackle to premiere next year. Deputy Joe Halpin served in South Central L.A. for 17 years — 12 of those undercover. Halpin and Jackson (the power behind “Power”) will co-produce “The Oath,” a 10-part series that will star British actor Sean Bean.