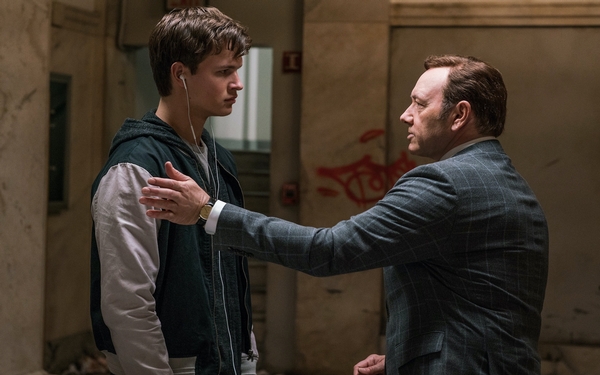 Edgar Wright tells an audience that has shown up for an early screening of his latest film, “Baby Driver,” that he’s had the idea for the movie spinning around in his head for more than two decades. The spark of inspiration that has burned all these years came one day when a 21-year-old Wright was cruising around listening to “Bell Bottoms” by Jon Spencer Blues Explosion.

He thought then that the song would “make a great car chase.”

The problem was that the timing wasn’t right. Wright had barely started attracting attention, having done a few short movies shot with a Super 8 camera and then with the very low budget feature film “A Fistful of Fingers.” There was loads of British TV before gaining notice in 2004 for “Shawn of the Dead.” But even with all of the praise for “Shawn,” Wright still didn’t feel confident to tackle a massive car chase movie that would play out to a very distinct soundtrack.

It took time but Wright finally got to take that musical spark and orchestrate a full movie. “Baby Driver” is a fast-driving, music-driven heist film built around a baby-faced driver (Ansel Elgort) and the crew of thugs put together by a mastermind known as Doc (Kevin Spacey). The film also stars Jamie Foxx, Jon Hamm and Eiza Gonzalez.

Their larcenous ways play out against a musical soundtrack that not only includes the Jon Spencer Blues Explosion tune but an eclectic mix of artists such as The Beach Boys, Beck, T. Rex, Blur, Barry White, Queen and Golden Earring.

The long wait to get the idea to the screen gave Wright plenty of time to figure out exactly which tunes would create the right rhythms for his film.

“When I started writing about 10 years ago, I had maybe eight or nine of the songs worked out,” Wright says. “I knew what those set pieces were going to be. I even made mixes with a DJ friend of mine, called Osymyso. We made these mixes where we put sound effects into the songs.

“When I finally started writing the rest of the movie, I would not write a scene until I found the right song.”

During that long span of getting the film made, the English writer/director decided he needed to get a feel of America. To do that he made a road trip from New York to Los Angeles and then from Los Angeles to Vancouver. What he saw sparked many people, placed and things in “Baby Driver” including the diner that was inspired by all of the roadside restaurants he stopped at while making his journey.

“Baby Driver” does continue Wright’s trademark of blending genres that normally don’t go together. In “Shawn of the Dead” it was horror mixed with comedy while “The World’s End” blended a buddy picture with science fiction. “Baby Driver” has all the trappings of a car chase film but by the final credits, Wright has morphed it into a sweet romance.

The mix and matching of film styles isn’t an overt action by Wright.

“It’s just something I do,” Wright says. “Maybe it’s because I make movies every three or four years apart, every one of them is like two movies in one. The original intention with ‘Baby Driver’ was that it was to be a car movie driven by music. It was going to be action and music together. Then the romantic part of it becomes a huge part of the narrative because it’s essentially about a guy in a dark and cynical world meeting somebody and aspiring to a regular life.”

Elgort, who had the task of playing the innocent looking super driver who longs for that regular life, knew as soon as he signed on to the project, it would be special based on all of the work Wright has done over the years.

“The script was bursting off the page the same way the movie does,” Elgort says. “I remember immediately Edgar showing me a bunch of animatics, mini animated versions of the scenes we ended up doing. It was storyboards that were moving because he wanted to see them move with the music.

“It was so impressive starting the day with the animatic, shooting the scene and then on-set they would edit it so we had the scene by the end of the day.”

Wright didn’t wait until his actors arrived on set to begin preparing them for his vision of how the action and music would flow together. Each actor was sent a special iPad where the music intended for a scene could be played at the proper time in the script.

Elgort has never worked with a director who has gone to those kind of pre-shoot lengths to make sure a scene turns out exactly right.

The decades-long journey by Wright to take a bit of musical inspiration and turn it into a feature film has come to an end. Wright has heard the reaction for “Baby Driver” at film festivals and screenings but he’s still having a problem fully realizing that he got the movie made.

“The fact that something I have been thinking about so long is actually coming out in theaters is crazy,” Wright says.