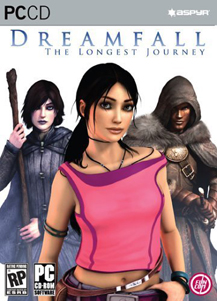 >This is a two-star adventure game, but it‚s an extremely solid one. If it stayed true to its heritage and concentrated solely on the adventure, puzzle and character-driven aspects of the story, it‚d easily be three stars or beyond.

Unfortunately, this gripping tale is marred by weird fighting and stealth sequences that don‚t seem to mesh with the rest of the lush narrative. The puzzles included are also easier than its predecessor („The Longest Journey‰), but I didn‚t mind that so much ˆ the driving force in this game is the story.

I‚m not going to say too much about the plot, except that it‚s a mystery story that marries everything from technology to magic with a little dash of intrigue. It‚s truly the highlight of the game, and it‚s fleshed out mostly in dialogue between characters.

If watching people talk bores the life out of you, avoid this game; but if you like seeing fully realized people in beautiful environments work out some nice plot twists, you‚ll love „Dreamfall.‰

The game is definitely for adventure lovers, though developers made an unfortunate attempt to incorporate some action. The fight scenes, which consist of blocking, strong and weak attacks, are simply awful. The controls are terrible, the fights feel vastly oversimplified and they didn‚t add to the overall enjoyable experience this game has to offer.
Article posted on 5/30/2006
This article has been viewed 2436 times.