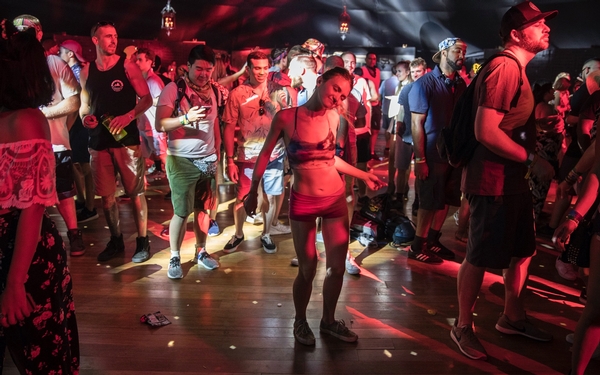 When did butt cheeks become a fashion statement?

For the last couple years, on the Venice Boardwalk or the Third Street Promenade in Santa Monica, I have seen young women wearing denim cutoffs that appeared to have been snipped too short, leaving part of their undercarriages exposed. I’d wonder: Do those girls realize their butts are hanging out?

And then, as if the fashion gods sent a memo to women from their teens to their 20s, butt cheeks were not just the occasional sight; they seem to have replaced Ugg boots as the must-have fashion item for a particular type of California girl.

During spring break this year, after the rain gave way to sunshine, girls broke out the booty shorts by the kajillions. Personally, I have never attended the Coachella music festival, but from the photos I’ve seen, it appears to represent the apotheosis of the exposed-glutes trend. A more descriptive name might be “Buttcheek-a-palooza.”

I cannot pretend this is a new development. But lately, it has reached a saturation point.

“Last summer at the Grove, there was a gaggle of five girls in front of us, and every single one of them had half their (slang for derrieres) sticking out,” said Michelle Dalton Tyree, 41, founder of the website Fashion Trends Daily, and the mother of a teenage girl. “I’m not conservative about trends. My fashion threshold is a lot higher than most parents, but that is something I would not let her go out of the house with.”

As a culture, we need to take notice, stake out our positions: Is the barely-there booty short a good thing?

Or does it, like so many fashion fads before it, represent the end of civilization as we know it?

Every few years — mostly because fashion abhors a vacuum — a different portion of the female anatomy is christened “the new erogenous zone.”

The objectification of women’s body parts is a tendency deeply embedded in the culture, aided and abetted these days by the celebrity industrial complex and, increasingly, social media platforms such as Instagram.

On the red carpet a few seasons back, we saw the advent of the “side boob.”

Then it was the “thigh gap,” an alarming trend because most normal-weight women don’t have an air gap at the top of their thighs, and have to starve themselves to get one. Eating disorders such as anorexia and bulimia can be deadly. Girls who resort to extreme measures to get or stay thin hardly need new reasons to throw up their avocado toast.

Two decades ago, the erogenous zone du jour was the upper part of a woman’s backside, just below the small of her back.

If you are old enough, you may remember Monica Lewinsky’s infamous come-on to President Clinton in November 1995, during what turned out (on so many levels) to be a disastrous government shutdown. She lifted her jacket to show him the straps of her thong underwear. Seems pretty innocuous now, but the act proved to be sexual Kryptonite for a man with low impulse control.

A few years later, another part of the thong became a fashion statement. That would be the “whale’s tail,” the “Y”-shaped strap of a thong peeking up over the waistband of low-rise pants.

“I remember when you couldn’t turn around without seeing all these thongs and the top half of someone’s butt exposed,” said Tyree, who regularly chats about the business of fashion on KPCC. “Now it’s the lower half. The booty pendulum swings every decade.”

Once upon a time, fashion designers set the trends, and saleable ideas would eventually trickle down to mass market retailers.

Along came H&M, Forever 21 and Zara, the “fast fashion” empires whose business models rely on translating runway looks into affordably priced clothing that gets onto shelves quickly.

More and more, fashion trends are set these days by pop culture icons such as the Kardashians, singer Nicky Minaj and others, who celebrate their ample backsides and have been responsible for shifting the male gaze downward.

Minaj’s big 2014 hit, “Anaconda,” was an homage to Sir Mix-a-Lot’s 1992 hit “Baby Got Back,” and borrowed his famous line “Oh my gosh, look at her butt.” The choreography of the “Anaconda” music video, which has been viewed 679 million times, relied heavily on iterations of twerking. (Remember the twerking craze of 2013?)

“The booty beauty standard has definitely changed over the decades,” Tyree said. “There’s no question that ample derrieres are definitely having a moment.”

True. When was the last time you heard a woman ask if her butt looks big in these pants?

This evolving aesthetic dovetails with what Tyree calls the “body positivity movement” that urges women to find peace with themselves. That push has led to advertising efforts such as the “Real Beauty” campaign for Dove soap that featured women of all colors, sizes and shapes in their undies.

Dove was knocked for co-opting feminist ideology to achieve commercial goals, but I think anything that helps women feel better about how they look is a step away from the tyranny of the thin ideal.

Eventually, the exposed butt cheek is going to be as passé as the ubiquitous cutout “cold shoulder” tops that hit their peak last summer.

Women, presumably wearing something fashionably long and baggy, will look back at their teensy shorts with the 1.75-inch inseams and wonder, “What the heck was I thinking?”