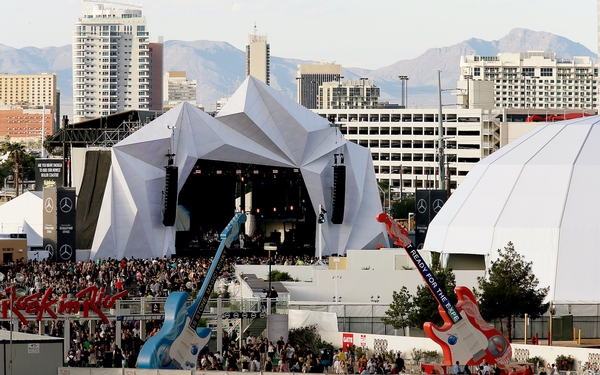 Music fans stream into the City of Rock for the last day of Rock in Rio in Las Vegas on May 16, 2015. (Luis Sinco/Los Angeles Times/TNS)

The American live music scene has become a culture of super festivals. Beyond the massively successful Coachella, Lollapalooza and Bonnaroo, the last two decades have seen a tremendous expansion of events that draw thousands of fans and boast multiple stages with city-sized artworks.

Now some believe that bigger is no longer better. After years of expansive growth, some promoters are starting to think smaller, tailoring their offerings to specific audiences.

This past Saturday, Pasadena’s first Arroyo Seco Weekend paired the likes of Tom Petty with high-end food and kid-focused activities. And in a move reflective of widening festival demographics, parents are encouraged to bring their “tiniest tots.”

That refined focus is no accident. After high-profile blunders this year, including the collapse of the Fyre Festival in the Bahamas and the Pemberton Music Festival in Vancouver, British Columbia, some promoters are reassessing the demand for — and their ability to execute — new mega-events on the scale of Coachella.

“We’ve learned a lot about how expectations are so important. If we want to be here in Year 5, we can’t over-promise,” said Nic Adler of AEG Presents-owned promoter Goldenvoice, whose Arroyo Seco Weekend festival debuted with headline sets from Gen X-friendly acts including Petty, the Alabama Shakes and Mumford & Sons.

“We want to under-promise and over-deliver. I don’t feel like any promoter today should ever feel like ‘I’ve got this.’”

Over the last 15 years, the festival economy has grown dramatically; according to a 2015 Nielsen Music survey, 32 million people attend at least one music festival in the U.S. each year (nearly half are in the coveted millennial demographic). On average, those who attend a festival spend more on live concerts, digital music and streaming subscriptions than the general population.

Promoters remain eager to tap into that growth with new events, but there are signs of oversaturation.

Rock in Rio USA, which made its North America debut in spring 2015, was supposed to return this year to MGM Resorts’ Las Vegas Festival Grounds, but the festival’s site remains empty, and organizers have yet to discuss a return.

“They procured a great event, but they spent too much money,” said Chris Baldizan, senior vice president of entertainment for MGM Resorts International, owner of the open-air venue that hosted the festival, “(and) their expenses grossly outweighed their revenues.”

Rock in Rio USA’s quiet disappearance is just one example of the challenges associated with executing multi-day destination festivals amid a crowded marketplace, its abandoned grounds signaling a need for a correction.

“Each year we seem to be adding more and more festivals, and the pool of talent to headline or play isn’t growing anywhere near as fast as the number of events,” said Gary Bongiovanni, editor of Pollstar, the concert industry-tracking publication.

“These festivals are all talent magnets, and it’s not like they are looking for one or two acts — it’s 50 acts or more that play these festivals, and they are in demand worldwide. Everybody is chasing the same acts.”

Typically when a festival flops, promoters quietly reassess strategy. Others decide not to return altogether, which is what Made in America did after one year at Los Angeles’ City Hall-adjacent Grand Park.

Fyre Festival was hyped as “the cultural experience of the decade” with two weekends of music on a luxurious private island, $1 million in prizes for its guests, a splashy promotional campaign featuring supermodels and packages costing up to $250,000.

Poor planning by organizers left the event in shambles during its first hours as guests arrived to unbuilt tents, trash-filled grounds, food better suited to sleep-away camp and the cancellation of music acts.

More than a dozen lawsuits alleging fraud, breach of contact and more have been filed as ticket-holders await refunds that have yet to arrive. Federal authorities are reportedly investigating the festival’s promoters for possible mail, wire and securities fraud.

The Fyre fiasco hadn’t even fallen out of the news cycle when the Pemberton event went bust.

Planned for two days in July in the mountains of Canada, with Chance the Rapper, Haim and A Tribe Called Quest, the festival (revived in 2014 after a previously failed run) was abruptly canceled after promoters declared bankruptcy.

Ticket-holders were informed via a notice posted on the festival’s site that they would not be offered refunds and instructed to “file a proof of claim form as an unsecured creditor.”

“One was absolute complete incompetence and the other was shaky finances and dubious morals on the people putting it together,” Bongiovanni said.

In Southern California, the festival business has boomed, specifically through Goldenvoice-promoted festivals aimed at precise audiences. Coachella continues to dominate, July’s FYF Fest in Exposition Park has expanded to three days and Tyler, the Creator’s quirky Camp Flog Gnaw Carnival, also in Exposition Park, will return for a sixth year.

Boasting the Rolling Stones, Paul McCartney, Roger Waters and more, Desert Trip was seen as validating the idea that fests could target a boomer market. Next month Fleetwood Mac, Steely Dan, the Eagles and more will appear at Live Nation’s Classic West at Dodger Stadium.

But even the largest promoters have made moves to scale back. The EDM-focused Electric Daisy Carnival drew an estimated 400,000 to the Las Vegas Motor Speedway over three days last weekend. Yet promoters Insomniac canceled the New York edition of the festival in 2017.

And, increasingly, new festivals are relying on unique locations or niches, which could prove more compelling than plug-and-play sites with lineups similar to Coachella or Bonnaroo in Manchester, Tenn.

Zach Tetreault is a founder of Form Arcosanti, a small festival on an experimental architecture site in in the Arizona desert that attracted major headliners including Solange and Skrill-ex.

“We keep capacity at 1,500, which at Arcosanti feels busy and vibrant without being claustrophobic and overwhelming,” he said. “Intimacy and inclusivity are major factors in making Form so special.”

Other fests, like BET Experience, are looking to the recent wave of liberal activism to energize their audiences. It isn’t the only one.

Dede Flemming, co-founder of the Central Coast’s Lightning in a Bottle Festival, said that his event “started as a fantasy land, and we always tried to steer clear of politics. But as we grew as people, lots of fans started to look up to us and trust us to push their beliefs.”

The fest’s new political and social-justice workshops this year were “really highly attended, I think people were really receptive,” he added.

For now, new festivals like Arroyo Seco may have to take a longer view about building a popular, sustainable brand. For Arroyo Seco, that means creating an event that Adler said would have a reputation for its “kid-friendly, family theme.”

“We came in as the guys from Coachella, this big fest that’s larger than life,” Adler said. “The pace of this festival will be really different.”