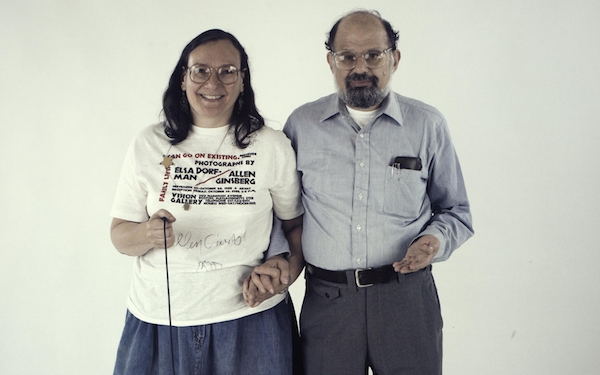 If you find yourself in front of her camera, poised and ready with the perfect get-up, the flawless pocket-square, and that seamless coif, she’s not really interested. I mean, not in any judgemental way, to be sure, but in the way of what sways her when she captures a photograph. Those strides for exactness in an image are inconsequential in the grand scheme of things, because, really, perfection is not what happens in a moment. She wants you. You with your blinks, glances to the loved one next to you, fits of laughter, or sneezing. You fixing that stray hair. These imperfections are unwanted by the clients, and yet for portrait photographer Elsa Dorfman, these “b-sides” mean everything.

Documentarian Errol Morris (The Fog of War, The Thin Blue Line) is here to show us how Dorfman came to have a keen understanding for the happening of a moment with The B-Side: Elsa Dorfman’s Portrait Photography, a gentle, yet enriching tour of one woman’s work since the very beginning of her career in the 1960s when she was first handed a Hasselblad.

That’s because prior to this moment, Dorfman had no inclination towards pursuing photography. Working as a secretary at Grove Press, a strong player in the Beat publishing game in New York, she found herself surrounded by passionate young people looking to move culture by ways of words and art, and yet she didn’t know how to contribute and influence in a way that seemed so natural to others. It was this foundation of influential friends and colleagues that would years later put her in front of her own proverbial “Sword and the Stone,” giving her a camera and ending all questioning of her role in this particular movement.

Moving us through the decades of her work, Dorfman stands before us in her own dark room, rifling through long forgotten images of this era. All of the sudden, intimate snapshots of prolific beat poet Allen Ginsberg drinking coffee in her kitchen, or Bob Dylan tinkering on his guitar backstage between sets, start to flood every surface of her cramped work room as her witty and often melancholic storytelling lead us through the evolving of culture, deaths of loved ones, and advancements in photographic science as they ultimately change the path of her career.

Which leads us to the Polaroid Land, the portrait camera that Dorfman inevitably falls in love with soon after its release in 1976. Printing extremely large format vertical portraits (20 x 24 to be exact), layered with luscious saturated colors, and sporting some complicated mechanics to go along with it, this camera opened the door for Dorfman to explore a moment in an entirely new and intimate way—having clients come, sit ,and open themselves up to a process that took something more than intrigue; it called for patience and trust.

Let’s talk about trust a little bit more but in terms of the relationship between Dorfman and her documentarian Morris, who is known for his “Interrotron” method of interviewing in his films. Throughout his career of covering often dramatic and political narratives, he has his subjects look and speak directly into the camera instead at an off-screen Morris or person, which is a style that most documentaries take. It makes the statement urgent, it gives little escape to the person testifying. But he doesn’t do that with Elsa. Perhaps because she is a person who is so used to staring down the lens of a camera, both behind and in front, where he found she has nothing left to hide, no layers to strip down by that kind of pressure. The result is wonderfully relaxed, though does occasionally lag due to its leisurely pace, but that also makes us feel warmth and at-homeness that takes us all the way to the end, especially when she shows the sharp side of her wit that pushed her to be such a prolific artist of her time. It seems that the trust between Morris and Dorfman in The B-Side is silently understood, as two documentarians exchanging their respective images of and to each other.

Her closest relationships, especially with Ginsberg whom she remained close with and photographed till the end of his days, reflect that kind openness to more than flaw, but existence. An existence that is tender and worth remembering for what it was and continues to be. And yet, she acknowledges the capturing of an image is act lacking reality. She doesn't buy into the idea that a story is captured in that moment, for the moment stands alone away from any greater narrative.

Ultimately, there is a gratefulness to Dorfman’s voice that becomes so easy to get swept up in. Dorfman chooses to take about two pictures for each client in order to give them a choice. She understands why most people pick the one that looks the cleanest and most pristine. But as she shows us, flipping through the b-sides, all of which she kept throughout the years, she finds the true magic in our own imperfections. It’s like she loves these people, people who are often strangers, despite these blips of theirs that seem so big to us. She is happy to be the one to see that part of us, embrace that part of us, and in the end, thanks to Morris’ The B-Side, so are we.