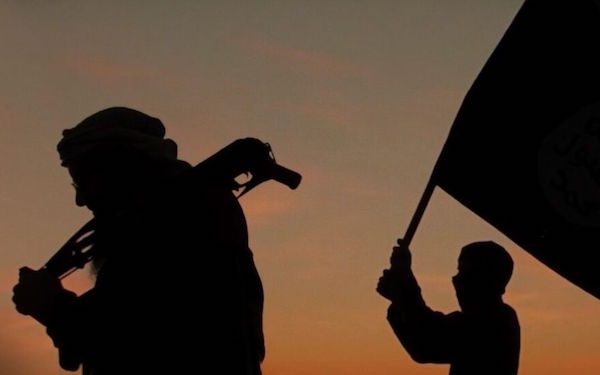 I’m writing this review from the comfort of a leather couch in an air-conditioned room in my West Hollywood apartment. My home is safe. It is untouched by hostility and war. It is utterly perfect in that sense. What I am about to write about are the people who haven’t had the chance to savor peace in years. The people of Raqqa, Syria are forced to stare evil, perhaps the greatest evil our modern world has faced, straight in the eyes as it rips everything from them. I thought this war of terror was far away from me, here in my exorbitantly easy existence, but because of acclaimed documentarian Matthew Heineman (Cartel Land) and the civilians who continue to resist the atrocities ISIS perpetrates on their city, we find that there is no unknowing. We must and will know what is at stake for our brothers and sisters in Raqqa.

The power of Heineman’s latest doc City of Ghosts lies in that very idea of knowledge itself. I want to avoid saying “knowledge is power” flippantly and without consideration, but for Heineman’s subject, that’s all they have. Focusing on the young men and women who comprise “Raqqa is Being Slaughtered Silently” (RBSS), a group of activists who secretly document, film, and publish on social media the brutal acts of violence ISIS inflicts on the citizens of Raqqa, City of Ghosts is Heineman pushing us into the warzone that stretches far beyond the borders of the Middle East.

But first a quick recap of the last few years. Understanding the complex civil war that’s still rippling through Syria is an arduous task, but if we can understand the concepts of power vacuums then maybe we can start to decipher how Raqqa became a taken city.

In late 2010, citizens of Syria began to stand up and voice their disapproval of president Bashar al-Assad, staging what were first peaceful protests, but that would soon escalate to something of violence, and which would later be deemed the Arab Spring. The clash between the military and rebels created a rift between these combatting forces, both sides able to win over certain cities, but neither taking the country in total. With several groups stepping up with wildly different takes on the future of Syria, the ensuing clashes led to the massive civil war the country continues to face today.

Raqqa, in 2013, was cleared of the government troops at the hands of militant groups like the Free Syrian Army and the Al-Nusra Front, leading to an eerie vacuum of power. The students who fought for freedom against al-Assad’s regime thought they were victorious in the brief interim between stakeholders of the city. But, without establishing a new sense of order in the aftermath, or organizing a system that could lead to a better future for Raqqa, in the early months of 2014, ISIL rolled into the city square and everything changed.

As you might’ve guessed, tragedy has since become a common occurrence in Raqqa. What’s more, ISIL quickly took control of all goods being consumed or sent over its borders, knowing that suffocating the access to information and to physical resources will be Raqqa’s surest defeat. That’s where RBSS comes in.

It may seem like a mouthful of a title to you, but “Raqqa is Being Slaughtered Silently” wants you to know exactly what’s happening so far away from you. While the group is comprised of dozens of Raqqa natives, few who are still in the city (whom we don’t get to meet for obvious reasons) and most who have fled to Europe, City of Ghosts focuses on the men who started the project: Aziz, Hamoud, Hussam, and Mohammad.

All strikingly young—none are younger than 35—these are the men who protested their government in the Arab Spring only to see a group founded on radical religious ideologies take its place and these are the men who refuse to leave their loved ones behind without a voice. Heineman takes it a step further by broadening their field of impact.

What you can expect is unimaginably hard-hitting footage coming from both the guys of RBSS and from Heineman—who is also cinematographer by the way. These guys are working around a totally overridden internet system from half-way across the world, talking to their “spies” with jail-broken phones as they try to get out as much information as possible on the latest air raids, casualties, and massacres. It is RBSS’s job to choreograph this whole exchange, and then to ultimately upload or publish whatever it is the insiders told them, all the while putting their aides, their families, and themselves entirely at risk. Because ISIL does not like anyone going behind their back.

And then we get Heineman watching these men who miraculously agree to be filmed in such an intimate way. While yes, it is great we are learning who these men and women are, this is also the best way for their enemies to gain crucial bits of intel on them. And you better believe we see some of the repercussions of that, and, to be frank, it’s bone-chilling stuff.

Which leads me to the point that City of Ghosts is not for the faint of heart. RBSS does not shy from the truth, so if that seems a little too intense for you, and understandably so, than maybe hold off until you're ready.

If you can though, try, and for this reason: in one of the most incredible scenes of the movie, which really is a testament for the greater goal of RBSS, the men come together after one of their beloved and admired leaders was assassinated in broad daylight in Turkey. What they say is, yes, our work is only increasing our likelihood of death. Yes, ISIL has sent us videos of our family being massacred to try to get us out of hiding. But no, we cannot stop. There is only room to get louder. This is where City of Ghosts turns into a story about brotherhood.

Much like in Cartel Land (2015), Heineman is relentless because, in both cases, these worlds never stop evolving in newer and uglier ways and so he must never fall back on his own heels. I’m not sure if there’s been a more powerful last image for a character in recent years than when Heineman shows Aziz, the 25-year-old who acts as spokesman for RBSS, curled up in his German apartment, thousands of miles away from Raqqa, falling asleep sitting up, as his body shakes with fear. He will never be safe, and he knows this. But, Aziz also knows and all volunteers of RBSS know that there will always be something worth fighting for as long as the voices in Raqqa keep calling out for help. With Heineman's help, more of us can finally start to listen.