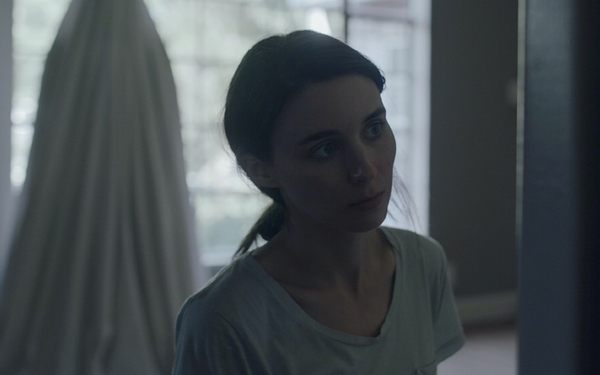 Rooney Mara and Casey Affleck in "A Ghost Story." (A24)

In an admiring appraisal of Peter Straub’s 1979 horror novel, “Ghost Story,” Stephen King once wrote, “We need ghost stories because we, in fact, are the ghosts. Is this really such a difficult or paradoxical idea when you consider how short our lives are in a wider life-scheme where redwoods live two thousand years and the Galapagos sea turtles may live for a thousand?”

King couldn’t have been writing about the similarly titled new film “A Ghost Story,” but he might as well have been. As spare and precise in its effects as Straub’s novel was lurid and extravagant, this latest feature written and directed by David Lowery (“Pete’s Dragon”) isn’t a horror story exactly, unless you count the horror of permanent solitude. Opening in domestic contentment, moving through personal anguish and ending with a cosmic lament, it’s a simple, wrenching story of love and loss that pries open a window onto eternity.

That sounds like a lot of thematic baggage for a movie that runs just shy of 90 minutes and plays out in long stretches of anxious, watchful silence. But one of the lessons of this quietly gripping movie, and of the American art-film tradition to which it belongs, is that stillness can conceal troubling depths, and even seemingly small moments can be rife with meaning and implication.

Much of the story unfolds in the rural Texas home of a young couple, unidentified by name or back story but invested with credible warmth and sensitivity by Casey Affleck and Rooney Mara. Our sense of intimacy with them is startling. Working with cinematographer Andrew Droz Palermo, Lowery films his characters in a nearly square frame whose rounded edges and muted colors evoke the look of old film footage — an evocative choice for what turns out to be a home movie in more ways than one.

One night the couple’s slumber is disturbed by the banging of keys on the piano in their living room, though a subsequent search reveals no sign of an intruder. Still, despite the reassuring tenderness of the scene that follows — a nearly five-minute shot of husband and wife back in bed, wrapped in a sleepy embrace — something vaguely sinister lingers in the air, as if they were being watched by an unseen, uninvited guest.

Within moments the man is dead, killed in an off-screen car accident — a shocking tragedy that gets an absurdist spin when he returns as a silent, slow-moving figure wearing a thick white sheet with two small eye-holes. Hiding your lead actor beneath a third-grader’s Halloween getup is a pretty risky conceit, but here it plays as both disarming and deeply amusing, not least because it supplies an utterly logical medical explanation for why a restless spirit might look like that in the first place.

The primitiveness of Affleck’s costume in some ways recalls the low-rent, matter-of-fact magic of the great Thai director Apichatpong Weerasethakul, whose films (including “Tropical Malady” and “Uncle Boonmee Who Can Recall His Past Lives”) often unfold along the porous boundaries between this world and the next. It’s not the only example of the film’s deadpan-prankster sensibility, as if Lowery and his two leads were trying to keep their experiment from becoming too lugubrious. One startling scene, in which Mara stress-eats an entire pie in one take, is like an Ingmar Bergman meltdown and a Bela Tarr parody rolled into one.

But in the end “A Ghost Story” is too patient, and too committed to its own idiosyncrasies, to seem anything but sincere. We follow this costume-shop apparition as he roams the grounds of his old home, bearing solemn witness to his partner’s unshakable sorrow. At times the film suggests a gender-swapped retelling of Orpheus and Eurydice: Although husband and wife are separated by death, they remain united by the extremity of their anguish, by the unwavering steadiness of the ghost’s gaze, and above all by the tight, box-like confines of the movie screen. (The barrier of a white sheet scarcely keeps Affleck and Mara from emoting even more affectingly here than they did in Lowery’s 2013 noir romance, “Ain’t Them Bodies Saints.”)

Individual moments are drawn out so slowly that you feel trapped in them alongside the characters, but what gives the film its particular poignancy is the way it makes those moments feel both attenuated and fleeting — a reminder of how little time we are granted together on this astral plane. Before long the woman leaves, and her husband is forced to look on helplessly as she is replaced by a steady stream of new occupants.

At times “A Ghost Story” flirts with the tried-and-true conventions of the haunted-house tale: The lights begin to flicker, books and knick-knacks fly off their shelves, and in time another ghost rears its white-sheeted head. But Lowery seems less interested in exploiting the trappings of horror than in using them to heighten his characters’ isolation. The house’s new occupants — including a philosophically inclined party guest (Will Oldham) who gets a soliloquy that accounts for maybe half the movie’s dialogue — exist less to be terrorized than to remind us that we are all, in the end, just passing through.

The astonishing narrative free-fall of the third act is best left for the viewer to discover. Suffice to say that time, if not space, turns weirdly elastic, and Daniel Hart’s moody score rises to an almost ecstatic level of doomy portent. Even still, we are reminded of happier days for this couple, in flashbacks (or are they flash-forwards?) that provide subtle clues as to the nature of our protagonist’s unfinished business.

These scenes are a warning to look closer and listen carefully, to appreciate the deeper meaning of moments that might otherwise seem insignificant — a lesson that applies well beyond the domain of the movie theater. If we in fact are the ghosts, as King suggested, then perhaps it’s best if we learn how to watch.