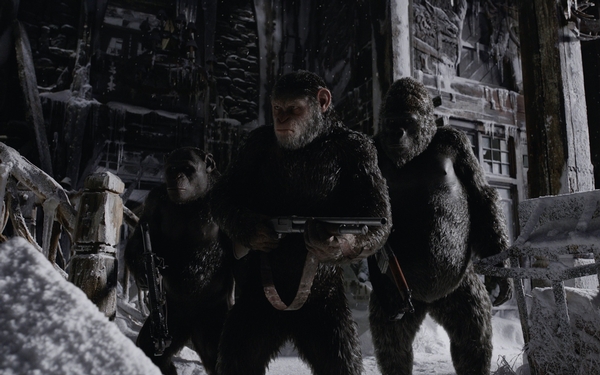 War for the Planet of the Apes (Fox Movies)

Director/co-writer Matt Reeves and writer Mark Bomback have reunited on “War for the Planet of the Apes” after collaborating on “Dawn,” and they’ve created a summer blockbuster that finds its power in restraint. The bombast here is emotional, not digital. As a war movie, it’s like smaller, more character-driven films, such as the 1956 Robert Bresson film “A Man Escaped,” or the 1938 Jean Renoir film “La Grande Illusion.” These are films that take place in the midst of a seemingly never-ending war, focusing on the individuals within war — the relationships forged and lives lost, the trauma and torture.

In “War,” the plot hinges not around huge battles, but spy missions, escape plans, secret tunnels, mind games and lucky breaks. Each death and every betrayal is deeply felt, and the film becomes a rumination on the psychological effects that war has on a soul after a prolonged experience.

At the center is one of the most unforgettable movie characters of recent years, Caesar, portrayed by Andy Serkis, an uncommonly intelligent ape (the result of lab experimentation), who becomes a noble, empathetic leader throughout the clashes between human and ape. Caesar is a true hero, a complex, deeply loving and loved individual, tormented by violence and unrest among his community and between apes and humans, and it’s easy to root for and admire him.

Here, he’s pitted against The Colonel, played by Woody Harrelson, and if Caesar is in “A Man Escaped,” Harrelson is planted firmly in “Apocalypse Now,” down to the black face paint and ‘70s rock (the film even has some fun with the reference, with “Ape-pocalypse Now” graffiti’d on tunnel walls). He’s a Colonel Kurtz type, a man who has spent too long in battle, the violence, paranoia and grief rotting his brain.

Bomback understands the power of efficiency in screenwriting. With ape characters who only have rudimentary speech, it doesn’t need to be a wordy screenplay. He works with character archetypes — the hero, the madman, the right-hand, the slave, the soldier, the innocent — but renders them all into rich characters in their own right, with individual histories, losses and triumphs.

In “War for the Planet of the Apes,” Reeves lets the film breathe, finding the time for moments to settle, characters to build, and proves the power to be found in the quiet. Michael Giacchino’s extraordinary score fills the space, keening sorrowfully, rumbling, soaring, beating. His excellent work stands out, but everything in “War for the Planet of the Apes,” from the performances, technology, and most importantly, characters and story, is of the highest standard. It’s a remarkable achievement, and nothing short of a miracle.

‘WAR FOR THE PLANET OF THE APES’

Rated PG-13 for sequences of sci-fi violence and action, thematic elements, and some disturbing images.