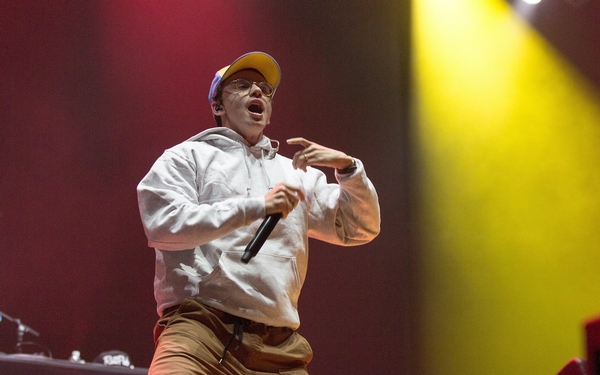 The 27-year-old rapper Logic knows he’s made it. His album “Everybody,” released in early May, debuted at No. 1 on the Billboard pop chart. His Tarzana house reflects the spoils that come with such success.

The home, complete with a pool, a basketball court, a recording studio and a skate ramp, is the young artist’s biggest purchase to date. Recently, he marveled at the acquisition, all while sitting in its adjacent guest house.

“The fact that this is my guest house is weird to me,” he says, relaxing on a plush couch that nearly envelops his wiry frame.

Born Sir Robert Bryson Hall II, Logic embodies the classic rags-to-riches tale. As the son of parents who struggled with addiction, he grew up poor in Gaithersburg, Md. As a teen, he discovered he had a gift for performance.

After releasing his first mixtape, “Young, Broke & Infamous,” in 2010, Logic honed his craft and slowly built up a cult following. Now he’s touring behind the topical and socially conscious “Everybody.”

Still, despite the trappings of mainstream success, he describes himself as a nerdy rapper whose mantra is “peace, love and positivity.” If one wants evidence of his geekiness, it should be noted that he can rap while solving a Rubik’s Cube, which he has done onstage.

Additionally, lining the walls of his guest home are dozens of custom pop-art paintings from some of his favorite shows, including “The Simpsons,” “Futurama” and “Bob’s Burgers.”

While his last album, 2015’s “The Incredible True Story,” payed homage to his love of science fiction and unfolded as a space odyssey, his latest, “Everybody,” marks a sharp turn for the rapper. The politically focused project features Logic’s signature rapid-fire flow on topics ranging from mental illness to mass shootings, mixed in with thoughtful personal interludes. There’s even a meditation on the afterlife with astrophysicist Neil deGrasse Tyson.

Such topicality on record came after a bit of online drama. After numerous recent reports of alleged police brutality against members of the black community, Logic, a biracial artist, was criticized on social media for keeping quiet.

His response? “I’m not going to hashtag it, talk about it on the Internet for it to live for two seconds. I’m going to make a whole … album so it lives forever,” he said after a conversation with rapper and activist Killer Mike compelled him to go deeper and instead explore more serious issues in his music.

While references to his heritage dot the album, Logic happily ticks off other topics he tackles on “Everybody” — homophobia, poverty, gang violence and our place in the universe. It’s a work heavily informed by his own experiences.

One song, the summer hit “1-800-273-8255,” which features pop singers Alessia Cara and Khalid, takes its name from the National Suicide Prevention Lifeline number. Another, “Anziety,” addresses a 2015 panic attack — and a battle with crippling anxiety — that led him to the hospital.

“Even right now I feel a little anxious,” he admits. Although he’s learned to manage his unease and has found self-acceptance, Logic is still in therapy, even pausing briefly during an interview to text his therapist.

“My whole life was about trying to be accepted by others and trying to be this guy in hip-hop and rap,” he says, “and now that I am, I realize it was never about that.”

It’s this openness and contemplation that’ve made him popular, says manager Chris Zarou. That includes use of social media to foster intimate fan interactions, which has helped build his career, instead of traditional means such as radio.

“He would sit there for hours and interact with these fans,” Zarou said.

And he still does. A sold-out May screening in Los Angeles of a documentary about the making of “Everybody” ended with the rapper taking time to answer question after question.

Still, Logic is ready to break free from just hip-hop. He recently revealed that his next album will be his last, at least as the Logic fans have come to know.

He’s working on a book, taking singing lessons and writing ballads, and he hopes to star in TV shows and movies. “There’s no reason I can’t be the next Mick Jagger, I can’t be the Elton John of this generation.”

After a brief tour of his home that includes introductions to his producers and personal chef, meeting his wife, singer Jessica Andrea, and dogs Fry and Panda, Logic pauses by a piano near his front door — he began taking lessons more than a month ago.

Asked to play a song, he sits down at the piano and adjusts his fingers, carefully matching them to the right keys. Although unsteady, it takes only five chords to recognize the tune, an ‘80s rock ballad and a fitting send-off from the man who believes you too can achieve your dreams — Journey’s “Don’t Stop Believin’.”