H.E.R. wants to remain a mystery, even in spotlight 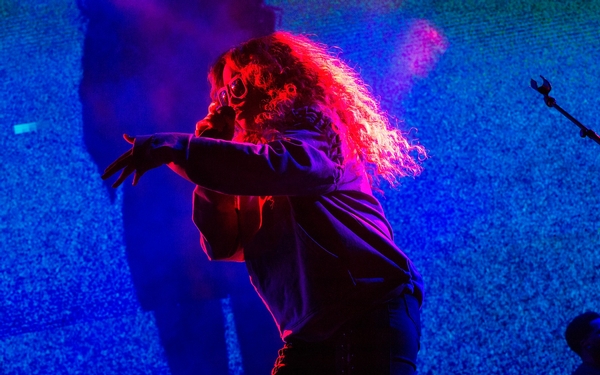 H.E.R. performs on the second night of the STAPLES Center Concert, presented by Coca-Cola, during the 2017 BET Experience at LA Live, June 23, 2017. (Ricardo DeAratanha/Los Angeles Times/TNS)

Inside a North Hollywood rehearsal space, musicians playing the drums, keyboards and harp compete with an industrial-sized floor fan attempting to bring relief from the 90-plus degree heat.

The only sound not being drowned out is the voice of H.E.R., the mysterious young R&B singer-songwriter who is seated on a wooden stool in the middle of the dimly lighted room.

She pushes her curly, shoulder-length light brown hair away from her eyes so she can see the band and give them the cue to begin playing her new single, “Every Kind of Way.”

“Baby, the sound of you, better than a harmony,” she sings, her voice stilling the room, lifting high about the grating hum of the fan.

Since making her debut last fall, the woman who goes by H.E.R. has gotten a great deal of acclaim for slow-burning, vulnerable records anchored by her velvety, rich voice.

And, as was no doubt her intention, there’s been just as much attention given to her anonymous persona — H.E.R. is an acronym for Having Everything Revealed.

Rumor assumed that she is, in fact, singer-songwriter Gabi Wilson, who landed a deal with RCA at the age of 14, but H.E.R. has never confirmed that, or ever sat for a face-to-face interview.

“Whether you know who I am or not, you don’t really know who I am,” she says during a break from a recent rehearsal.

Dressed in black, she’s curled up on a sofa inside a lounge in the studio. A handful of tattoos mark her fingers — the word “soulmate”; the name of a cousin who passed away; the outline of a pen — and though she’s bubbly and chatty, she’s guarded when questions turn to her identity.

When her record label, RCA, sent out an early stream of her first project — simply titled “H.E.R., Vol. 1” — to select music press last fall, there was a catch: The identity of the artist would remain secret.

Publicity stills didn’t show her face, there was no biographical information offered, she didn’t film music videos, and previously the singer agreed to only a few phone interviews.

She is 19, she says now, but beyond that she prefers the focus to be on the music, not herself, understandable given this social-media-driven era of oversharing. “I’m not going to confirm my identity,” she says, laughing.

That enigmatic approach isn’t new — the Weeknd, Sia and Dvsn have also chosen anonymity to an extent — but those around H.E.R. say it’s about giving her the freedom to create without having to deal with the pressures that come with navigating the music industry, and not a gimmick.

“Coming out in this kind of way has made her freer so that she can just concentrate on making music, and having people judge the music for what it is,” said Jeff Robinson, H.E.R.’s longtime manager. “She wanted to touch people without dealing with anything else.

“In today’s society too many people are caught up on the superficial,” Robinson continued. “‘What does she look like? How do they dress? Who are they friends with?’ It should be back to being about the music — like it used to be.”

The music quickly caught fire. H.E.R.’s debut project hit No. 1 on the iTunes R&B chart, has been streamed more than 12 million times on Soundcloud, and the singer is up to 1.6 million monthly listeners on Spotify without her music being pushed to radio.

Rihanna, Usher and Bryson Tiller are among her famous fans, and she even spawned a copycat act, with a male vocalist putting out a “response” EP under the name of H.I.M. that included a re-creation of the glowing silhouette she used for her cover art.

H.E.R., the concept, was birthed in the studio while the singer was in the throes of heartbreak over a toxic relationship, she said during an earlier interview (back when she wouldn’t show her face).

The singer set out to record a project that would be about coming of age, and her first EP is a brief, diaristic tracing of a broken relationship with songs that explore yearning, courtship, copulation, friction and conflict over dark soul grooves she wrote and produced in private before fleshing out with collaborators, including executive producer Darhyl “Hey DJ” Camper.

“She is the truest testament to what special is,” Camper said. “These days, words like ‘special,’ ‘rare,’ ‘classic’ are thrown around loosely, without proper validation. But H.E.R. is all of the above, and more.”

Earlier this month she released “H.E.R., Vol. 2,” another deeply intimate collection of confessionals.

“Everything was a lot more optimistic and a lot more fun. Still very vibey, still very emotional, but just in different ways,” she says of the inspiration behind the new music.

Though her performances at the BET Experience and the ASCAP Rhythm & Soul Music Awards marked her first public appearances, H.E.R. is a seasoned pro. A former child prodigy, she plays several instruments including the piano, drums, guitar and bass, was mentored by Alicia Keys, and has been recording music since she was at least 14.

“People think that she’s just this wavy stuff. They have no idea what she can do,” Robinson said of the singer’s music. “She grew up being that young girl at studio just watching and learning and picking up things. If you really listen to her music, you’ll hear Brandy riffs, Alicia’s passion, K. Michelle’s sass and Tiara Thomas’ street swagger because she’s been around all of them. She’s caught the perfect storm.”

It was a soulful cover of Drake’s “Jungle” first released in 2015 that made it easy to link H.E.R. to Wilson when the track appeared on her debut EP, and with the arrival of “Vol. 2,” H.E.R. wants to be seen as much as she’s been heard.

“This was the best way for me to present myself. A part of it (was) to get away from my past,” she acknowledges. “People are obviously going to see my face more, but I’m still H.E.R.”

The singer recently authorized director Sean Frank to build a short film, “Every Kind of Way,” around her music, and she’s eager to film her own visuals and work on a full-length album.

For now, though, she’s just taken aback by the attention her music has received.

“Being anonymous, I thought I’d just release the music and see what happens organically,” she says. “It hasn’t even been a year and everything is happening so fast. It was almost like I was forced to reveal myself — like, ‘OK, it’s time.’”