In Birthright: A War Story, the abortion debate isn't about abortion anymore 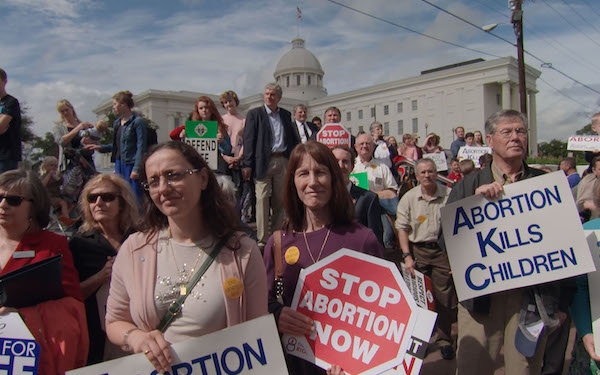 In the relatively short time that the United States has been around, ideological warfare has consistently tested the moral code that the country holds itself to. From Abolition all the way to the Gay Rights Movement, Americans have been fighting for what they believe in, and often winning in momentous ways; and yet, as history has taught us, sometimes winning isn’t enough. In Birthright: A War Story, director Civia Tamarkin explores how the debate on abortion rights has evolved post-Roe v. Wade from something political to something disturbingly personal.

To most people, there are two sides of the abortion rights battle, and how they exactly define themselves depends entirely on which side you ask: pro-life/anti-choice or pro-choice/anti-life. It’s a smart way for both sides to promote their agenda while diminishing the morality of the other with one single hyphen.

So, you may be asking, what’s new in the abortion debate? Why make a movie like Birthright when the fight seems rather black and white.

The answer is simply that the abortion debate is no longer about abortion, and Tamarkin shows that women, whether they are trying to start families or not, are the ones who have become casualties to the selfish and hypocritical politics that claim to be protecting and empowering them.

Since abortion was legalized in 1973, many communities split in an outcry of support or outrage, and what Tamarkin wants you to know is that conservative regulations that have been pushed since that pivotal case have been chipping away at the wider concept of women’s healthcare, far beyond the procedure of an abortion and the debates on what defines personhood. The dregs of the system are now reserved for women because sweeping policies are being passed that actively work against the health of the mother for the sake of no one but the politician who put the regulation in place.

We call abortion a hot-button issue because it is so incredibly divisive. Most people reading this will most likely have a pretty engaged opinion about what they deem constitutional, ethical, righteous, or logical. While categorizing your reasoning in one of these ways is totally fine, they are all rather contradictory to one another, which is why legislation passed on abortion has been woefully detrimental to the treatment of women in the healthcare system.

What Tamarkin does so effectively in Birthright is confront all of those corners of ideology, from the people who both oppose and support them. Policy makers, doctors, rights advocates, and victims alike all take the stage to frankly and emotionally voice their opinions.

The result isn’t a glossy production, which bodes well for the gravity of the debate’s discourse, and yet at moments, Tamarkin’s design occasionally detracts from the stories the women are actually telling.  The original score, while trying to be emotionally poignant, can become rather heavy-handed and seem almost patronizing as vignettes of women crying are overlaid on top of each other. That’s not to say Birthright isn’t a moving piece, but with a gentler hand on the editing side, the doc could’ve gone a long way in getting those messages across, because they really don’t need dramatizing at all.

Here are some snippets to prove just that: A woman who is pro-life but who, after having four children and facing increasing poverty, wanted to get her tubes tied, testifies to how the Catholic hospital she receives care from refused to perform the procedure because of their moral objections to sterilization, and through tears accepts that she will just have to keep having children. A woman with epilepsy who already once had a miscarriage because of her anti-seizure medication, decides to use marijuana to curb her seizures during her second pregnancy, and then gets arrested after giving birth when doctors perform an unauthorized drug test. A woman who is sent home to deal with her miscarriage because the doctors refuse to medically induce it until the mother is deemed sick enough to have to be treated.

It’s because of circumstances like these, where policies have taken priority over a woman’s critical health, that the United States holds the greatest rate of maternal deaths after birth. We can be thankful for filmmakers like Tamarkin who are willing to give us a history lesson that extends past radical ideologies and begs for humanistic regulation that even considers the women who are bearing the future inside them. While not as concisely put together as one could hope for when talking about such important subject matter, Birthright effectively implores audiences to consider how the policy makers on Capitol Hill and in local governments are both knowingly and unknowingly eroding women’s ability to survive on their own terms, and that is certainly a step in the right direction.

BIRTHRIGHT: A WAR STORY opens in New York at Village East Cinemas on July 14th and in Los Angeles at the Laemmle Music Hall on July 28th