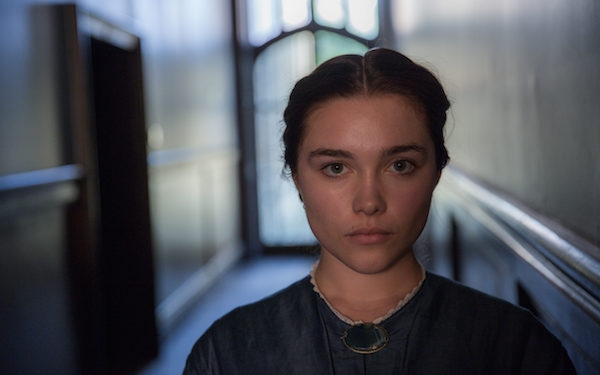 She comes in quietly. She comes in obediently. She sits down where she is supposed to and eats when he eats. The men talk as she stares ahead thinking of nothing or everything else. Her head nods as she slowly falls asleep at the dinner table. This isn’t her dinner table. This is his. A man she was sold to. A man she doesn’t love. A man who doesn’t have to live for much longer.  This will be her dinner table soon. For now, Lady Macbeth just has to be patient and wait, like a good little wife.

Okay, let’s back up a minute. This is not an adaptation of the popular Shakespeare character in the play that you are thinking of. No, here we are talking about the 1865 novella Lady Macbeth of the Mtsensk District written by Nikolai Leskov and published by Dostoyevsky in his acclaimed magazine Epoch. Here we have William Oldroyd, mostly known for his directing in theater, bringing it to the big screen in Lady Macbeth. In very precise and considered terms, his theater background, along with writer Alice Birch’s, is critical to much of the success of Lady Macbeth as a visually and emotionally forceful adaptation to a sweeping classic that apparently disturbed Stalin enough to have it banned in the 1930s.

As mentioned above, Katherine (Florence Pugh, The Falling) is sold to a man in a marriage deal, along with a plot of land and dowry. Being in the company of her new husband Alexander (Paul Hilton) and his father Boris (Christopher Fairbanks) isn’t exactly a romantic affair, as their cold glares constantly bore into her as if they expect her to spontaneously combust at any moment. She never does though. She remains silent and still, even on their wedding night when they are supposed to consummate their marriage, but Alexander merely turns his back to her after she’s undressed. Despite her love for the outdoors, her husband advises her to keep inside in order to stay away from any wandering thoughts she may have. That leaves her with the only other woman on the estate’s grounds, her maid Anna (Naomi Ackie), who dresses her sternly and feeds her when required.

The meaninglessness of her day-to-day existence starts to lift, however, when Alexander leaves to tend to business well off the estate grounds. Ignoring the will of her ever-watchful grandfather Boris, she finally takes walks for fresh air. This leads her to meet Sebastian (Cosmo Jarvis), one of her husband’s farmhands as he and his comrades lift up her maid Anna in a sheet and whack her with a stick as if she were a pig. As she demands Anna’s release, she hits Sebastian in what is her first release of passion in what feels like a lifetime of oppression. This will not be the last time she shares such physical space with Sebastian.

How Oldroyd’s take on the story goes is one of tension built on tension with little-to-no release, only redirection. If you think Lady Katherine will show Anna kindness and warmth after saving her from humiliation, think again. Anna becomes this plaything of Katherine’s. In fact, everyone becomes a pawn in her quest for power, all for what she believes is love.

While Lady Macbeth certainly isn’t dialogue heavy, writer Birch cleverly curates Katherine’s presence amongst the repeating environments she finds herself in, resounding beautifully in the screen image brought to you by cinematographer Ari Wegner. Whether it’s the staircase, the foyer, the dining room, or her bedroom, Katherine needs only to focus her gaze for us to understand her intention. Will she take an afternoon nap today? Wander outside, perhaps? Or will she murder someone else when the mood strikes?

With the teamwork of costume designer Shaheen Baig and production designer Jacqueline Abrahams, these rooms and these clothes that are originally not hers slowly become hers, just by the nature of her presence. Baig designs incredibly alluring, yet modest hoop-skirt dresses for Katherine’s 19th century look, while Abrahams creates spaces that are at once claustrophobic and bright.

How we follow Lady Katherine from space to space is what reflects Oldroyd and Birch’s theater backgrounds so greatly. We see these rooms from the same angle most of the time, as if they are sets that she revisits time and time again. Some scenes are strung together like different paintings that she happens to be walking through. This allows for her character to evolve and slowly unravel in her new freedoms without words and without grand gestures, only in movements.

The character of Katherine may sound… unreasonable. She’s unsympathetic to anyone else’s plights, even though she finds herself oppressed and restricted. She has few relatable characteristics at all, except for her desperate intention to escape her circumstances. That’s something we can all be absorbed in, even if we aren’t willing to murder for it.

That leads us to Lady Katherine herself, played remarkably by Florence Pugh, a relative newcomer who chills the camera with her beauty and betrays us all with her quiet malice. She is entirely unafraid to take up the entire frame with a dead stare or a lust for Sebastian’s body. At only 21-years-old, she is a wonderful surprise to such a solemn and wicked tale of empowerment in 1865.

And though it is her love affair with Sebastian that stands out at first as the titillating narrative arc, its Pugh and Ackie as Anna that truly make the tale urgent with tragedy and disgrace. Lucky for us, Anna’s character was entirely invented by Birch and Oldroyd, creating a wonderful foil for Katherine’s plummeting sense of morality. In the end, it was incredibly smart move, giving Katherine another antagonist that really is the only good-natured one on screen, and yet, do we hope Katherine wins? That’s for the most wicked of us to decide.