Kathryn Bigelow shoots the ‘67 war at home in ‘Detroit’ 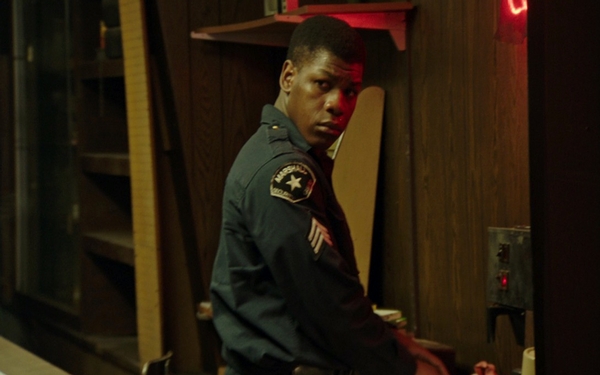 Oddly in synch with the narrative strategy (though without the imposing visual panache) of “Dunkirk,” the other historical drama of the moment, director Kathryn Bigelow’s “Detroit,” is an artfully frazzled mosaic of suffering, putting the audience through the wringer in the name of truth, injustice and what many see, still, as the American way with police brutality.

At its best the movie, written by Mark Boal, Bigelow’s collaborator on “The Hurt Locker” and “Zero Dark Thirty,” evokes a spirit of mournful provocation, as the bloody Detroit events of July 1967 unfold. There are significant limitations, however, with Bigelow’s latest film, and they prevent “Detroit” — a war chronicle no less than her masterworks “The Hurt Locker” and “Zero Dark Thirty” — from measuring up to those exceptional standards. In various, depressing ways, the film speaks to our present-day rage-fueled American divisions, clear echoes of where we were 50 years ago. Audiences are responding to “Dunkirk” because it’s a reassuring period piece, about grace under pressure and never giving up. “Detroit” is a tougher sell for a Friday night at the movies, because it’s about people who never had a chance at justice in the first place.

The events are well known in some circles, less so in others. On July 23, 1967, police raided an illegal after-hours bar (a “blind pig”) on Detroit’s Near West Side. This sparked riots that, as one character in the film notes, exceeded the destruction of the 1943 Detroit clashes between police and African-American citizens. In the movie Anthony Mackie plays a key supporting character, real-life Vietnam War veteran Robert Greene, caught up in the blind pig raid and the ensuing nightmare. He later described it as worse than anything he endured in Vietnam.

Some characters are pulled from the historical record; the key fictionalized character (for legal reasons), a venal, sociopathic police officer played by Will Poulter, is based on an officer found not guilty in court by an all-white jury. The excruciating centerpiece of “Detroit” concerns what happened at the Algiers Motel, an 11-dollar-a-night dive, home to hookers and johns and all kinds of transients. A group of officers, mistaking a starter’s pistol for sniper fire, turned against innocent suspects in a show of outlandish, illegal force. With the tacit cooperation of state police and the National Guard, the interrogation turned on a sick game of pretend-killings (pretend for a while, anyway) in a room adjoining the hallway where various, battered and abused suspects were being held while police searched for a sniper’s rifle that did not exist.

It’s one hell of a difficult sequence to endure. Bigelow does not elide or cut out anything for the sake of going easy on the audience. The film’s audience surrogate, who remains watchful on the margins of this long scene, is real-life security guard Melvin Dismukes, played by John Boyega of “Star Wars: The Force Awakens.” He’s a singular note of decency amid an indecently cruel scenario.

This protracted Algiers Motel nightmare, which recalls the urban warfare of “The Battle of Algiers” by more than name only, raises a question. Is there a way to dramatize a gut-grinding scene so that the audience stays rapt instead of checking out emotionally? Bigelow knows the answer is affirmative, but it’s extraordinarily tricky. Here she cannily cuts in and out of the scene for rhythmic variety, picking up other plot strands for a while, then returning.

But Poulter is miscast, and one-note, and it seriously hurts “Detroit.” As written and as acted, the vicious cop here called Krauss (whom we first see shooting a looter in the back) serves as the embodiment of all law enforcement evil, a scared, racist, paranoid bully acting with impunity, pulling his partners (one willing, the other reluctant) into the escalating carnage. Screenwriter Boal has done copious research and read through various accounts of the evening, as recalled by various parties, but the scene is missing something. What should be impossible to look away from grows too easy to tune out.

Bigelow and cinematographer Barry Ackroyd plow through “Detroit” with an aggressively destabilized camera, familiar if you’ve seen “The Hurt Locker” and, even more extreme in its hand-held, faux-war documentary tactic, “Captain Phillips,” both shot by Ackroyd. It’s the logical aesthetic choice, but by now the conventional one. Striking and vivid in short bursts and its accumulation of outrages, “Detroit” might’ve benefited from Bigelow working with a different director of photography, as well as a co-writer for Boal.

I watched “Detroit” with one eye on a movie yet to be made. If anyone is ever to take on a major piece of cinematic historical fiction dealing with Chicago in August 1968, Bigelow’s “Detroit” offers intriguing signposts about what might, and might not, work. A handful of films, from “The Battle of Algiers” to Paul Greengrass’ splendid “Bloody Sunday,” have met the challenge of dramatizing civil unrest and law enforcement outrages, memorably. “Detroit” comes close.