How Rotten Tomatoes became Hollywood’s most influential — and feared — website 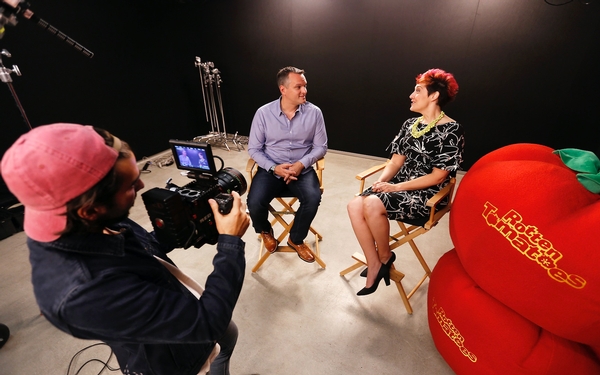 On a recent Wednesday morning, the staff of Rotten Tomatoes gathers in a Beverly Hills office, laptops open — steeling themselves for the next onslaught of reviews for Hollywood’s biggest upcoming movies.

“We just found out ‘War for the Planet of the Apes’ is certified,” she announces, as a couple dozen Rotten Tomatoes employees break out in applause.

That means the vast majority of critics liked the new 20th Century Fox movie — and the $150-million “Apes” sequel gets the official “certified fresh” label on the movie-rating web site.

Launched nearly two decades ago by a trio of UC Berkeley buddies, Rotten Tomatoes has become an increasingly influential — and feared — player in the film and television industry. Its scores can help determine whether movies sink or swim.

“It’s like the Good Housekeeping seal of approval for movies,” said Donna Gigliotti, producer of “Hidden Figures” and “Silver Linings Playbook” (both movies received a high 92 percent Tomatometer score). “For a picture that doesn’t have a brand name and doesn’t have movie stars, Rotten Tomatoes scores can enhance the box office.”

As people are bombarded with more and more entertainment options, quality has become a determining factor for a movie’s success. And moviegoers use Rotten Tomatoes to select films the same way they turn to Yelp to determine what restaurants they visit.

The trend has been a boon to Rotten Tomatoes. Thirty-six percent of U.S. moviegoers check the site’s reviews often before seeing a film, compared with 28 percent in 2014, according to box office tracking firm National Research Group. Nearly half of moviegoers aged 25 to 44 are regulars. The site scored 13.6 million U.S. visitors in May, up 32 percent from a year ago, according to data firm comScore.

Now, the company is developing a lineup of original online video series and growing a live event business. During the latest Comic-Con International, Rotten Tomatoes turned its “Your Opinion Sucks” live discussion panel into a three-day event with famous guests and a stage at the Omnia Nightclub in downtown San Diego. The panel may eventually become a touring show or online series.

With parent company Fandango, Rotten Tomatoes recently moved from West L.A. into a modern office space in Beverly Hills with open work areas, snacks and a spot for yoga and indoor hammocks.

The company has only 30 employees but its rising clout has caused growing anxiety in Hollywood during a bruising summer at the box office. Expensive movies including “Baywatch” and “The Mummy” failed spectacularly this summer, all of them slammed by critics (they received ratings of 19 percent and 15 percent, respectively). Movie ticket sales since the first weekend of May are down 7 percent compared with a year ago in the United States and Canada, according to comScore.

Decades ago, the only way to evaluate a movie before its release was to read reviews in major publications such as the New York Times, the New Yorker or the Los Angeles Times. Today, moviegoers rely on the Tomatometer, a number that shows what percentage of critics recommend the film. In Tomato-speak, a movie with mostly negative reviews is deemed “rotten” and tagged with a green splat. Movies that are mostly well-reviewed get a “fresh” red tomato.

It’s no coincidence that the few breakout hits of the summer box office all have scores of 80 percent or higher — “Wonder Woman” (92 percent), “Guardians of the Galaxy Vol. 2” (81 percent) and “Spider-Man: Homecoming” (92 percent). For smaller movies like “Baby Driver” (94 percent) and “The Big Sick,” (97 percent) a critical mass of acclaim can give a film much-needed attention.

And for lesser films, a very low score can be fatal. Hollywood used to be able to get away with putting out mediocre movies, because it took at least a weekend for the negative audience reaction to get out. Today, thanks to Rotten Tomatoes, amplified by social media, people can smell a flop long before its release. Movies that score lower than 30 percent, such as “King Arthur: Legend of the Sword” (28 percent) and “The House,” (17 percent) tend to fizzle at the multiplex.

“It’s the world we live in,” said Chris Aronson, head of domestic distribution at 20th Century Fox. “People don’t want to necessarily take the time to read a full review. They’d rather read the aggregate scores.”

Every day, a half-dozen Rotten Tomatoes staffers scour the Web to find every review of every movie, collecting from major news outlets and well-known critics. They read each review and determine whether it is mostly positive or mostly negative.

Often, it’s not obvious how a critic actually feels about a movie from the review.

An NPR review describes “Valerian and the City of a Thousand Planets” as “exuberant, extravagant, and generally likable,” but also says “sticklers for things like acting and dialogue are likely to be dissatisfied.” Is that a recommendation or not? How about when a supposedly fresh-labeled review from HeraldNet says, “The biggest problem, beyond the nonsensical storyline, is (Luc) Besson’s ear for English dialogue?” The Tomatometer score for “Valerian” is 56 percent as of this writing.

When the language is nebulous, the rest of the Rotten Tomatoes “curation team” reads it and makes a decision. If there’s no consensus, Rotten Tomatoes contacts the critic who wrote the review.

About half of the critics who appear on Rotten Tomatoes — often the more obscure set — submit their reviews, along with the ratings, to the site themselves. As reviews are indexed, Rotten Tomatoes calculates the score.

Occasionally, mistakes happen. Someone representing a major publication recently submitted a review of “Alien: Covenant” (71 percent) that was marked as “fresh,” but the Rotten Tomatoes staff thought it seemed “rotten.”

If 60 percent of a movie’s reviews are positive, it is considered “fresh”. If it’s below that threshold, it’s “rotten”. The true badge of honor — the ones studios reference in marketing campaigns — is a “certified fresh” badge, representing a score of 75 percent or better with a certain number of reviews counted.

Some detractors note that a “fresh” movie with a 61 percent rating probably isn’t much better than a “rotten” movie with a 59 percent score. They prefer Rotten Tomatoes’ biggest rival, CBS-owned Metacritic, which uses a weighted average of critics’ ratings and measures reviews on a scale of 1-to-100 before calculating scores.

Another complaint is that some of the critics Rotten Tomatoes uses are from obscure blogs and podcasts. Supporters, however, note that one or two marginal blogs probably don’t have much impact on the final score.

The sensitivity in the industry is understandable.

Rotten Tomatoes’ red-or-green assessments are a scary prospect for studios that regularly spend more than $350 million to make and market their would-be blockbusters. Studios can no longer rely on an expensive marketing blitz to achieve a certain level of sales during opening weekend. Nor can a studio hide the fact that its movie is bad by cherry-picking positive lines from individual reviews for their trailers and posters.

“It’s the dumbest complaint I’ve ever heard,” said Doug Creutz, media analyst for Cowen & Co. “‘How dare they point out ahead of time that a bad movie is bad?’”

Studios will occasionally call Rotten Tomatoes to say they misinterpreted a positive review as negative, or missed a reviewer who had nice things to say about a certain movie.

“Sometimes we get a ‘We think you misread this,’ and of course we’ll take a look, because it is sometimes subjective,” said Jeff Voris, vice president of Rotten Tomatoes, a former Disney employee who joined the company this year.

It’s a remarkable amount of attention for a company that started as a hobby. Martial arts film fan Senh Duong came up with the idea to put every movie review in one place after struggling to find Jackie Chan reviews online. He and two UC Berkeley buddies officially launched the site in 1998.

Since then, the site has undergone a series of ownership changes. The founders sold the company for an undisclosed amount in 2004 to IGN Entertainment, which was acquired by News Corp. for $650 million the following year. News Corp. sold Rotten Tomatoes to movie discovery startup Flixster in 2010, which was later bought by Warner Bros.

Fandango, a unit of Comcast Corp.’s NBCUniversal, bought Rotten Tomatoes and Flixster early last year for an undisclosed sum and incorporated its Tomatometer ratings into its ticket selling platform.

During its 19 years of existence, Rotten Tomatoes has expanded to include original content, offering rankings of superhero movies and horror flicks by Tomatometer rating and celebrity interviews. It also added TV reviews.

But prior owners struggled to grow the business, which generates revenue from advertising and by licensing its ratings and icons to digital video retailers including iTunes and pay-TV providers. Attempts to make its own shows for Current TV and Sirius XM fizzled. (Longtime editor-in-chief Matt Atchity recently left for online video company TYT Network.)

“We were a scrappy, wily can-do company,” said Grae Drake, the pink-haired senior editor who hosts the show “Your Opinion Sucks.” “What we’ve seen happen is, we’re now owned by a company that is invested in helping us grow more.”

Rotten Tomatoes hopes to produce more video and grow its live events operation. The company says it has half a dozen series in development. Its new Beverly Hills office, which it shares with Fandango, has spaces for shooting interviews and other shows.

The week before this year’s Comic-Con in San Diego, staffers gathered in a conference room at the Beverly Hills office to prepare for the company’s amped-up, three-day version of “Your Opinion Sucks,” a free live show where audience members debate controversial opinions about movies with critics. Senior production director Eileen Rivera displayed plans for the new stage, which resembled a cozy bar.

“When you’re talking about movies with groups of people, you’re at a bar, you’re at a restaurant, you’re hanging out,” she said to her colleagues.

The idea started a few years ago as a small Comic-Con panel, but has since grown to include social media interaction and filmmaker guests. During the show, which debuted at Comic-Con on Thursday, Rotten Tomatoes selects people from the audience to make counterintuitive cases for or against a movie (“The Godfather” wasn’t that great, for example), and a panel of film critics challenges the argument.

The goal is to get fans, who often disagree with the ratings, more engaged with Rotten Tomatoes.

“We were creating conversation in a way that was really rare,” Drake said in an interview. “We thought, well, everybody loves to argue.”