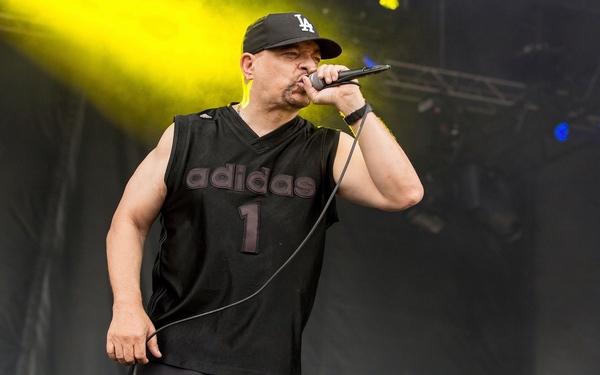 It wasn’t Ice-T’s intention, when he produced the 2012 documentary “Something for Nothing: The Art of Rap,” to return hip-hop’s most important old-school acts to the stage. But he couldn’t help noticing today’s biggest stars aren’t inviting Eric B and Rakim, EPMD and KRS-ONE to open for them at stadiums. So he put them together on the road.

“As much as I love the new artists, like Drake and everything, if EPMD has got to wait for Drake to call them, they’re not going to go on tour,” says the gangster-rap pioneer, who founded the Art of Rap tour and has performed on several dates. “We send these concerts out, and they’re always packed, and always so much fun. It’s needed.”

Ice-T has had a busy year: His thrash-metal band, Body Count, recently released its first album in three years, “Bloodlust,” and he’s preparing to star in his 19th season (the record is 21) on “Law & Order: Criminal Victims Unit.” The Art of Rap tours, which he created with East Coast manager Mickey Bentson, were unexpectedly successful. “Everybody comes back and says, ‘Man, you know, it was a great show,’” says the rapper born Tracy Marrow, by phone from his New Jersey home. “I’m kind of like (hard-rock singer and festival promoter) Perry Farrell to Lollapalooza — that was Perry’s idea, he launched it. Jane’s Addiction wasn’t on every tour, but they’re there in spirit.”

For Parrish Smith, the PMD in EPMD, the tour is a continuation of the 30-year-old Long Island, N.Y., duo’s longtime philosophy, expressed in classic album titles such as 1988’s “Strictly Business,” 1989’s “Unfinished Business” and so on. Smith and partner Erick Sermon met on the school bus in eighth grade, scored hits such as “You Gots to Chill,” and briefly became perhaps the most influential group in rap, copied and sampled over time by Geto Boys, Jay-Z and Digital Underground, among others.

The group broke up in 1992 and later reunited for good. “What I learned about the business is that it’s all business,” Smith says, by phone from his Long Island home. “It was business when EPMD existed and it’ll be business long when we’re gone.”

Smith, 49, switched to hip-hop after a successful football career — he played quarterback in high school and was a tight end at Southern Connecticut State University. He had six siblings and “a very serious mother and father” and gave up a potential pro career for music. “There was no plan,” he recalls. “My parents wanted to see some results. So I got ‘em.”

EPMD’s hits could be juvenile and obsessed with sex, but the rhymes and beats always clicked together as tightly as Legos. The band’s early career was a whirlwind — one day, Smith was seeing giant Run-D.M.C. posters everywhere, the next, he and Sermon were performing on the 1988 “Run’s House” tour with Public Enemy, DJ Jazzy Jeff and the Fresh Prince (Will Smith) and Stetsasonic. But it ended, at least at first, after a bizarre, unexplained incident in which burglars broke into Parrish Smith’s house. Police suggested Sermon may have had something to do with it, Smith believed them, at least for a while, and the rappers’ partnership turned acrimonious.

“You react emotionally, at first. Then I had time to process it (and) it really didn’t matter. We were already out of sync,” Smith recalls. “It was kind of like (an) emergency landing. You got the tailwind behind you, everything’s a go, the next thing you know, the whole dashboard’s lit up.”

Raekwon, along with his longtime Wu-Tang collaborator Ghostface Killah, is among the Art of Rap acts continuing to release groundbreaking new hip-hop albums. His recent “The Wild” is perhaps not as revolutionary as his 1995 solo debut “Only Built 4 Cuban Linx … ,” and it’s his first not to include other Wu alumni, particularly Ghostface. But it benefits from the more focused vision, particularly on the persistent and funky opener “This Is What It Comes Too” and the compact, Marvin Gaye-sampling music history lesson “Marvin.” The cartoon album cover, Raekwon explains in a phone interview, represents the music within — the rapper, gigantic with a gold microphone, looms over a festival of sharp-toothed animal-people, with crumbling buildings in a dystopian background. “I named it ‘The Wild’ because of a lot of things I’m seeing happen in the world today (are) also happening inside the music business,” he says.

But Ice-T, who invited Raekwon to participate in the documentary and later the tour, believes the business is becoming more favorable to old-school hip-hop tours. “People forget that when hip-hop first came (out), it was kind of a dangerous music, to go to the shows,” he says. “But now the violence (stuff) is over with the and the whole genre has grown and there’s a very positive energy.”