Public Enemy almost gets it right on ‘Desert’ 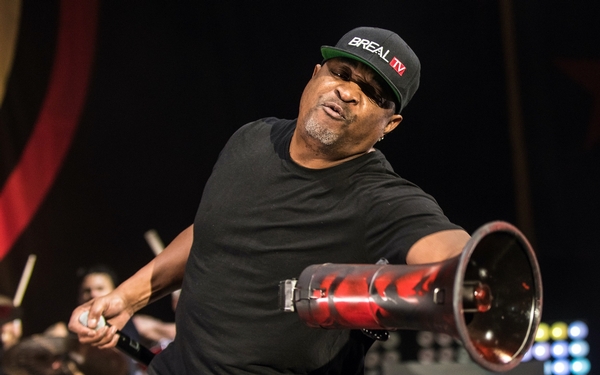 Chuck D of Prophets of Rage performs at the Shoreline Amphitheatre on Sept. 13, 2016 in Mountain View, Calif. (Chris Tuite/ImageSPACE/Sipa USA/TNS)

No comebacks allowed, no hiatuses needed. Public Enemy has been cranking out albums with regularity for 30 years, ever since breaking out with the agit-rap masterpieces “Yo! Bum Rush the Show” (1987) and “It Takes a Nation of Millions to Hold us Back” (1988). Besides breaking the invisible barrier for hip-hop longevity, Public Enemy has remained a vital touring group, notable for the power of its live performances at a time when many of its peers were still figuring out how to take their recordings to the stage.

A string of erratic self-released albums has lowered the band’s profile, but “Nothing is Quick in the Desert” — its 14th studio recording — flexes the group’s stadium-rap muscle. This was an album specifically designed to be played live, and some of the subtlety and nuance that informs Chuck D’s most incisive raps is missing. In that respect it’s a close cousin to Chuck D’s band with ex-Rage Against the Machine guitarist Tom Morello, Prophets of Rage.

The dense collage-style mixes of the Bomb Squad are gone, replaced by rap-rock arrangements that clear out plenty of room for guitars and drums instead of loops and samples: “If You Can’t Join ‘Em Beat ‘Em” boogies like a ‘70s hippie band, and guitarist Khari Wynn splatters notes across the bumper-sticker slogans of “sPEak!” and “Yesterday Man.”

The songs function as a critique of hip-hop’s evolution and the music industry, and PE sounds fed up. “Is rap still the black CNN?” they ask on “Yesterday Man.” “Can culture save humanity when the name of the game is narcissism?” they wonder on “Toxic.” At times, Chuck D sounds like the bitter old hip-hop head warning the Drakes and Kanyes of the world to get off his lawn. “Try to walk a mile in these old-school shoes,” he grumbles in “Sells Like Teens Hear It.” Millennials, don’t you know, are addicted to social media, according to “SOC MED Digital Heroin.”

Hip-hop is a young man’s game, but PE isn’t having it. In recent weeks, new works from graying rap royalty — “Nothing is Quick in the Desert” and Jay-Z’s “4:44” — have arrived to offer a wider-screen view of how to grow up within the genre. Jay-Z offered advice and perspective on family and business, the wealthy godfather showing some uncharacteristic vulnerability. In contrast, Chuck D plays the aging revolutionary, disturbed by the way the promise of hip-hop has been frittered away by a new generation of stars more interested in being “a spectacle instead of spectacular.”

Rather than fade away, he turns on that flamethrower voice and goes to work. In the extended eulogy that is “Rest in Beats Pts 1 & 2,” he offers a rap history lesson wrapped inside a political commentary. “The love for the art dipped in the dough,” he growls. “We lost real flows to mumbles and memes.” No one does cranky like Chuck D.

‘NOTHING IS QUICK IN THE DESERT’