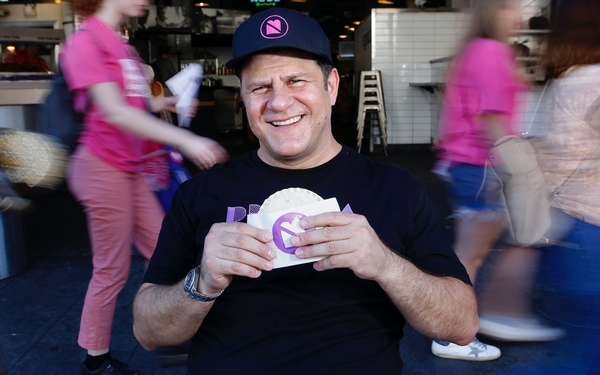 Adam Fleischman, the man who brought us the Umami Burger, is holding a peanut butter and jelly sandwich. It is not the PB&J of your cafeteria childhood, but rather an enclosed disk that looks remarkably like something from Area 51. The sandwich, and a fleet of others built and branded like them, is Fleischman’s latest project: a new empire of nostalgia-driven, high concept food that will, early next month, arrive in the form of a sleek sandwich stall in downtown Los Angeles’ Grand Central Market. First stop, the 100-year-old food court. Then, if all goes according to plan, the world.

That kind of hyperbole is normal in Fleischman’s realm, and given the wild success of the burger empire he founded in 2009 — a brand harnessed to a deeply addictive, absurdly flavor-jammed hamburger — it is hard not to play along. Fleishman’s talent is that of the pitchman, and what he slides across the counter is meant to be wrapped not just in paper but in comfort, convenience, even archetype. PBJ.LA, as the nascent sandwich business is called, is a branded delivery mechanism as much as it is a food stall.

“We’re trying to create disruptive products,” says Fleischman of the sandwiches, which are made from round bread, made for them by a local baker he won’t identify, and crimped in a machine that Fleishman is equally secretive about. The rounds of bread look like edible frisbees, the machine a bit like a giant lemon squeezer. What’s pressed inside the discs: house-made nut butters and jams, whose ingredients and flavor profiles fit nicely into today’s Southern California farm-to-table ethos. Jams made with rose and stone fruit; nut butters from pistachios and almonds. There’s espresso and organic chocolate, cashew butter and mango chutney, apple jam and Angostura bitters.

“Everyone has their memory of what it is; I think we’ve been able to elevate it and gourmet-ify it,” says Fleishman, your Marcel Proust moment via Don Draper.

The sandwiches, which come formed like saucers (“It’s kind of like a burrito, everything is locked in there.”) and packaged, in white and purple, to be packed or ported, are meant to be simultaneously nostalgic and forward-leaning. If this sounds familiar, that’s because it is. The formula is familiar: Fleishman wants to reinvent PB&J the way he did the hamburger, to rewire and rebrand a basic comfort food. In this case, the mechanism is familiar too: Anybody remember Hot Pockets?

Fleishman’s history of big ideas does not just include the hamburger. In addition to Umami Burger, currently 26 restaurants and counting (Fleischman partnered with Sam Nazarian’s sbe group in 2011), there is the pizza empire. Fleischman co-founded the pizza chain 800 Degrees — part of the new wave of ingredient-driven, fast casual restaurants when it opened in 2010 — which now includes 16 restaurants, both in and outside of the U.S. And then there was ChocoChicken, Fleishman’s chocolate-and-fried-chicken project, which debuted to mixed reviews in 2014 and has since closed. (Fleishman told me yesterday that he’s reviving the project and hopes to reopen the restaurant next year.)

PBJ.LA is still only one stall, as yet unopened. And Fleishman’s partners in the project are three guys he met at a gym. Fleishman, who likes origin myths (the original Umami Burger was invented, according to Fleishman and the world, one day in his kitchen), says that PBJ.LA happened after he met Payvand Salehi, Brad Greenberg and Jimmy Franklin at Sky Sport and Spa in Beverly Hills a few years ago, at a training session. That none of the men had much of a culinary history wasn’t apparently considered much of an issue — Fleishman has a BA in Liberal Arts from the University of Maryland and worked in finance and wine before opening the L.A. wine bars BottleRock and Vinoteque, selling those and using the money to open Umami Burger.

The four men loved the idea of recalibrating the old school sandwich, and eventually Fleischman took the idea to the folks at Grand Central Market.