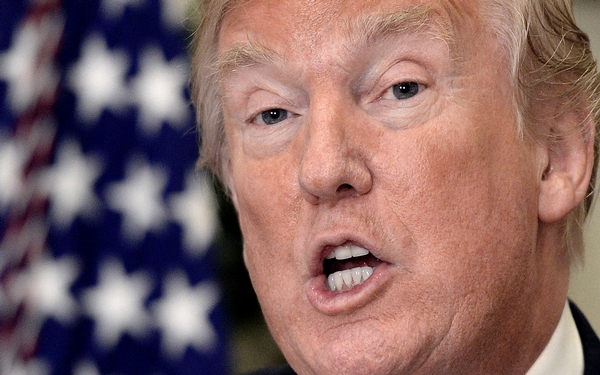 President Donald Trump has vowed to “let Obamacare fail,” after legislative efforts to undo the Affordable Care Act have stalled.

He and congressional Republicans have repeatedly portrayed the Affordable Care Act insurance marketplaces, also known as exchanges, as being in a “death spiral.” But independent analyses have concluded that such spontaneous disintegration isn’t happening.

In a number of ways, the Trump administration’s policies are pushing Obamacare into the vortex.

Reports from Standard & Poor’s, the Congressional Budget Office and the Kaiser Family Foundation all suggest that the exchanges — where people can shop for coverage, often with the help of a government subsidy — are stabilizing. (Kaiser Health News is an editorially independent program of the foundation.)

But, like every piece of legislation, Obamacare faces a difficult political reality: Its marketplaces require active maintenance and federal support.

The White House can take a number of behind-the-scenes steps to sabotage the exchanges and hasten their undoing. Already, it’s deploying some of those tactics.

“The administration has a lot of power to undermine the markets and make them dysfunctional,” said Sabrina Corlette, a research professor at Georgetown University’s Center on Health Insurance Reforms, who specializes in private insurance markets.

Here’s a look at five ways the White House is already working to weaken the health law, and what that means for consumers.

Under the ACA, when someone’s income falls between 100 and 250 percent of the federal poverty level — up to about $29,000 for an individual or around $61,000 for a family of four — marketplace carriers must offer a plan with “cost-sharing reductions” (CSRs) that reduce consumers’ out-of-pocket expenses.

Reducing cost-sharing — generally copayments and deductibles — makes plans more expensive for the insurers. The Obama administration used its rule-making power to set up direct payments to carriers to help offset this burden. The Trump White House has inherited that responsibility but also has the power to end the payment program.

The nonpartisan Congressional Budget Office estimated CSR subsidies in 2017 would total about $7 billion. Without that money, analysts say, more insurers might choose to exit, limiting options for consumers, and letting the insurers who remain charge higher prices.

Trump has been committedly noncommittal, publicly indicating he would like to halt the subsidies, but so far — on a month-to-month basis — letting them continue.

The uncertainty makes insurance companies skittish about participating, analysts noted. It’s also one reason some plans say they have had to increase their rates, noted Charles Gaba, a Michigan-based blogger who tracks ACA sign-ups. For instance: When filing plans for the 2018 marketplace, carriers on average raised premiums by about 34 percent — with about 20 points stemming from CSR uncertainty, Gaba said, based on an analysis of 21 states’ initial rate filings. Dropping the subsidies altogether would be even more damaging.

The White House has already signaled it does not want to enforce the individual mandate — the health law’s requirement that all people have coverage. And administration officials have repeated that position.

Meanwhile, in January, it issued an executive order that encouraged U.S. agencies to grant exemptions and waive or defer health law provisions that could put financial strain on companies or individuals — which could also be applied to the individual mandate.

For 2016 tax returns, though, the Internal Revenue Service continued to impose a financial penalty on people who didn’t have health insurance and who didn’t qualify for an exemption.

But enforcement may be waning. This year, the IRS was supposed to reject tax returns if people didn’t indicate whether they had coverage, flagging them for a potential penalty. Instead, it continued processing them, citing Trump’s executive order.

If the IRS has already processed any tax refunds for consumers, then they “don’t have much leverage” when attempting to collect the mandate fee, said Timothy Jost, emeritus law professor at Washington and Lee University in Virginia and an expert on health reform.

Enforcement of the mandate enforcement, economists note, is crucial to ensuring that enough healthy people buy coverage to balance the costs of sicker beneficiaries.

But even with the mandate in effect, the efforts to defang it bring confusion.

“A lot of people believe the Trump administration is not enforcing it,” Jost said.

As a result, healthy people may become less likely to buy insurance, even as sick ones continue seeking it. That means higher prices, and a shakier pool.

Skittishness on the part of insurers could lead them to drop out of some marketplaces, leaving consumers in some areas with few or no choices. Those “bare markets” are possible under even stable circumstances — and preventing them requires active federal involvement.

Under the Obama administration, high-level officials were “on the phone daily with insurance company executives … trying to get them to participate,” Corlette said. “It was very much an all-hands-on-deck, ‘we’re going to make it work for you guys’ kind of communication.”

And so far Trump’s Department of Health and Human Services doesn’t appear to be emphasizing this kind of essential outreach, both Corlette and Jost suggested. A few months ago, Kreidler agreed, HHS staffers appeared interested in helping states fill their bare counties — but that support has since dwindled.

“This may be sort of under the radar, but it can have real, lasting effects” for consumer choice, Corlette said.

All quiet on the enrollment front

The administration could further undermine the marketplace by dropping outreach to consumers. It’s already a shorter enrollment period this year — spanning six weeks instead of three months, from Nov. 1 to Dec. 15 — though that change was already slated to eventually take effect.

That shorter period means people may miss the memo on signing up — or at least need an extra push, Corlette said. And that’s another way the administration could undermine the marketplaces: simply choosing not to advertise them.

The administration also just stopped funding federal contractors that supported efforts by community groups and other organizations in some of the nation’s largest cities to sign up people.

Dropping advertising, shortening open enrollment or simply scaling back on technical maintenance for the marketplace website could all have significant impact, Corlette said. People who are sick and need insurance will likely seek it out, but those who are healthier — for whom health insurance is a less pressing priority — could miss the boat.

“Insurance is a product that needs to be sold,” he said. “If the insurers believe they’re not going to get any help at all in marketing their product,” he added, fewer will want to enter the marketplace.

HHS has taken an active role in criticizing the health law — pushing press releases and videos that argue it has helped more than hurt. That strategy could do a lot of harm, experts said.

If consumers keep hearing the law is failing, Jost noted, some will ultimately believe it, buying coverage only if they need it and thereby skewing the insurance risk pool.

Perceived hostility also has an effect on insurers, steering them away from marketplace participation.

“When you undermine confidence in the marketplace, you don’t need a Ph.D. in economics to know it’s not good long term,” Corlette said.