Columbus is an impressive, yet incomplete first go for dir. Kogonada 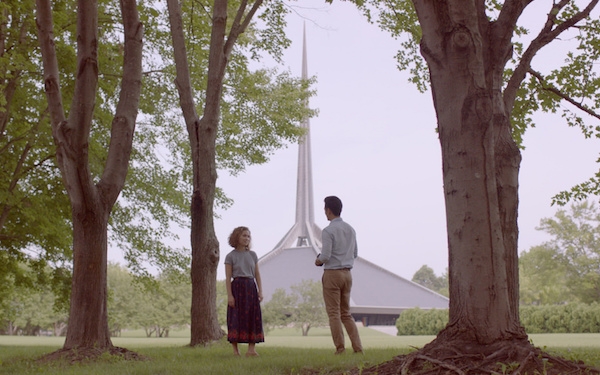 I think its safe to say that most of us move through our daily lives without thinking about the actual spaces we’re moving through. The physical, tangible environments that encompass us, however, affect us far beyond how they shelter us. As first-time director and writer Kogonada explores in Columbus, our personal histories and our emotions get tied up in the shape of the structures that we encounter, whether we are aware of them or not. Architecture, he believes, guides us through our evolving sense of self, both personally and as a culture. This idea he presents is a lovely, absorbing one. And yet, am I too greedy in asking for something more?

Truly, by all considerations, I wish there were only nice things to say about Columbus, but what is even truer is that I find myself guarded by a feeling of incompleteness. Kogonada introduces us to our lead Casey (Haley Lu Richardson, Split) as a 20-ish-year-old bookworm, working at the library in what we can assume is the city of Columbus, Indiana. Curious and wide-eyed, it seems paradoxical to those close to her that she recoils from the idea of leaving her hometown to pursue something more. But she likes it here, and the idea of leaving her mother and best friend (Michelle Forbes, True Blood) behind doesn’t sit well with her. If she looked just a little bit deeper, however, she’d find that the architecture of Columbus and the way in which modernism took over this quaint Midwestern town, has helped shape her sense of self. How could she part from that?

Just when we think she seems rather lonely for such a vibrant, bright woman, she meets Jin (John Cho, Star Trek), an out-of-towner who’s been beckoned to Columbus at the news of his father falling ill. His father also happens to be a leading scholar in architecture, and a hero of Casey’s. What’s even more intriguing to her though is that Jin has little-to-no interest in architecture, due to a tumultuous relationship with his dad, one that’s been dilapidating for years. Casey then takes it upon herself to show him the wonders of Columbus’ architecture and how it can actually have tremendous affect on emotional growth and, ultimately, strength.

Thematically and visually luscious, sculpted, yet fragile, Kogonada’s world is his own. Each frame is wonderfully fashioned to create ideals of space: a hotel room where we see the characters only through the myriad mirrors placed throughout the room or the library’s book stacks meticulously staged to resemble Casey’s sense of order. This structure brings her peace of mind.

Kogonada then shows u,s through many conversations between the bonding Casey and Jin, how each are respectively moved by architecture, or, more loosely, environment. This is where Columbus both gains momentums, and then, just as quickly, loses it in one fell swoop.

On numerous, frustrating occasions, Casey brings up wonderful questions of loyalty to space, to people. With a tough past behind her, one that binds her to her mother and the city, she tries to work through it by confiding in Jin. Jin then responds with phrases like, “Oh, that’s interesting,” or “Oh, really?,” both of which completely deflate the point of the conversation. Kogonada unfortunately gives Jin way too much passive dialogue throughout the film, preventing it from ever gaining emotional momentum it so deserves. These moments are also a disservice to John Cho, who has far greater abilities than what the script has given him. As a character and as a voice of Kogonada, Jin doesn’t nearly dive deep enough into his own dilemmas. With his father spending his last days in the hospital, Jin would rather be far from reach, far from facing the alienating emotions of estrangement. What could have been a rich exploration of what honor and family looks like when given a deadline, Jin’s character remains placid within the narrative, ultimately damaging the chemistry between Richardson and Cho, which ought to be the spirit of the film.

Speaking of Richardson, as a relatively fresh face on the film scene, she delivers some big impactful moments, especially near the end of the film as the idea of moving away from Columbus becomes more of a reality. The naivety of Casey’s situation comes across genuine and poised, and yet, it will be great to see her grow more as an actress, gaining confidence in front of the camera in quieter scenes.

So, when we pull back from the greater picture, not just focusing on Kogonada’s keen sense of color and framing, or evocative questions of emotional turmoil spurred on or quelled by the spaces in our lives, Columbus is still left feeling unripe and not quite ready for picking. It is easy to say, however, that with time Kogonada will have a lush future, and it’ll be a pleasure to watch him grow into it.