Shawn Mendes is an average teen and a full-fledged celebrity 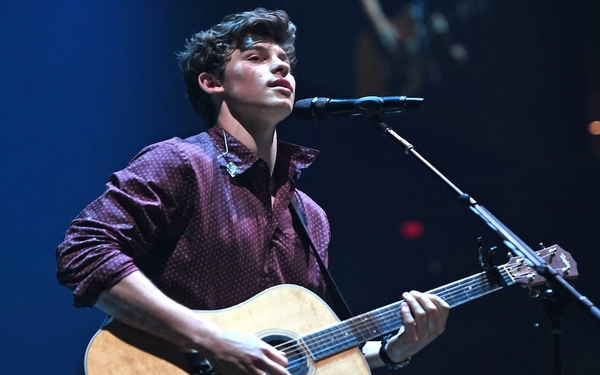 As with most teenagers, Shawn Mendes’ life seems to change every few months. His life just happens to be in a very bright spotlight. First, he was the new Justin Bieber. Then the anti-Bieber. Then the new Ed Sheeran. And now simply Shawn Mendes, pop star.

After learning to play guitar at age 13, putting clips on Vine months later, signing a record deal at 15 and landing two No. 1 albums by 18, Mendes is a full-fledged celebrity. He’s 6-foot-2 with wavy chocolate hair and a way with words that appeals to tween and teen girls. That could explain his social media followings: 23.6 million on Instagram and 11.5 million on Twitter.

Established stars have taken notice. Mendes counts John Mayer and Taylor Swift as friends. He previewed songs intended for his second album for Mayer, who offered feedback. Mendes opened concerts for Swift last year and she gave him the best advice ever, he told the British magazine NME in May.

“Taylor Swift said to me, ‘Don’t worry so much about messing up, because the people in the arena aren’t critics — you’re not on a singing show and they’re not here to judge you. They came tonight strictly to have fun and because they love to listen to the music, so if your voice cracks or if you mess up something on the guitar, it’s not going to bug them, it’s only going to bug you.’ That’s something I think about every night.”

No, Mendes is not the best singer in concert. His sometimes quivering, sometimes breathy voice cracks. But that adds to the vulnerability of his songs, many of which are about coping with lost love.

“Please have mercy on me,” he sings in the recent hit “Mercy.” “Take it easy on my heart. Even though you don’t mean to hurt me, You keep tearing me apart.” As the New York Times pointed out, women tend to have power in Mendes’ songs.

The lyrics on his sophomore album, “Illuminate,” released in September, are a leap forward from those on his 2015 puppy love debut, “Handwritten.” (“And now that I’m without your kisses, I’ll be needing stitches,” he moaned on “Stitches,” the big hit from his first album.)

“I’m just writing about what I’m going through,” Mendes told Rolling Stone last fall. “And (my fans) are growing with me and most of them are my age … I’m not just writing songs that are narrating my life, but everyone else around my age because they’re super-relatable.”

In a world of dominated by electronic beats, he emerged playing an acoustic guitar. Because that’s what his idol, Ed Sheeran, did.

Mendes grew up in Pickering, a suburb of Toronto, as “the most average kid ever.” He played soccer and hockey. Like many teens, he lived online, watching lots of YouTube.

He taught himself to play guitar by watching a how-to video. Like fellow Canadian Bieber, he began posting video clips of himself performing covers. Bieber favored YouTube while Mendes opted for Vine, which allows only six-second clips.

Then along came American music executive Andrew Gertler. He’d seen the duo A Great Big World perform “Say Something” on NBC’s “The Voice.” He was trying to find the clip on YouTube and instead stumbled across Mendes singing the same song. Gertler became Mendes’ manager and landed him a deal with Island Records. Buoyed by social media, the singer’s first single, “Life of the Party,” sold 150,000 copies in its first week. Not bad for a tune with no radio airplay.

Mendes is the unthreatening boy next door. And he knows it. “I’m proud to say I’m a role model for kids,” he told the New York Times last fall. “I’ve never had a scandal. But I don’t know if that’s so much because I’m perfect or because people aren’t caring enough yet. Give it some time. I’ll probably be very upset, but it’s part of the gig.”

Mendes plays it pretty PG in his songs, even on the more grown-up second album. “Lights On” promises to “love you with the lights on.” Is he talking about just making out or literally making love with the lights on? In “Bad Reputation,” he pledges to treat her right even though she’s got a bad reputation. “Patience” is about hooking up with an older women. Yes moms, he’s having sex.

“I’m releasing a song about sex at 18, which is appropriate,” he explained to the New York Times. “I wouldn’t have done it if I were 16 or 17. I’ll release a song about drinking at 21, you know what I mean?”

On “Illuminate,” Mendes worked with producer Jake Gosling, who helmed Sheeran’s first two albums and three One Direction projects. The results are more produced, such as the new single “There’s Nothing Holdin’ Me Back,” which evokes Justin Timberlake.

Despite the sonic update, the album has been embraced by fans. The record has yielded two blockbuster singles, “Treat You Better” and “Mercy,” which have topped 3 million and 2 million sales/streams/downloads respectively. And the current single has climbed to No. 8, giving him his third Top 10 hit.