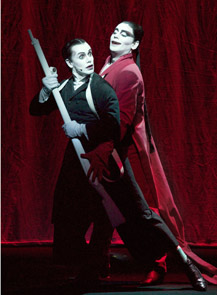 'The Black Rider: The Casting of the Magic Bullets' is a performance not to be missed by anyone who values truly creative, artistic and innovative theater. The show is written by the late William S. Burroughs (who is historically known for creating controversy with his fiction) with the direction, set and lighting done by Robert Wilson and the ingenious music created by the legendary Tom Waits.

The tale is about two young lovers who are forbidden to marry by the young woman‚s father. The father will only allow a hunter to marry his daughter and the young man is a clerk. To win the hand of his love the young man decides he will learn how to hunt. After hopeless failed attempts he has a run-in with the Devil who offers to provide him with magic bullets that will ensure he kills anything he hunts.

With his magic bullets the young man successfully hunts countless wild game and convinces his lover's father to allow them to wed. The father gives in on one condition; that on the day of their wedding the young man prove he is a true hunter by shooting and killing a dove.

Knowing he will only be able to complete this task with the help of a magic bullet the young man is forced to visit the Devil once again and beg for a bullet. The Devil provides the bullet but this time with a dark warning of payment due.

The story may be simplistic in nature but it gets complex fairly quickly onstage. This show is not for people who like meanings spelled out for them so they don‚t have to exert the energy to think. Rather, the show is open to interpretation and sparks intelligent conversation about what exactly Burroughs intended to get across.

The set design is stunning and inspired; a clever mix of German expressionism with bright carnival-like colors. The set pieces are sharp and awkward, and the characters‚ movements reflect those pieces. Everything about the appearances and behaviors is unnatural and abnormal. The set pieces and characters are intricately lit in a contrasting manner which changes abruptly and continuously throughout the show.

Waits creates an amazing collection of lyrics and song for the production. In true musical style the songs are very individual yet contain a common thread that weaves through each of them and makes for incredible fused climaxes. The songs are highly original and pure bliss for the ear.

Noteworthy performances are delivered by all the actors. Many of the songs require unthinkable vocal range that the performers pull off eloquently. Two of the evil characters have the especially difficult task of reaching the highest soprano to the bowels of the deepest tenor, both of them so impressive it was almost questionable whether they were male or female.

Each character resembles something out of Tod Browning's Freaks and collectively appears as an ensemble traveling circus of sorts. The players frequently portray their parts in the story through strange motion and interpretive dance.

It is clear that Burroughs certainly knew how to tap into his imagination and come up with some of the strangest things conceivable. So, what are you waiting for? GET UP AND GET OUT!