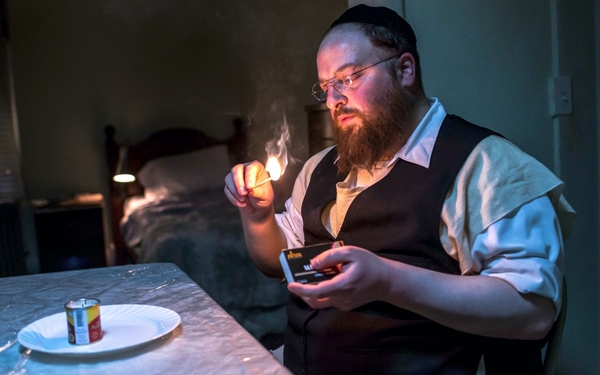 The mix of fiction and documentary that takes us inside a Hasidic community in Brooklyn in “Menashe” turns out to be something of a double-edged sword.

Director Joshua Z. Weinstein (a documentarian making his first drama) has said some of the footage was shot “secretly,” which raises issues of cultural appropriation the movie never really addresses, even as it moves us closer to the culture in question (the movie is almost entirely in Yiddish, with subtitles).

It stars Menashe Lustig, a Hasidic comedian and widower who no longer has custody of his son because the law and custom forbid children to be raised in a home without a mother — a situation that forms the spine of the story here.

Menashe loves his son (Ruben Niborski) and wants to raise him, but his refusal to seriously pursue a new wife and his failures as a breadwinner put that at risk. Menashe is a likable blunderer, but a blunderer nonetheless — he can barely hold down the cashier delivery job at the local convenience store, a job he owes to his brother-in-law.

His rabbi gives him two weeks to shape up, find a wife, or lose supervision of the boy. Decision day is to occur on the anniversary of his wife’s death, when Menashe is to host a ceremony in her honor.

The burly Lustig has a melancholy quality — he plays “himself” as a fellow with a good heart, but one who’s become a little too comfortable with failure. He is devoted to his son but lacks the discipline to make the choices that will allow him to be a better father.

For every loving gesture (using his last savings to buy his son a baby chick), there is a screw-up – leaving the back door open on his delivery truck, for instance, sending the day’s delivery out into the streets. Our hopes that Menashe will ace the memorial ceremony (and the “bachelor-proof” kugel recipe) are not high.

The movie was (apparently) shot guerrilla style by director Weinstein, though the filmmakers have been coy as to which scenes were captured stealthily and which are dramatized. This leads to questions about tact and voyeurism that go unanswered and frankly made me a little queasy.

And while the approach gives us rare insight into a closed-off community, it also appears to have limited Weinstein’s visual choices. If he’s not using a hidden camera, he’s imitating one, and the movie’s shaky/sneaky peering eye grows stale, even at 82 minutes.

This leads to an emotional distance as well — for all its insight into Hasidic life (the more you know, the more you’ll get out of the rituals and practices on view), it was the movie’s one non-Yiddish scene that hits home: Menashe in the storeroom at work, drinking 40-ounce beers with his Latino pals, a situation that somehow extracts from him a candor missing from his guarded interaction with Hasidic friends and relatives.

That’s part of Weinstein’s point. Menashe wants to be a good father and a devout man, but the world he values won’t let him be both.

Distributed by A24 Films.