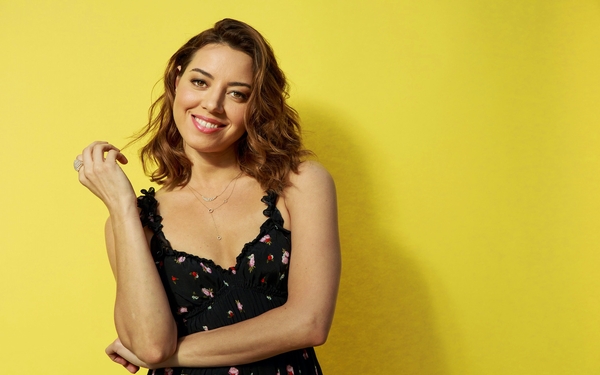 Just about every day now, Aubrey Plaza gets another eye-popping reminder of the timeliness of her new social-media satire, “Ingrid Goes West.”

The day we spoke, it was Sinéad O’Connor’s online monologue about her mental state — a post so startlingly similar to a scene in Ingrid it could have been an audition for the film.

“That was just awful, and you really have to feel for her. But it’s true, everywhere you look, there’s something that reminds you of our film,” said Plaza.

When she says “our film,” there’s a special pride of ownership.

Not only is Plaza earning praise for a challenging role — “Nobody plays ambivalence better, but she allows herself to be vulnerable here” Variety wrote – she produced the movie that is part of a purposeful evolution that has seen the onetime slacker figure take charge of her career in a very un-slacker way.

Though Plaza, now 33, often plays the role of a flake in public appearances, that drive has been there all along.

“It’s never good enough,” said Matt Spicer, who directed “Ingrid.” “As director, you’re like, ‘Aubrey, we got it.’ But her response is always, ‘No, please one more!’ And you don’t want to say no, because often the next take is even better.”

Her work ethic has taken her from supporting player (“Parks and Recreation”) to offbeat ingénue lead (“Life After Beth,” “Safety Not Guaranteed”), and now she’s finding and developing good roles for herself. It’s increasingly a dominant model in Hollywood. Women aren’t waiting for the right role. They’re making it happen.

“There are so many more opportunities, so many platforms and television channels, you can find a lot of interesting work, and women are definitely stepping up,” Plaza said.

She’s one of them. Plaza produced “The Little Hours,” released this summer, and found the experience transformative.

“It really opened my eyes to how impactful a producer is on the end product. And I always knew it was something I wanted to do more of — I went to film school (NYU), and have always been interested in the entire process.”

That intensified when she read Spicer’s script for “Ingrid” — the story of a mentally unstable young woman who moves to L.A. to indulge her obsessive interest in an Instagram star, played by Elizabeth Olsen. Plaza saw larger implications in the story. While Ingrid’s obsession is particular to the character, it will be familiar to a generation raised on social media — Plaza counts herself among them.

“We all have impulses like Ingrid. Sometimes we allow ourselves to get kind of lost in social media, to really go down that rabbit hole. I think it’s a very common experience. And that was part of the story — we wanted Ingrid to feel relatable. Even though she’s behaving badly and doing lots of questionable things, you want to root for her,” Plaza said.

Of course, the worse things go for Ingrid, the better the role becomes for Plaza, who has a chance to show more range, moving from comedy to extreme and authentic emotional distress. “I just couldn’t believe someone had written a role like this, it was so good, and something I felt I could really do well,” she said. “And as I’m reading it, I’m really seeing the whole bigger vision of what the movie could be.”

And Plaza had an in — she knew the guy who wrote it. Spicer was already an acquaintance in Hollywood.

“I honestly think there is a special familiarity that comes from being from near Philly. We’re kind of the same age. We both grew up outside the city, we both grew up loving movies, we both went to film school, we really hit if off,” she said.

Spicer said it helped having all these reference points in common, especially when it came to how they saw their fractured heroine. “I think Ingrid definitely has a personality disorder of some kind. She has that going on, and when she is confronted with social media, and has a device in her hands, it absolutely intensified her worst instincts.”

Spicer put it this way: “It’s like giving a baby a gun. It’s just the wrong tool for the wrong individual.”

Plaza talked about an article she’d just read in The Atlantic linking increased usage of social media with a decline in overall happiness, even deteriorating mental health.

She sees that at work in “Ingrid.”

“Social media can be depressing and confusing. It almost encourages delusional thinking, because often times what’s going on there is not real. For someone like Ingrid, that’s even more of a problem.”

What’s real for Plaza is her busy career — ongoing work on FX’s “Legion,” a starring lead opposite Jemaine Clement in the forthcoming comedy “An Evening with Beverly Luff Linn.”

And, who knows, maybe a stint behind the camera.

“Usually, an actor is focused on their individual contribution to the film. But from the first meeting, she was asking really smart questions about the entire production. Other characters that had nothing to do with Ingrid,” Spicer said. “How are you going to shoot it? What lens are you going to use? These are not normal actor questions. These are filmmaker questions. It wouldn’t surprise me at all if she ends up directing.”

Especially now that she’s fulfilled a career ambition — to play (or at least cosplay) Catwoman — thanks to one of the funnier scenes in “Ingrid,” opposite “Straight Outta Compton’s” O’Shea Jackson Jr.

“That’s right, yes,” said Plaza, finally surrendering to her inner imp. “I always wanted to be Michelle Pfeiffer. To crawl up on Michael Keaton, and lick his face.”