Beach Rats and the loneliness of teenage sexuality 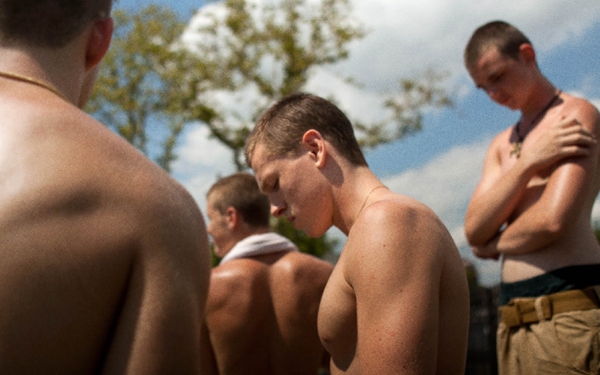 When you go out at night, do your parents know where you’re going? When you make plans with people other than your friends, do they know who you’re replacing them with? When you walk into a motel room with someone who’s not your girlfriend, does she understand why? If he’s lucky, Frankie will be able to tell those close to him why he needed these nights full of secrets and lies. If he’s lucky, they will understand. But this summer is too messy as it is to bring it up now. So Frankie will keep to his darkness as the long summer days tick by, and he will wait.

Director Eliza Hittman is relatively new on the scene, with one feature film previously under her belt, but also with a slew of shorts she’s directed over the years. With her second feature, Beach Rats, however, she’s found just the right sandbox for her to play in. While her film, which won her the award for Best Director at this year’s Sundance Film Festival, is set in the blistering heat of a New York summer, where people flee to the coastline in droves, the environment of her lead Frankie is of an entire different nature.

At home, things are claustrophobic and quiet. Frankie’s father lies in a hospice bed in their living room, fighting off a cancer that seems to already have won. The air in the house is constantly choked with the smoke of his mother’s cigarettes, while his younger sister revels in the new concepts of sexuality as her shirts get shorter and her boyfriends sneak in unannounced.

Meanwhile, Frankie, played by stunning newcomer Harris Dickinson, spends his days with his three best friends, all of whom look relatively the same with their shaved heads, shirtless bodies, and gold chains around their necks; typical teens trying to look harder than their maturity actually lends them. They steal his father’s prescriptions, salvage as much weed from their drawers as possible, all in the hopes of getting through the summer with just a bit more style. It’s when his friends leave and Frankie sneaks into his basement, his den, where we see him divert from the expectations of his friends and family.

As his computer turns on and the chat room window pops up, Frankie becomes shrouded in the darkness of his own doubts. The men on the screen even request for the beautiful young man to come into the light—they need a better look. As he takes off his low hat, and he smiles, we realize that these will be the only people Frankie will step out of the shadows for. Even Simone (Madeline Weinstein), a girl he meets at the boardwalk who is initially charmed by his stoic nature, his mystery, is kept at a distance when it comes to anything of emotional weight. Their relationship will always be measured on a need-to-know basis.

Hittman, along with her remarkable cinematographer Hélène Louvart (Pina), craft a visually somber, sexy, and textured idea of summer’s effect on the mind and body. The sweat and the sand provoke something sensuous in Beach Rats, as the boys dive into the shallow waves off the shore, or as they play handball in the steaming courts of Brooklyn. The framing of these young rambunctious teens, often layering them against each other, making them almost indistinguishable, tells us that while Frankie feels he is uniquely alien from his friends facing what it means to be gay, perhaps it is for the better. These boys look at each other with unease and fear, all hoping for the idea or the knowledge that will make them something more than just another beach rat.

While Hittman’s writing doesn’t quite match up with her emotive directing style, Dickinson often makes up for it by swinging from repression to explosion with impressive confidence. There is little doubt that we will see more of him in the years to come, as his face, his gaze are meant to be captured on screen. As he looks out over an overgrown maze of weeds, smoking a cigarette, he turns around to us with a beautiful uncertainty of what is to come. We all know this feeling.  He may reject the light and the sun, fearing it will unearth his true identity, but in Hittman’s Beach Rats, we are able to join in and witness his discoveries, however deep they may hide.

BEACH RATS opens on Friday, 8/25 in LA, NYC and Indiana.  There will be a Q&A with Director Eliza Hittman at the Arclight Hollywood on Friday following the 7:30 PM show. Sean Baker (Tangerine) will Moderate.  A Q&A with Eliza at the Landmark Sunshine in NYC will take place on Saturday, 8/26 after the 7:15 PM show.  Barry Jenkins (Moonlight) will moderate.  PURCHASE TICKETS HERE!