Powerful, yet not fully formed, Crown Heights is a hopeful take on a hopeless system 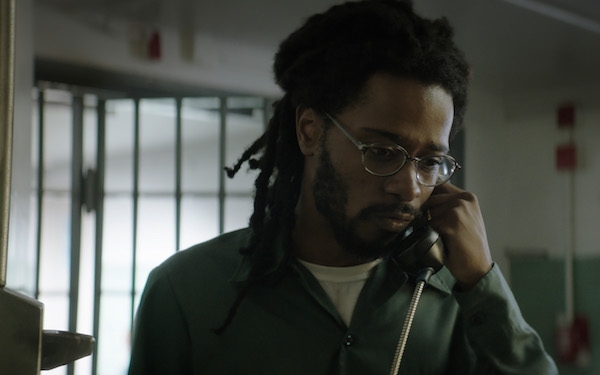 The story of Colin Warner is, unfortunately, not an uncommon one. A man is imprisoned for a crime he didn’t commit, and despite zero evidence proving him guilty, the judicial system treats him as such by putting him behind bars for 21 years. Thematically, we’ve seen this story before, and depending on how you look at it, that can be both a strength and a weakness for Matt Ruskin’s Crown Heights.

Warner’s case came to pop culture’s attention back in 2005 when the radio show This American Life aired an episode called “DIY.” The title refers to not Warner himself, but his best friend Carl “KC” King who, after watcgubg numerous lawyers fail to appropriately defend and clear Warner’s name, decides to take it upon himself. By raising funds for each new attorney, putting his own family’s financial means at stake, and even becoming a legal courier in order to learn the ins and outs of the judicial system, KC knew he had to do it himself if there was any hope of freeing Warner.

The crime in question is a murder that took place in Brooklyn in 1980, when violent crimes in New York were at a high. Warner, an 18-year-old Trinidadian-American living with his mother, works full-time at a garage and lays generally low in his spare time—that is when he’s not stealing the occasional car for an extra buck or two. His luck runs out, however, when cops track him down and arrest him for shooting a kid, whom he’s never seen, in broad daylight. The cops say there are witnesses. Bewildered and confused, Warner has no choice but to go to trial and try to get his story across. Unfortunately, the judicial system is set up to favor convicting anyone rather than no one, so despite the lack of evidence or motive connecting him to the murder, Warner is convicted to a minimum 15 years-to-life sentence.

Okay, he says, surely this is just a misunderstanding and given a little time someone will see that he’s an innocent man, right? Only if you consider 21 years a little time.

It’s not all too surprising that Crown Heights walked away with the Audience Award at this year’s Sundance Film Festival. Pulled along by a wonderful cast, especially Lakeith Stanfield as Colin Warner, the gravity of both Warner’s situation as well as the entire judicial system’s faults are put into personal, enraging terms. Stanfield, who has been taking all of his roles to a new level—especially in the FX hit Atlanta and the horror smash Get Out—proves that he has the capacity to take the spotlight and spin it into a chance of meaning and profundity. Additionally, the entire supporting cast elevates the weight of loyalty, guilt, and redemption in delicate forms, especially Nnamdi Asomugha as King and Natalie Paul as Warner’s confidante and partner, Antoinette.

Where the emotional heft of Ruskin’s story is strong, the structure and length ultimately hurts Crown Heights’ chances of standing out among other harrowing stories of wrongful incarceration. The film I kept thinking of while watching Warner’s story was Jim Sheridan’s In the Name of the Father (1993), another true story about a man being wrongfully imprisoned and serving far too much time as a result. I was wondering why that film, besides having Daniel Day-Lewis in the lead role, was so effective in its storytelling devices. It was urgency—that even though we saw over a decade of struggle, we still felt that each year added momentum to the next, rather than slowing it in its tracks. While Ruskin does a great job giving the years a feeling of breath and growth, they ultimately lose their modes of strength.

That being said, themes of family and connectivity beyond prison walls reach through the more timid moments on screen. Crown Heights is more than a prison story, it’s also one of immigration, history, and appreciation. Cinematographer Ben Kutchins (Ozark, Mozart in the Jungle) brings us close in on our characters, feeling the intimacy of prison, of their precarious relationships. Passage of time may not do the film justice, but it does emphasize the strength of the actors and our thirst for redemption. For some that may not be enough, but hopefully for others it will keep Warner’s story close to heart as justice continues to be tested day in and day out.