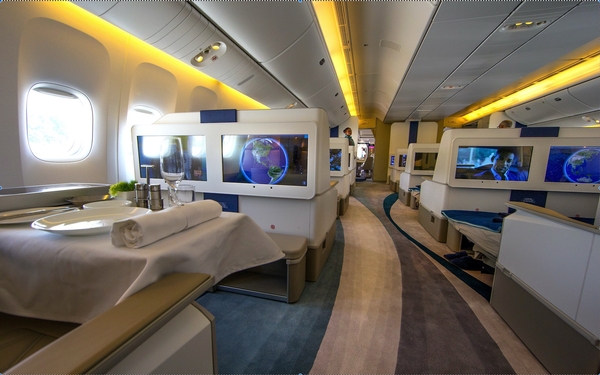 On commercial airlines today, traveling in coach is a pain, while the wealthy are well looked after in first class. But for the ultrawealthy, there’s a whole other level available.

For China’s “Golden Week” holiday at the beginning of October, a group of rich Asians will take off from Hong Kong on a lavishly appointed Boeing 777 for a nine-day tour with stops at luxury hotels in Nairobi, Kenya and Tahiti. The cost is $45,000 per person.

On Tuesday, that 777 was handed over to Crystal Air Cruises in a ceremony at Boeing Field.

It features a large cocktail-bar area, with seating for 24 guests to mix socially. To pass the time on a long flight, the tabletops in the bar can be inverted to offer video games or gaming.

A typical 777-200LR airliner like this one normally carries slightly more than 300 passengers, but aft of the bar on this jet is a passenger cabin with just 88 first-class, lie-flat seats.

After it was built in Boeing’s Everett factory, the plane spent two years at Moses Lake, where the customized interior — mostly white, with stone veneer and marble accents — designed by Greenpoint Technologies of Kirkland was installed under contract by a team from Aviation Technical Services, the Everett-based airplane maintenance company.

Rodriguez touted the jet as “the most luxuriously appointed aircraft in the private aircraft industry.”

Guests are cosseted by a crew of 20, including a chef, a sommelier, a mixologist and a dozen mostly young women whom Rodriguez insisted on calling butlers — “not flight attendants.”

Rodriguez took every opportunity to promote the Crystal name and its connotation of wealth and luxury.

“It’s my great Crystal pleasure,” she declared in a brief speech accepting the airplane. She said the 777 augments Crystal’s exceptional “lifestyle and hospitality brand portfolio.”

Explaining the business model behind the purchase of the luxury jet, Rodriguez said that initially Crystal intended to treat it like a cruise ship in the air, planning high-end itineraries and selling seats individually.

But the company discovered that though their target market, “the top 2 percent of the world’s wealthiest,” could afford such air cruises, they are too time-strapped to slot easily into a preset schedule. So Crystal switched gears to offer the jet instead as a private charter.

Rodriguez said one couple have just chartered the 777 for their anniversary, along with “one of our floating assets.”

A yacht? A river-cruise boat? She declined to elaborate further, saying her clients insist upon privacy. She disclosed only that the couple’s plan is “to take their guests on a custom-curated experience around the world.”

It’s also possible to just charter the plane on a private flight from city to city. Rodriguez said such a one-way flight from New York to Paris would cost $375,000, or just about $4,300 per person with all 88 seats filled.

Next month, the Vancouver Canucks National Hockey League team has chartered the plane for its trip to China, where the team plays the L.A. Kings in a couple of preseason exhibition games in Shanghai and Beijing.

“The world is getting wealthier by the minute,” Rodriguez said, citing data that China has “more than a million millionaires and more than 400 billionaires.”

And, boosting the private charter model, “a lot of the wealthy like to travel with, in quotes, people like them,” she said.

Crystal Air bought a 787 Dreamliner as well as the 777. But it decided that the smaller plane doesn’t suit its needs and is trying to sell it.

So what’s the likelihood of further Boeing orders later, perhaps a second 777?

The plane will be operated for Crystal by Comlux, a private air-charter company with operating certificates from Malta, Aruba and Kazakhstan.

The 777 will be based in Victorville, Calif., when in North America; in Malta when it’s in Europe; and in various bases in Asia.

The crew has been gathered mostly from the world’s high-end airlines. One Austrian pilot previously flew 777s for Emirates of Dubai. The South African executive chef was poached from Etihad of Abu Dhabi.

But at least one flight attendant — or butler — has seriously elevated her career. American Priscilla Martinez came to Crystal from Spirit Airlines, the Florida-based ultra-low-cost carrier that offers absolutely no frills and provides the most frugal flying experience in North America.

Martinez said she loves flying and appreciated her start at Spirit but is happy now to add a “customer service” dimension to her job.

Crystal’s operation is customer service at a level Spirit passengers may barely imagine.