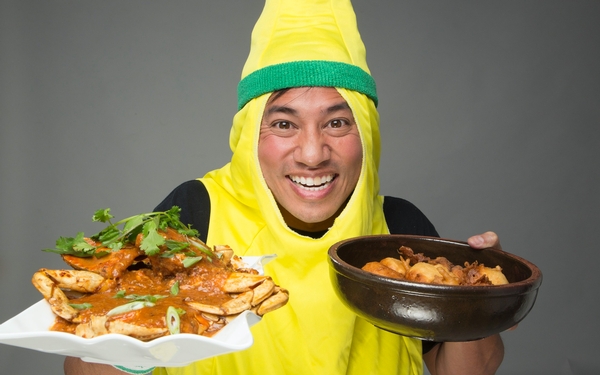 By his latest count, Nguyen Tran figures he probably has 15 costumes. The face behind the restaurant and brand Starry Kitchen just deposited two large bags’ worth of clothing on the counter at the Los Angeles Times Test Kitchen. Nguyen’s wife, Thi — the other force behind the brand — is busy unpacking and arranging the components for several outfits — including one space helmet — as Nguyen fiddles with a box.

“Anyone have a screwdriver? I need a Phillips head. Oh, and put the crab in the freezer.”

There’s a happy chaos as Nguyen inflates one of the costumes, a tauntaun snow lizard from the movie “The Empire Strikes Back.” Meanwhile, one of his assistants corrals a live Dungeness crab for Nguyen’s recipe demonstration while another follows the Trans’ 17-month-old son, Cillían, around the kitchen.

Nguyen is here to demonstrate the recipe for Singaporean chili crab with buttermilk beer beignets, one of Starry Kitchen’s more famous dishes and among the recipes included in Nguyen’s new book, “Adventures in Starry Kitchen: 88 Asian-Inspired Recipes from America’s Most Famous Underground Restaurant.” Part cookbook, part history and part guide to running an underground restaurant, the book shares Nguyen and Thi’s journey through the food world.

As he stirs a quick beignet batter, Nguyen explains the genesis of Starry Kitchen. “Thi and I love to eat. It’s that simple,” he says. That, and Thi has always been an amazing cook. “Thi’s way more talented than me in the kitchen. I give her full credit.” Nguyen frequently comes up with ideas, and Thi will see it to completion. He credits her with coming up with most of Starry Kitchen’s dishes, including the spicy crab dish.

“I’m the face of Starry Kitchen,” Nguyen says, because Thi hates being on camera. “But she’s way funnier than I am.”

Starry Kitchen takes its name from a popular Cantonese cooking show broadcast on a cable channel out of Hong Kong, and the Trans’ brand can be traced back to 2008, when the couple began hosting underground dinners out of their tiny apartment in North Hollywood.

Before long, the wildly popular dinners earned praise from Yelp and scrutiny from the health department, and the Trans moved to their first brick-and-mortar location. Over several tumultuous years, the Trans would resurrect themselves and their brand as restaurants and pop-ups, weed dinners and delivery service, catering jobs and their latest brick-and-mortar establishment, Button Mash, in Echo Park.

Nguyen needed time to think. He’d been offered a book deal, and after a month of unemployment decided to start on the cookbook. “One, I wanted to tell people the real story about what happened to us. The other is to inspire people to either start a restaurant — or not,” he says. “No one gets how hard it really is.”

“Adventures in Starry Kitchen” contains 88 recipes, including the restaurant’s famous tofu balls. In addition to smaller recipes that generally serve two to four, the recipes include a “Balls Out” ingredients list offering much larger portion sizes, on average 40 to 80 servings. “I wanted this to also be an illegal underground handbook. I figured if someone wanted to start their own underground restaurant, this would help,” says Nguyen. “I just hope they invite me.”

Starry Kitchen’s recipes are a mash-up of cultures and flavors, which Nguyen sometimes refers to as Pan-Asian American food. Both Nguyen and Thi are from Texas, and the dishes largely draw inspiration from a variety of Asian cuisines with an American twist such as the crab, which is served with beignets, or the cookbook’s chicken-fried steak, which they serve with a Japanese curry roux.

“We live in Los Angeles, and we might look at Irvine or Orange County as suburbia — but no,” says Nguyen. “I lived in real surburbia in Dallas. Everything is a chain restaurant or a big box store.

“I was so limited as a kid. I didn’t want to be chastised for not being white. It held me back.”

Nguyen’s parents are originally from Vietnam, and it wasn’t until he visited that country that he began to embrace his Vietnamese background. And as he started celebrating his Vietnamese heritage, he also began to cherish his Texas roots.

The crab dish is Starry Kitchen’s take on a famous Singaporean dish, and it took the Trans two years to develop it before they began serving it at their restaurant. In the cookbook, Nguyen claims that his is only one of seven restaurants in North America to offer the dish.

Originally, the Trans served the crab with fried steamed buns. Then they thought of buttermilk beer beignets.

“Being from the South, we used to go to New Orleans a lot,” says Nguyen, gently dipping mounds of beignet batter into hot oil using an ice cream scoop. “Thi came up with the idea for savory beignets.”

As he plates the dish, Nguyen thinks about the future. Much as they’ve loved their journey, they don’t see themselves running restaurants day to day, particularly now that they’re parents. Nguyen is looking into mass-producing Starry Kitchen’s tofu balls, and thinking of opening up other Starry Kitchens, but as something more akin to a franchise concept.

Before he takes the finished crab dish into the photo studio for a final shoot, Nguyen slips into his banana costume. Outside the Test Kitchen display window, a small group of people has gathered.

“The thing about the banana suit is the response you get from it. It makes people happy,” he says. Starry Kitchen has a reputation for being fun and crazy, Nguyen acknowledges — in his banana suit — noting that how much thought goes into the food, and how serious he and Thi are about each dish and technique, can get lost.

“But then, people shouldn’t always be too thoughtful about food. Sometimes eating is just about having fun.”

In a mixing bowl, whisk together the stock, ketchup, soy sauce, chili garlic sauce, rice vinegar and sugar until they become one unified homogenous mixture of red chili sauce. It should taste spicy, sweet and savory and not too ketchup-y.

1. Shortly before cleaning and cutting the crab, place it in the freezer to slow it down and make it sleepy. Clean and cut the crab: Grab the crab from the tail end and flip it over so it’s belly-side up, claws and eyes facing away from you. Lift the triangular lip in the center of the abdomen over carefully, as the crab will be agitated (lifting the lip exposes the crab’s most vulnerable spot).

2. Quickly stab the crab downward through the exposed spot until you reach the shell. Hold for 10 to 20 seconds; the crab should die almost instantly.

3. Cut the crab through the abdomen in half, snapping the crab in two. Turn each half over and remove and dispose of the white gills. Dispose of the lip and any other loose appendages from the front and back of the crab, along with the white film and any black matter inside of the shell itself. Do not clean out the rest of the shell (particularly the orange part, or coral).

4. Depending on how large your crab is, the two halves can be cut into 2 or 3 sections (there should be a minimum of 2 legs per section). Clean the crab legs again and pat dry with paper towels.

5. Place the crab in a big bowl with the cornstarch. Dredge the exposed crab parts of each of the pieces, including the coral and head, inside and out with starch. Shake off the excess starch.

6. Fill a wok or pot with enough cooking oil to easily submerge the crab pieces, including the head. Heat the oil to 350 degrees over high heat.

7. Carefully fry the crab in batches until they are red all over and the battered parts are golden. Remove, shaking any excess oil over the pot. Set aside on a rack set over a baking sheet until all of the crab is fried. Cover and refrigerate the crab, up to 24 hours.

8. Heat a wok or large pan over high heat, adding 1 tablespoon of cooking oil. Sauté the garlic, shallots, ginger, chile and green onion until aromatic (enough to make you cough — that’s how you know you got the good stuff). Add the crab, stirring quickly for 10 to 15 seconds, then add the chili crab sauce. Cover and cook over high heat for several minutes to marry the flavors.

9. Reduce the heat to low and remove just the crab, placing it on a serving dish. While reconstructing the crab on the platter, crack the eggs in the sauce and quickly mix to fully incorporate, thickening the sauce. Increase to high heat and reduce the sauce to desired thickness.

10. Remove the sauce from heat, and pour the sauce all over the crab. Garnish with green onion and cilantro.

Note: Adapted from a recipe in “Adventures in Starry Kitchen” by Nguyen Tran. He recommends serving the crab with buttermilk beer beignets.

Special Features
Southern California has given the world so much. And fast food too
1,255 views