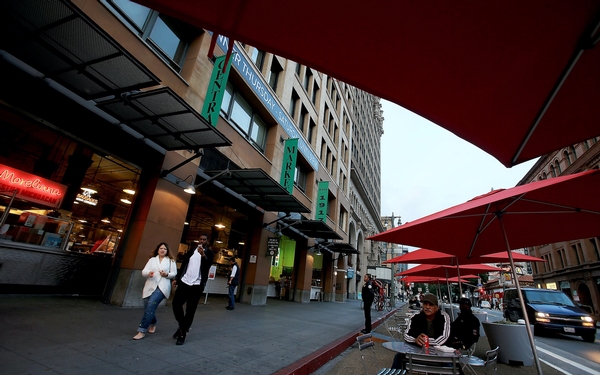 Umbrellas and chairs for dining along Broadway in front of the Grand Central Market in downtown Los Angeles. (Luis Sinco/Los Angeles Times/TNS)

From downtown Los Angeles to the Westside without a car, taxi, Uber or Lyft! For many Angelenos this is a thrilling, terrifying idea, a tightrope walk without a net in a stiff ocean breeze.

But you can do it. In fact, you can do it at least two ways, thanks to the Metro Rapid Line 720 and last year’s westward expansion of the light-rail Metro Expo Line.

I recently road-tested this idea with such encouraging results that I’m itching to do it again.

First, you roll by express bus from downtown by way of Wilshire Boulevard to the ocean (typically a 60- to 90-minute trip). Then you hop off in Santa Monica and return by train (47 minutes if all goes well). The combined cost? Just $7 (the price of a Metro Day Pass: lat.ms/metrodaypass). What else can you buy in L.A. for $7?

I never waited more than 15 minutes for a bus or train as I traveled between 10 a.m. and 5 p.m. on a Friday. Along the way, I spent time downtown and in Koreatown, along Wilshire Boulevard’s Museum Row and in Santa Monica near the beach and the Third Street Promenade.

I could easily have lingered in Westwood or Beverly Hills too; Wilshire touches both. And the Expo Line, not surprisingly, runs through Exposition Park.

THE HEART OF DOWNTOWN

Before you hop on the westbound Metro Rapid 720 bus on 5th Street near Grand Avenue, consider your urban options. About a minute’s walk away, you could step into the Central Library (630 W. 5th St., lat.ms/centrallibrary), climb one level and admire the globe-and-zodiac chandelier and the murals, which illustrate California history.

If you’re hungry, you might prefer to stroll eight minutes (by Google’s estimate) to the bustle of Grand Central Market (317 S. Broadway; (213) 624-2378, www.grandcentralmarket.com).

The hotel’s Spire 73, a rooftop terrace lounge that claims to be the highest open-air bar in the Western Hemisphere, gives you jaw-dropping views. It’s open 4 p.m.-12:30 a.m. daily. Want to get a room? Intercontinental rates start at $299 a night plus tax.

The Millennium Biltmore, Standard and Westin Bonaventure hotels are within a seven-minute walk from the bus stop, as is the L.A. Athletic Club (431 W. 7th St., L.A.; (213) 625-2211; laac.com), an underappreciated historic property that includes a 72-room boutique hotel (open to the public) and two semi-private restaurants (open to hotel guests and members).

The Athletic Club is old and invisible compared with that shiny new Intercontinental, but those are assets: The building dates to 1912, with wonderfully clubby furniture and vintage photos and artwork around every corner. Charlie Chaplin, Duke Kahanamoku and various 1932 Olympians are among those who used it. Rates typically start at $260 a night.

And now, to explore beyond downtown, you board one of those long, red-and-silver Metro Rapid buses that stop at 5th and Grand, then head west on Wilshire.

Once you’re rolling, keep an eye out for MacArthur Park (subject of the 1968 song sung by Richard Harris) and the old Bullocks Wilshire building, an Art Deco wonder at 3050 Wilshire Blvd. that’s now part of Southwestern Law School.

If you hop off the bus at Wilshire and Normandie Avenue in Koreatown, you’ll be almost directly below a big red-and-black mural by Shepard Fairey. That’s the facade of the Line Hotel (3515 Wilshire Blvd.; (213) 381-7411, www.thelinehotel.com), a trendy and recently revived property in a neighborhood known for its nightlife.

After the cool mural outside, the hotel’s dim lobby may not wow you. But one story up, there’s Commissary, a sort of greenhouse that’s a great spot for breakfast, lunch or dinner by the pool. Greenery is everywhere, and the walls and ceilings are mostly translucent.

Farther west, at Wilshire and Fairfax Avenue, you’ll see a jumble of construction that will become the westward extension of the Metro Purple Line, scheduled to open by 2023. The prize you’ve come for is Museum Row.

Hike a few blocks east from the bus stop to the Los Angeles County Museum of Art (5905 Wilshire Blvd.; (323) 435-9256, www.lacma.org, closed Wednesdays). LACMA is fronted by the “Urban Light” lamp-post installation by artist Chris Burden. In back is “Levitated Mass,” the 340-ton boulder that artist Michael Heizer selected and placed on the museum grounds in 2012.

You can see those for free. Roaming the encyclopedic art collection inside costs $15 per adult.

Next door is the kid-friendly La Brea Tar Pits and Museum (5801 Wilshire Blvd.; (213) 763-3499, tarpits.org), featuring perhaps the longest-running death scene in town: the doomed mock mammoth mired in tar in the park along Wilshire.

After appropriate grieving, choose your lunch from the dozen or so food trucks parked on Wilshire.

Also on the south side of the street is the Petersen Automotive Museum (6060 Wilshire Blvd.; (323) 930-2277, www.petersen.org, open daily), wrapped in stainless-steel ribbons after a dramatic renovation in 2015. Spend $15 per adult to explore its scores of vehicles, or just step inside and have a look at the gleaming specimens in the lobby.

If you’re a vigorous walker, stride 12 minutes north from LACMA to Farmers Market at 3rd and Fairfax. Its historic mix of market stalls, shops and restaurants is neighbored by the snazzy Grove shopping center and the irreverent Farmer’s Daughter Hotel (115 S. Fairfax Ave.; (800) 334-1658, farmersdaughterhotel.com), where rates begin about $230 a night.

If you’re inclined toward Beverly Hills shopping or gawking, your next stop will be Beverly Drive. Rodeo Drive and dozens of exclusive brand names can be found just a block away.

If you’d rather inspect edgy contemporary art or gaze at Marilyn Monroe’s grave, your next stop will be a bit farther west at Westwood Boulevard.

Hard-core walkers can make a side trip north through Westwood Village to the UCLA campus. As for Ms. Monroe, she rests on the calm, compact grounds of Pierce Brothers Westwood Village Memorial Park (1218 Glendon Ave.; (310) 474-1579, lat.ms/piercebrothers), home to dozens of departed show business luminaries. It’s a three-minute walk east from the bus stop at Wilshire and Westwood.

This is the big payoff — to reach a beach community without touching an automobile (except perhaps those at the Petersen Museum).

Whether you exit the Rapid bus in Santa Monica at 4th and Wilshire or at 4th and Santa Monica Boulevard, you’re within a block of the splendidly carless Third Street Promenade and its bevy of street performers and national brands.

Just beyond that, the beach, the highly photogenic pier and many hotels await.

Right now, with a renovation and expansion underway, the hostel has 171 beds. Around February, when work is done, the four-story building will have 273 beds. Dorm beds usually start at $38 a night (free breakfast and Wi-Fi). Private rooms typically cost $109 to $230 a night, depending on the season and whether you share a bathroom.

The pier is at the foot of Colorado Avenue. (It’s $8 to ride the Pacific Wheel Ferris wheel.) Depending on how much time you have, you can wander among the street and pier performers or sit for a meal.

And despite the mixed Yelp reviews, my daughter and I enjoyed the festive chaos and passable food of Mariasol (401 Santa Monica Pier, Santa Monica; (310) 917-5050, www.mariasol.com), the Mexican restaurant at the end of the pier.

To burn calories, rent a bike at Perry’s Cafe and Beach Rentals (www.perryscafe.com) on the sand north of the pier.

If you’re planning to swim, be advised: Heal the Bay’s Beach Report Card says water quality is often poor at the pier (lots of bacteria). The water four blocks north, at the foot of Wilshire, gets much higher marks.

To catch the train for the return journey downtown, head to 4th and Colorado, where the Metro station stands atop a little hill.

For most of its journey east, the train rolls above ground, following Exposition Boulevard and other streets south of Wilshire. You see fewer landmarks, but it’s a smoother, faster ride than the bus.

Your journey ends at Metro Center, 7th and Flower, four blocks from where you started your day boarding that westbound bus.