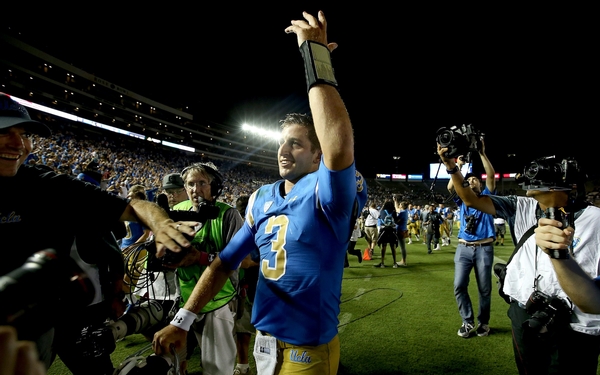 UCLA quarterback Josh Rosen walks off the field after engineering a 45-44 comeback victory over Texas A&M on Sunday, Sept. 3, 2017 at the Rose Bowl in Pasadena, Calif. (Luis Sinco/LA Times/TNS)

The seemingly impossible happened Sunday at the Rose Bowl.

UCLA completed a comeback from a 34-point deficit with 35 unanswered points starting late in the third quarter, pulling out a stunning 45-44 victory over Texas A&M in the Bruins’ season opener at the Rose Bowl.

Two plays after UCLA receiver Jordan Lasley dropped a third-down pass at the first-down marker, he pulled in a 10-yard touchdown pass with 43 seconds left, twisting his body in the back of the end zone to make the catch and tie the score.

UCLA’s J.J. Molson then booted the most meaningful extra point of his career through the uprights to nudge the Bruins ahead for the biggest comeback in school history.

The Bruins (1-0) then stopped Texas A&M quarterback Kellen Mond a yard short of a first down on fourth and 10 after a lengthy review. After the final snap, several Bruins sprinted over to the student section to celebrate. Their teammates soon followed.

Caleb Wilson led the UCLA receivers with 15 catches for 203 yards, both career highs.

Trayveon Williams had 203 yards rushing for Texas A&M (0-1), which was held to 58 yards in the fourth quarter.