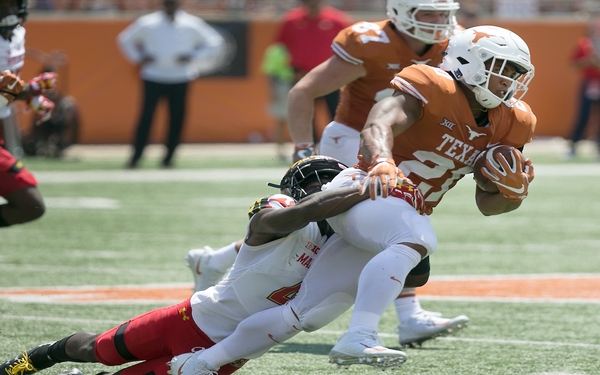 Check out the top 10 things we learned during the first full Saturday of college football action.

—Alabama is back — or perhaps Nick Saban’s team actually left. There were no lingering effects from that last-second loss to Clemson in the national title game Saturday. The Crimson Tide demonstrated without a doubt this team is the best college football team in the nation with a win over No. 3 FSU.

—Things could not have gone any worse for Florida State. Not only did the Seminoles suffer through a slew of errors on special teams that contributed to the team’s 24-7 loss to No. 1 Alabama Saturday, starting quarterback Deondre Francois suffered a season-ending knee injury.

—It’s time to hit the panic button at Florida. Despite comments to the contrary by coach Jim McElwain, the Gators have some serious problems with an offense that managed just 192 yards and three points during a loss to Michigan. It was Florida’s ninth loss in the past 12 games versus ranked foes during McElwain’s tenure.

—Texas-sized expectations were perhaps too much for the Longhorns. There’s no doubt Tom Herman will eventually lead the Texas football program back into the national title discussion, but right now the program needs time and patience from the fan base before it can starting winning consistently.

—Cupcakes are delicious but not always good for our viewing diet. While the first week of the season brought us some great matchups, including Alabama-FSU and Florida-Michigan, there were also a lot of lopsided games that were definitely good for the win columns of power programs but not so good for fans.

—Good thing we play four quarters of football. As one might expect during the first week of action, there were a lot of ranked teams who needed to knock the cobwebs off before settling into comfortable wins. Ohio State, Washington, Wisconsin, USC and Louisville got off to slow starts before earning victories.

—Never bet against Howard. OK, maybe never is a stretch but the Bison were a 45-point underdog heading into their showdown with UNLV on Saturday and yet Mike London’s team pulled off the biggest upset in college football history by handing the Rebels a stunning 43-40 loss.

—Kelly Bryant isn’t Deshaun Watson and that’s a good thing. Clemson’s new starting quarterback stepped into the spotlight vacated by Watson and didn’t appear to miss a beat with 313 total yards of offense and two touchdowns as the Tigers earned a 56-3 win over Kent State.

—Lamar who? Lamar Jackson may be the reigning Heisman Trophy winner, but the Louisville quarterback has been conspicuously absent in a lot of preseason college football hype. Just in case you might have forgotten about him, he accounted for 485 yards of total offense and two scores during a win over Purdue.

—There is plenty of goodness in college football. Nothing showcases that more than USC sending blind long snapper Jake Olson out to assist with an extra point during a win over Western Michigan. The move fulfilled a lifelong dream for Olson, who lost his sight to cancer when he was 12 years old.