Through her evocative music, Bedouine brings a world of insight and emotion to her new home 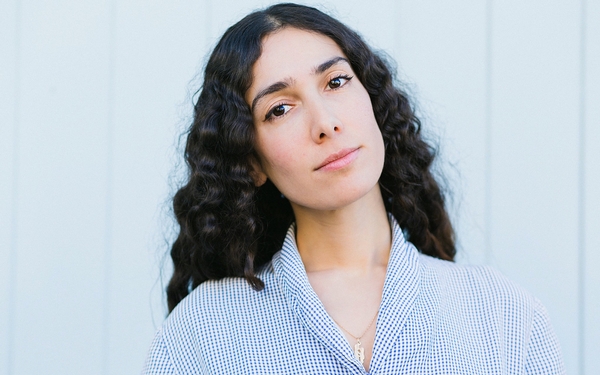 She sat at a window in her whiskey phase, writing songs and blowing smoke over Sunset Boulevard, listening to the rattle of buses, the whispers of passersby, and the way the night moved in spectral cadences that made the wanderer in her feel alive and alone in the latest city she called home.

When the noises grew too loud, which they often did, Azniv Korkejian escaped into a closet with a guitar. She sang and recorded on an iPhone, sketching sparse and intimate meditations on love and the things you gather, the pieces you leave behind. She took on the name Bedouine, a fitting alias for an Armenian born in Syria, who is at once a minimalist nomad and a musician in search of the stillness between notes.

Her acclaimed debut album, “Bedouine,” is an arresting mix of country funk and ‘60s folk that moves in timeless meandering often accompanied by string and horn arrangements. The songs have a destination, but the journey is a soft circuitry of words and phrasings that at their best evoke the imagery of Leonard Cohen and Carole King with the lingering mournfulness of Nick Drake.

The song is a celebration of self, a writ of independence against the messiness of a breakup. “It was an aggressive response to this relationship that I was in the middle of,” she said the other day in her Echo Park apartment. “I just realized it was all on this other person’s terms, and I had this moment where I just wanted to rid myself of it and push the reset button. The illusion of the relationship shattered.”

Like many musicians who have settled here, from Rachmaninoff to Joni Mitchell, Korkejian found a touchstone in Los Angeles in 2011. She was drawn to the way the city moves and conspires amid fluid borders and creative voices, a number of them from a collection of Echo Park musicians, including her producer Gus Seyffert, who has collaborated with Norah Jones, Beck and Roger Waters. Her words sharpened here; her voice, even in that closet, took shape.

Echo Park hums with foreign syllables. It’s a stretch of clubs, cafes, ripped jeans, Web designers, working-class grit and murals, like the one of a river coursing through a green and blue land of promise. These scenes mix with ghosts of the past as the hill ascends toward the restored Victorian homes in Angelino Heights. Korkejian’s neighborhood is a map of creeping gentrification and battered holdouts. Security bars protect homes while luxury cars park around Echo Park lake, where water shoots in spires against the rising of a reimagined downtown.

“L.A. is where I found my sense of conviction,” said Korkejian, 33, who has played local clubs including the Satellite and Bootleg Theater. “It had to do with the people I was meeting.”

“Solitary Daughter” and other tracks on the album, released by Matthew E. White’s Spacebomb Records, are bringing Korkejian praise. She has been featured on National Public Radio, opened for Fleet Foxes in the U.S. and has shows coming up in England in October. She is happy with the recognition, but it has forced adjustments; songs written alone in the pitch of night have suddenly found wider resonance and edged her unexpectedly into the limelight.

“I’m bracing myself for it,” she said. “The older I get, the more easily I get overwhelmed. I like to be in control of my surroundings. I require a lot of quiet. Even in this apartment, I have control; it’s like a womb. It will be challenging not to immediately retreat if I need to … . I have my little village of people who want to help, and all the stars are aligning for me to have a chance to make it sustainable.”

“Her upbringing and the experiences she’s had create something more unique than what we’re used to hearing,” he said, remembering when his band shared a stage with Korkejian and Michael Kiwanuka, a soul singer whose “Cold Little Heart” set the mood for HBO’s “Big Little Lies.” “It was funny, because a lot of people came out for Michael. But when she went up to play, man, she can really demand attention. I’ve seen her just completely shut up a room full of people.”

The daughter of Armenians from Aleppo, Syria, Kor-kejian, whose day job is a freelance film music editor, has rippled dark hair, loop earrings and the sly air of an immigrant who knows places not found on a map.

She lives above a tattoo parlor and a tax office. Her new apartment — a quieter one across the hall from the one that faced Sunset — is as pared down as her lyrics: a Picasso poster bought from a secondhand store, a 1930s parlor guitar made of Brazilian rosewood and tins from her grandmother’s house in Aleppo.

Many of her relatives remain in Syria, and the house is evoked in “Summer Cold,” a song inspired by how U.S. weapons bound for Syrian rebels end up in the hands of Islamic State and other terrorist groups. “You say is this the end,” she sings. “I’ve had enough of your guns and your ammunition.” The song closes with the alley noises she heard as a child outside her grandmother’s window: voices, horns, bird calls, donkey hooves.

“Summer Cold” is only two minutes and 49 seconds long. “Brevity is a very conscious choice,” she said. “How succinct can I be while digging deeply?”

Korkejian’s voice slips like a breeze through a window crack. It can start low, curl into defiant seduction but hang understated and restrained, as if someone is sharing secrets with you in the lost hours between last call and dawn. She often types lyrics on her iPhone and does little to proffer the myth of the tortured songwriter adrift in sheaves of scribblings.

“I wrote a song called ‘Deep Space’ on a plane as I was talking to a guy who lives on the Marshall Islands,” she said. “He was a technician for the satellites in deep space.”

Korkejian spent her early childhood in Saudi Arabia, where her father worked for a company that managed security in housing compounds for Americans and other expats. “I went to an American school,” she said. “All my friends spoke English.”

The family won a green-card lottery and moved in 1995 to the Boston area, where she played trumpet in a marching band. They later settled in Houston; her father ran a TV repair shop in “what was a very immigrant story.” She has also lived in Kentucky and Georgia, where she studied sound design at the Savannah College of Art and Design.

Her songs speak to her restlessness. “You Kill Me” starts with the lyrics, “Some nights I get into the car and drive/nowhere really could keep me satisfied.” In “Skyline,” she’s “alone on the train/I’m free as a bird.” The sojourning led her to Echo Park, where, at least for the moment, she has made a home. She recently worked with composer Michael Andrews editing the music to the summer indie breakout film “The Big Sick” and is close to Seyffert, who these day is touring with Waters.

“Gus was the analogue tape guy,” she said of Seyffert. “I felt you could make a really sparse record on tape. That same feeling doesn’t come across on digital. Gus is on the road a lot, and when he’s home, he wants to record stuff he believes in. So I reached out to him a couple of times. He was really busy, but once he said, ‘Just come on over.’”

They began working together and over several years recorded about 25 songs. They disagreed at times over Korkejian’s voice: She prefers the lower registers; he pushed her to go higher. “She can be defiant,” said Seyffert, laughing. “It was a labor of love. It was that relationship between us. She was putting her songs through my filter, and for whatever reason it seemed to work really well.”

The songs were sent to White, whose Spacebomb label had put out an album by Natalie Prass that featured classical arrangements Kor-kejian admired. “I thought it was so rare that a record like that could come out these days,” she said.

Spacebomb released “Bedouine” in June. “It’s been so wild. I still can’t believe it,” she said. “It’s just as much to do with the writing as the production.”

The production was pared down the other night when Korkejian played a set at the Bardot, which sits across from Capital Records and has the air of a Moroccan tea house imagined by a Hollywood set designer. The singer before her tapped music from a laptop and sang about monsters. The crowd was mostly young: T-shirts, light beards, denim, tattoos and nursed beers. A few older men with tans and gazes accustomed to the dark were sprinkled at the edges.

Korkejian wore a dress with embroidered sleeves, as if a desert troubadour arrived from a caravan. She held her guitar and stepped to the microphone. As the songs went by, the club quieted and more people turned toward the stage. Her face betrayed little; the power, color and restraint were in the inflections, the slip and spin of syllables. By “Solitary Daughter” — “I’m fine by my lonesome/I feel right at home” — the crowd was silent.

The only voice that needed to be heard was coming from the spotlight.